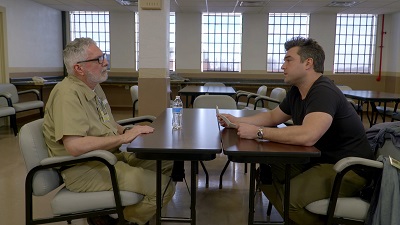 Barbara Kopple’s latest documentary revisits a high profile domestic murder case in Mansfield, Ohio in 1989, and reveals how this tragedy continues to haunt. In vérité style, Kopple follows thirty-eight-year-old Collier Landry as he returns to his hometown, where at age eleven, he witnessed the murder of his mother Noreen Boyle by his father, an osteopath Dr. John Boyle. At the time, Landry (then Collier Landry Boyle) took the stand in court against his father. Dr. Boyle is now serving a life sentence at a nearby penitentiary.

Collier Landry is a brave man, not only on his journey back to the traumatic place of his mother’s murder, but also in having his painful homecoming documented on camera. Today, Landry himself works as a cameraman and director in Los Angeles. However, in this film, he steps in front of the lens, and allows two-time Academy Award-winning filmmaker Kopple to chronicle his story and the true crime drama surrounding it.

Kopple is no stranger to making documentaries rooted in trauma. Since 2008, she has made two extraordinary films, focusing on women exposed to violence and their personal paths toward healing: Mildred Muhammad in The D.C. Sniper’s Wife (2008) and Mariel Hemingway in Running from Crazy (2014). In these two documentaries, women experienced devastating traumas due to the violence of family members. In Mildred Muhammad’s case, her estranged husband, John Muhammad, had gone on a rampage, killing seventeen people in the D.C. area in 2002. Mariel Hemingway, great grand-daughter of Ernest Hemmingway, confronted a family legacy of mental illness and suicide.

Returning to his hometown, Landry’s first visit is to a local radio show in Mansfield. In an interview, Landry clarifies his purpose in coming back. He wants to “do something positive about this tragedy,” and to help heal the community and himself. Making this documentary is his way to use “art” to heal, says Landry.

Throughout the film, Kopple interweaves segments of the 1990 television news reports of the Boyle murder, and in particular, the courtroom testimony of eleven-year-old Collier, which was broadcast live. Watching the trial at the time was “better than a soap opera,” says one viewer. From the news coverage the details of the murder are uncovered. Evidently, Dr. Boyle hit his wife Noreen in the back of the head with a hammer, and then put a plastic bag over her head to suffocate her. He buried her body under the concrete in the basement, using a jackhammer to break up the floor. Boyle’s apparent motive was that his girlfriend, Sherri Campbell, was carrying his baby.

Based on the initial testimony of both eleven-year-old Collier and his three-year-old sister Elizabeth, Dr. Boyle was arrested. Later, the investigators found the jackhammer and then the body of Noreen Boyle. Today, Landry has no regrets helping to send his father to prison. As he states, “I did right by my mother.”

In Mansfield, Landry re-visits the house where he had grown up. In an almost reality-show-like scene, Landry rings the doorbell and asks the family who live there now if he can come in and see his old home. Annie and Matt Trammel generously let Landry and the camera crew enter their home. In the absence of evidence, such as home movies, Landry improvises. Standing in this house, which no longer belongs to his family, he conjures up the memories of his childhood.

In his old bedroom, Landry recalls how he lay in a fetal position, as his father stood in the hallway outside his room to see if he were awake. Landry is convinced he would be dead with his mother, if he hadn’t pretended to be asleep. In his mother’s office, Landry describes how he used to play on the computer, until his father viciously reprimanded him. The film cuts to the live testimony in the courtroom, where young Collier is asked about his relationship with his father. Collier tells the court about that time when he was playing on the computer and his father called him, “a stupid, little fat boy,” and then insisted that Collier repeat the line.

In his former home, Landry braves going up the stairs to his mother’s former bedroom. He says he can feel her presence there. As Landry is leaving, Annie Trammel gives him a hug and tells him, “You’re welcome here anytime.” Landry is clearly moved and appreciative.

After the trial, twelve-year-old Landry lost everything: his family, his home, his childhood. Landry and his baby sister Elizabeth were adopted by different families. The school principal adopted the girl, who had originally been adopted from Taiwan, by the Boyles. During his return to Mansfield, Landry is eager to re-unite with his sister. He tries to call her, but she never returns his call.

Meanwhile, Landry visits Lieutenant Dave Messmore and his wife Susan. Messmore was the lead investigator in the Boyle case and Landry spent a lot of time at the Messmores’ home. Susan recounts how they had wanted to adopt young Collier, but that the judge did not grant them adoption because of her husband’s involvement with the murder case.

In the end, George and Susan Zeigler adopted young Collier. In an interview with Kopple, George Zeigler explains that they wanted to let Collier stay in town to be near his friends. They are proud of the strict and honest home they provided for him. When Landry visits, he seems comfortable but not as affectionate with them, as he was with the Messmores.

At his former high school, Landry is given an enthusiastic reception by teachers and students. He had been elected class president two years in a row, and sang in the student choir. “When I found my voice, the whole world opened up to me,” Landry confides. He encourages the choir students to keep singing.

He also visits Shelley Bowen, his mother’s best friend. Of all the residents in Mansfield, she appears closest to Landry. Bowen tells Landry how important he was in his mother’s life. “You were the world to her,” she shares. She also reveals that his father was a womanizer with a series of girlfriends. When the last girlfriend had a baby coming, Bowen explains, Noreen filed for divorce before she was murdered.

Landry also learns more details of his mother’s death by examining the investigation records with Lieutenant Messmore. When he sees for the first time, the photographs of how his mother was found in the concrete with plastic bag over her head, Landry breaks down.

At the heart of his homecoming, Landry has a mission. He wants to visit his father in the nearby penitentiary, and ask him tell the truth about the murder. Over the years, Landry had written his father in prison. In his letters, he repeatedly asked his father to admit to the murder of his mother. If Boyle could do this, Landry proposed, then he could forgive him. In letters back, Boyle responded by declaring he was “guilty of no crime.” Angered by his son’s questioning, he wrote to his son that he was “evil,” and abruptly ended their correspondence by sending back Landry’s last letter, unopened. However, when he was up for parole in 2010, Boyle began corresponding with his son again, mainly because he needed his help in being released. At that time, Boyle admitted that he was “responsible” for his wife’s death. Boyle claimed he had pushed his wife downstairs in the living room, and then blacked out. When he woke up, she was dead. Though Landry knew his father was not telling the truth about her death, he still wrote on his father’s behalf at that time. Despite his writing, Boyle was denied parole. 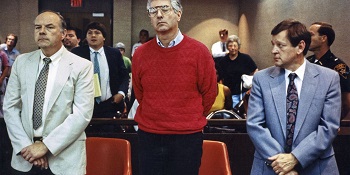 Now, Landry wants full disclosure about the murder. He arranges to meet his father at the prison. Before the meeting, Landry sees psychologist Dr. Dennis Marikis, who he’s known since high school. Dr. Marikis warns him that his father may still not cooperate, even 26 years later. He asks Landry why he wants this confession from his untrustworthy father. Landry thinks it will bring a sense of closure.

In the penitentiary, Kopple interviews John Boyle before the father-son meeting. Boyle explains that in prison, he advises other inmates in “grief” counseling. Without a hint of feeling, he further elaborates that this is his way to make amends for Noreen’s death.

The powerful confrontation between son and father is at the core of this documentary. In a stark room, Landry and his father face each other for the first time. They share some small talk, and then Landry asks if he can open and read the letter his father had refused to read years ago. Now Boyle agrees to hear it. In the letter, Landry writes that he wants to “forgive” his father, but cannot until his father admits to the murder. One final time, Landry asks his father to tell the truth. Nearly three decades after the event, spending his life behind bars, Boyle still is not willing to admit to the murder. He explains to Landry again that it was “accident.” He recounts that Noreen came after him with a knife in the downstairs living room. Boyle merely pushed Noreen too hard on the floor, and she died. Landry shakes his head. He’s seen the material evidence in the investigation files. “We have to go. Our time is up,” states Landry as he rises to leave. There are no tears, only a tentative embrace between father and son, and then Landry departs. Afterward, Boyle, still wearing the microphone, is heard off-camera telling the guards, “I’ll never abandon him. I just don’t know if he will ever talk to me again.” Clearly, the visit was as emotional for the father as it was for the son.

Landry returns to the therapist’s office. With Dr. Marikis’ help, Landry arrives at the realization that his father will never be the truthful and remorseful man he needs. Marikis suggests that forgiveness may not mean reconciliation but “letting go.” Knowing he has “lost” his father, Landry comes to feel a “sense of relief.”

A Murder in Mansfield is a seemingly simple documentary, following Collier Landry to his hometown to confront the truth about the murder of his mother by his father when he was a boy. The film is layered with news reports and original investigations of the tragic past. While the film reveals little about Landry’s adult life today in Los Angeles, its tight observational focus bears witness to the raw reality of Landry’s trauma, and the losses of his family – his murdered mother, and his father, who lives in denial in prison, and his estranged baby sister. A Murder in Mansfield stands out from other true crime documentaries that often expose the graphic details of a violent crime, without connecting them to the persistent anguish of individuals living in the aftermath of tragedy. With Kopple’s empathetic gaze, A Murder in Mansfield chronicles one man’s courageous struggles with memory and trauma. In the end, there is a sense of incompleteness to Landry’s journey. However, precisely because of this lack of resolution, Kopple’s documentary comes closer than most to capturing the authentic experience of trauma.

A Murder in Mansfield premieres tonight at DOC NYC.

Kate Hearst is working on a book, The Cinema of Barbara Kopple: American Activist. She earned her PhD and MFA in Film at Columbia University and has been teaching film history since 2011. Her interview with Kopple is forthcoming at Film International 16.3.