A Comeback and a New Beginning: Jackie Earle Haley on Criminal Activities 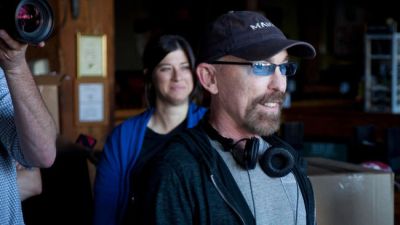 Like many child actors, Jackie Earle Haley faded from the spotlight as he reached maturity. He was relaxed on camera, which helped him exude cool as a lost youth finding a talent in The Bad News Bears (1976) and a teen making steps to adulthood in Breaking Away (1979). Curtis Hanson’s Losin’ It (1983) offered Haley the lead, and the unfavorable response made the situation a rarity. He found himself in occasional supporting roles on TV and out of work by the early 90s.

His triumphant comeback came in 2006 thanks to a suggestion from friend Sean Penn, who thought Haley ideal for the role of “Sugar Boy” in the Penn vehicle, All the King’s Men. Haley’s Oscar-nominated role as Ronnie McGorvey in Little Children (of the same year) depicted him as a monstrous presence invading or occupying what is taken to be normalcy. It’s the type of role he returned to in the 2010 Nightmare on Elm Street remake (as Freddy), Lincoln (2012, as the goblin-like Vice President of the Confederate States, Alexander H. Stephens), as well as Shutter Island (2010), Dark Shadows (2012) and Watchmen (2009). Working with a variety of directors in recent years, Haley could fulfill his lifelong wish to direct a film with the new, fun little ironic thriller, Criminal Activities.

In the phone interview transcribed below, Haley was thrilled to discuss his place behind the camera, a role that he hopes will grow as he stays prominent onscreen. He remains reticent to discuss his iconic roles as a kid (“that’s quite old” was his reply to a mention of Losin’ It). His open aesthetic and democratic approach behind the camera reflects the varied career he’s had, then and now.

It was great to see your return to acting, back in the middle of the last decade.

Can you remember when you first got the inkling to direct?

In earliest projects I ever acted in. I was always very curious about what the director was doing. It was definitely there by the time I was ten or twelve. I used to run around with a little Super 8 camera and I would work on a little editing machine when they had to literally slice the film to make edits. [A director] is something I’ve always wanted to be.

Did you always want to try a crime film and work in a genre like this one?

I’ve always just wanted to direct. There are specific things I’ve always wanted to do, poignant topics that resonate politically to me, but I like all genres – to me it’s more about finding a really good script. When I told my agent [I wanted to direct] he asked what kind of movies I wanted to make. I don’t want to get pigeonholed into one genre; I like them all. If I’ve got a great script, I don’t care what genre it is, whether it’s a tear jerker or a whether it’s a funny ride like [Criminal Activities], or whether it’s something that resonates politically, or whatever, I’m interested. With this film it started with a good script, and we had a producer who wanted to finance this film. After he contacted me, I immediately called him back and said I’m in.

It’s really common to get a script that’s almost good and you have to figure out if it’s good enough to get to this place where you want to direct it. With [Criminal Activities] the script was very close, lacking just minor elements. 90% or 95% of all of the scenes were there, and all it needed were some logistical shifts.

How important was casting this film?

There are tons of important things for any director, but the most important decision, I think, is casting. I don’t ever want to have to pull the lines out of anybody. You kind of have to do that with younger actors, sometimes. But when it comes to the main guys, everybody’s dialed in, they’re great actors, they’re right for the part. You know, you do more angles and get more takes and have more options in the end because you’ve picked people who are absolutely right for the role and awesome at what they do. This particular cast, to me, is just a wonderful ensemble.

How did Michael Pitt respond to the script originally? Was he in right away?

He liked the script, and I thought he was right for this part. His character in this movie is a kind of an alpha male dude. He and I had a Skype call at first, which went well, and he signed on.

The cast members seemed very comfortable with each other.

That was really important for me. I wanted to show that these guys went to high school together and had spent a lot of time together and now, here they are, in this fish-out-of-water predicament.

Do you remember watching a specific director when you were younger, like one filmmaker you worked with who really inspired you?

I can’t really think of one director. I know I always wanted to direct and really paid attention to what everybody was doing. It’s fun watching how everybody works differently. In seeing all the directors I’ve worked with, each one has a different approach to how they draw a performance out of artists. You’ve got some guys who just hit the set running, just know what they’re doing, camera angles are all set, and they go. You know, it’s interesting how two different directors work with different actors. I got to understand that a little bit better from this movie, finally being a director. An interesting part of the collaborative process is working with different people.

With this film, I wasn’t really going for my own style. I just liked the script so much that the movie slowly evolved and so did my approach to the material. It began with casting all the characters. This was when I started to see how I would approach directing and I started to feel like I had the right vision for it, as opposed to try to give it style. In a way, the style is in the script, and I just had to find a good way to cinematically tell that story.

Did you try to embellish the humor from the script? Is this one of the changes you made when you tweaked it?

You know what, I tried to make [the humor] a little more grounded. I felt like everybody played it grounded, that the humor, which was apparent in the script, would just come through. There are spots in there where I thought of embellishing the humor on the set, but for the most part I kept it grounded because it was written that way.

Would you like to see yourself focusing on directing more than acting in the future?

Well, I wouldn’t say I’d prefer to do one more than the other, but I will tell you that I’m very passionate about directing. I’m passionate about acting, but I really do want to put a lot of focus on directing more. The whole time I worked through this movie I was very confident and knew what I was doing. And everyone around me was really good at what they did – I had a great crew, a great cast and it came together well and I really hope I get to do that again.

If you had your choice of projects next, what would you want to do? What type of film?

You know, it’s hard to say. It’s all about good scripts. I need to find a good script, and I’m interested. I think I could work in any genre, if the project is a good and I can have fun doing it. I would love to run into a great script that appeals to issues that politically resonate with me or that I would make on some deeper levels. And this movie is not that – it’s a fun ride, and just a well written script. And to me, that’s one of the hardest things. There are so many scripts out there but they need a lot of work. I’d love to do a horror flick but I’d need to find that really good horror script. I’d like to do an action movie, too, but I’m looking for [a script] that’s politically poignant, and speaks to my inner concerns. I just don’t know where I’d find that script.

Matthew Sorrento is Interview Editor of Film International. He teaches film and media studies at Rutgers University in Camden, NJ and is the author of The New American Crime Film (McFarland, 2012). He directs the Reel East Film Festival.