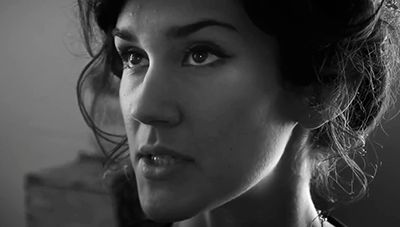 Film Scratches focuses on the world of experimental and avant-garde film, especially as practiced by individual artists. It features a mixture of reviews, interviews, and essays.

A Review by David Finkelstein.

The prolog to Mirror and Missal, Emmett Casey’s beguiling feature film, announces unequivocally that we are in the realm of myth. Francesca, a rich, powerful woman (Nicole Disson), hires a young female poet to steal the full moon for her. (We later find out that this rich woman is a choreographer, making it even more mythical.) But the film’s style, tough girl noir shot in black and white, keeps it from being cutely poetic or fey. Instead, the film harnesses the excitement of a well-made commercial thriller to an esoteric subject matter, a heady combination which immediately draws us in.

The remainder of the film takes place on a less mythical plane and concerns a community (mostly female) of artists, writers manqué, herbalists, and other creative types who inhabit Echo Park, a bohemian enclave in Los Angeles. But overtones of myth and fable are constantly peeking around the edges of the story, for example in tattoos which are alive, or letters that fly through the neighborhood on wings.

The film’s plot is a complex web of schemes, counter-schemes, murders, star-crossed love affairs, and intrigue, and the film’s style constantly refers to genre films such as Westerns and Nouvelle Vague. While the plot keeps us connected to the characters, it doesn’t feel as if the main concern of the film is to tell the story. Rather, like underground films from Robert Frank to the Kuchar brothers to Jim Jarmusch, the twisty plot is more a celebration of the pleasures of movies, and it serves as a pretext to paint a portrait of a time and place, to simultaneously mythologize and expose the kinds of communities in which artists live and work.

This inhabitants of this neighborhood exude a powerful charm, making us fall in love with many of them, despite their lack of artistic talent and their bad behavior. We meet Tori the female outlaw and herbalist (Melinda Stephan), Mike (a girl, Spring Ferrara), the loner who is Francesca’s antagonist, Tahira (Francesca Eaddy), a singer whose voice causes most men to fall for her. The story is mainly about the passing infatuations the characters have for each other, so it is only fitting that it is capable of producing them in the audience as well.

Two of the few male characters, Bryce and Jason (LeVance Tarver and Eddington Howard) produce a cable TV show called “Shout Show.” The short clips we see of the show, a neo-dadaist melange of meaningless but enthusiastic gestures and sounds, is one of the surprise pleasures of the film. It’s like the dream Public Access TV show we all need most when we can’t get to sleep at 1:30am.

A great deal of the film’s power to draw us in comes from the subtle jazz score by Cary Daniels and the beautiful cinematography by Colin Trenbeath, with occasional splashes of red accenting the black and white images. The film is a love letter to a place and a lifestyle, and a love letter to the movies, but one that self-consciously acknowledges the folly of love. In the film, the singer Tahira tells one of her admirers that their love was merely a beautiful glimpse and that she’d like to keep it that way. Mirror and Missal is that glimpse.

David Finkelstein is a filmmaker, musician, and critic. For more information on Film Scratches, or to submit an experimental film for review, contact lakeivan@earthlink.net.