was an international rescue service modelled on the British National Health system in 1966. The philanthropic heroes, in the who was that masked man? tradition, were the Tracy family, saving lives without a thought of profiting. No strings. It was unthinkable in the sixties to have the Tracy family charge for rescues. Puppet role-models in spectacular machines — in a children’s television series, created by Gerry Anderson, that was all about helping needy people free of charge.

Britain has sold out and moved on until this ethos is now itself unthinkable. It won’t fly.

National 2006 poll: 6 out of 10 people believed philanthropy was irrelevant and obsolete, but it turned out respondents were talking about stamp-collecting.

Role-models offered by television today are psychopathic chairmen who have hollowed out and run whole companies, and their staff, into the ground. They have more kinship with THUNDERBIRD arch-villain The Hood than with rescuers.

I mean, of course, greedy, lying, poisonous hustlers like Gerry Robinson and Alan Sugar, with no thought whatsoever for the good of society, whose short-term vision gives the shaft to the future, so mean-spirited and bent they need The Mole, courtesy of THUNDERBIRD 2, to screw their pants on in the morning.

Setting aside the film remake, a new THUNDERBIRDS television series would begin with the hostile takeover of all things Gerry Anderson by Gerry Robinson. Robinson would do to International Rescue what he did to Granada Television, and it would be seen as inevitable.

All collectable portraits and hi-tech revolving décor on Tracy Island to be removed to the Robinson estate. Cut-backs snip time-consuming practices: gone are the haulage winches, burrowing into the earth, and Parker’s lighting of Lady Penelope’s cigarette. Scott Tracy would spend a lot of time radioing trapped victims to establish what insurance they had. The information would be relayed to THUNDERBIRD 5, which would compute their solvency.

Victims would be offered a Premier Rescue Plan or a Budget Operation contracted out to private enterprises. The sweat on the brow of trapped puppets would be largely due to working out what they could afford as the clock ticked…

“Have to hurry you,” Scott pressuring them on the radio. “You’re running out of oxygen. You’ve GOT to make a decision!” 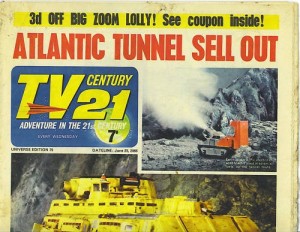 “Pull out! He’s never g-gonna make it, Scott!” Brains, emerging from the red of a debtor’s account: “He’s n-not gonna m- make it!” 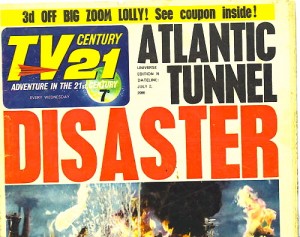 THUNDERBIRD 2 wouldn’t even clear the palm trees until payment was guaranteed. Virgil wouldn’t get off his lounger by the pool for less than two hundred grand. Direct debit to F.A.B.

Inevitably, priorities come down to the highest bidder for his own life. Now you can understand that, can’t you?

And the integrity of anonymity, so stressed by the Tracys, wouldn’t sell nowadays. The whole fucking family would be celebrities. Pilots, flying high.

Children all over Britain would aspire to be celebrity pilots with the clout to exploit disaster victims for a million buckaroos, yanking their strings till they pay up. Role-models! Kids would no longer congregate around terrestrial television to watch THUNDERBIRDS. Look to the future, and not too distantly: Rupert Murdoch holds exclusive rescue rights for satellite subscription — as you can see on the sponsorship logo on all aircraft. Tracy pilots are pressured to delay rescue till the last desperate moment to boost ratings.

Photo opportunity: Rupert Murdoch, famous philatelist, is flown out to extend a televised helping hand to humanity down an oil shaft. Headline: I Owe My Life to Murdoch Enterprises! 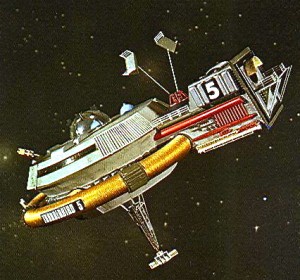 THUNDERBIRD 5 is a call centre. Calling International Rescue will put you in a call queue in orbit around the Earth with automated multiple menus. Press 1 if you are an existing customer. Press 2 if you wish to open a Rescue Account. Press 3 to make a payment. Press 4 if there is a problem with your rescue package. Press 5 if your crisis involves multiple clients.

Thank You. Continue to use your key pad. Now listen carefully. This is what we want you to do:

Press 1 if your disaster is in the western hemisphere.

Press 2 if your disaster is in the eastern hemisphere.

Press 3 if you are marooned in outer space.

Press 4 if you are trapped underwater.

Press 5 if you are on fire.

Press Star Zero to hear an explanation of SUPERMARIONATION.

Thank You. An operator will be with you shortly.

Hello. You have reached an Asian sweatshop phone network, orbiting the Earth. How can I help you.

Thankyou for calling the TUNDERBIRDS, and how are you to-day. All the operators ask the same questions in the same intonations and repeat your answers by rote as part of their training conditioning. Reassurances that you have been understood sound charmingly melodic but with no relation to semantics: the syllables might as well be notes on a xylophone…

Victims who die in the queue are not a negative statistic because they are not yet THUNDERBIRDS clients. They are merely dead people.

There are alarming repercussions nonetheless.

Tracy Senior is permitted to stay on as a lame figurehead — just as Granada chairman David Plowright was jerked around by Gerry Robinson and then shafted as surely as if he were bound and gagged by gangsters and pushed down a lift-shaft.

“Allen got rid of people on a psychological basis to assert his authority over the survivors,” said a THUNDERBIRD technician. It’s true: “He justified ‘an act of senseless brutality’ because it made the others think, ‘Good God, this man means business’.”[i] All you have to do is follow the reference.

This morally bankrupt millionaire brings his specialties of bullying staff to compensate for a coward’s squirming, viscous insecurities oozing within his Dalek interior, and of pocketing the family silver and sacking the old retainers like a spiv on a scam. A spiv on a scam who would roast his mother on a spittle if he could just figure out what wine went with incestuous cannibalism.

Polemic? Well, let’s split the difference with a cautionary word of advice passed down from North American Indians and Afro-Caribbean livestock to any peasant working the fields: Never underestimate how low the high and mighty can stoop or it will be the last thing you rationalise. Marvel at how Britain picks its heroes, cannibalising the mother lode and gnawing on human bonuses.

And as Lady Penelope’s layed-off chauffeur, Parker, goes back to safe-cracking, Robinson and Allen gorge themselves on bonuses and feed the shareholders by asset-stripping International Rescue of everything from Lady Penelope’s pink Rolls Royce to Brains’ glasses (both of which are bought by Elton John). The share price rises hand over fist on the profits of hocked resources. Robinson and Allen personally accrue thirty million pounds from International Rescue stock. And the only measure of success is the immediate profit turned over to shareholders. Investment now means the opposite of what it means.

Say what? Investment now means the opposite of what it means: it used to be a projection; it means cashing its chips to trade in the future now. The decline of company matériel, skills and potential, the old valuation of the company, is hidden underground as long as something can be sold off or another acquisition can be stripped to the bone. 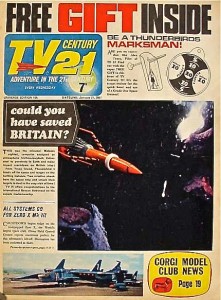 Why not? The country itself has been run on the same basis for a few decades: the manufacturing industry…craftsmen…public services…the land itself…sacrificed to the stock market to feed the speculators. And the proof of the system’s success is the man with the fat cigar, the role-model for the whole shebang, look at him: he’s making it big, so how can it fail? What built these resources in the first place is a question that never comes up: it’s irrelevant. Listen, as long as the national resources hold out, there’s always something to sell off to make the next dividend. Let’s not get bogged down in detail.

And after that? There’s always oil. The planet itself can be hollowed out and downsized like the surface of the moon. That’s one small step for man, one giant leap for the shareholders.

On downsized Tracy Island, in a bulimic economy of boom and bust, Tracy Senior’s empty despair echoes the demoralised ground-staff. “That is a very dangerous sign,” said a source close to the founder of International Rescue, for the record, “when people start ceasing to care.”[ii]

You could always complain. Press 1 if you are an existing customer. You have reached an Asian sweatshop phone network, orbiting the Earth. How can I help you.

By and by, as the short-term closes the odds on the long-term future, as investment plays fast and loose with the fate of children all over the world, there is nothing but nostalgia left standing. Rod Allen, an old-hand, shares a consoling bottle with Tracey Senior and quotes aloud his comments in Television Mail from better days. It’s on the record: look it up. Rod Allen remembers that this “is one of the happiest film studios I have ever come across from the staff point of view, that staff-turnover is relatively low, and that there is a great deal of promotion from within on the studio floor; first names are the rule all the way up and down the shop, and in an operation that depends to such an extent on team work, the team seems to be really united.”[iii]

Thoroughly overhauled now, the converse of those comments applies in every particular. As two THUNDERBIRDS are sold to fund more takeovers, pilots Alan and Gordon Tracey are fired and the rest take pay-cuts.

“I have the easiest job in the world,” Gerry Robinson boasts to the Tracys: “to come to you and demand money for shareholders, and when we have it to come back for more, again and again and again.”[iv]

And so Virgil arrives at a rescue zone with a view to cutting through reinforced steel in volcanic temperatures, only to find his torch and heat-suit sold off to launch a dawn raid on a hotel franchise. For the first time in its history, International Rescue must call the fire brigade.

International Rescue now needs a rescue package of its own.

Yet, as Robinson downsizes the countdown to 3 – 2 – 1, the media makes the man a business guru. Role-model! Sir Gerry Robinson is, in the end, consulted on how to improve the National Health Service in Britain. And I do mean the end.

Gary McMahon is the author of Camp in Literature

(2006, McFarland) and Kurt Vonnegut and the Centrifugal Force of Fate

Previous entry in the Ay Caramba! blog. Next entry.

[i] See Raymond Fitzwalter, The Dream that Died: the Rise & Fall of ITV.

[iii] Stephen La Rivière, Filmed in Supermarionation: a History of the Future.

One thought on “Thunderbirds Are Gone”