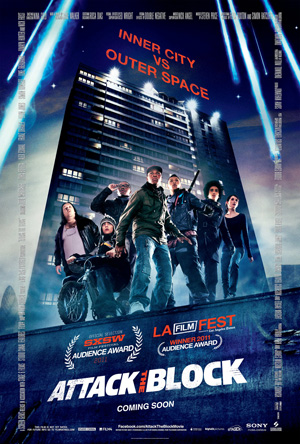 “This is too much madness to explain in one text,” one of five hoodlums turned heroes screams in Joe Cornish’s already-cult sci-fi film Attack the Block. The film won raves at South by Southwest, winning the Audience award, and was quickly picked up by Screen Gems for U.S. theatrical release. It certainly didn’t hurt to have filmmaker Edgar Wright as a producer. I can’t stop recommending this film to people. Cornish adds some terrific nods to horror masterworks like George A. Romero’s Dawn of the Dead, and John Carpenter’s The Thing, but he also peppers his film with elements common to 1980s camp like Critters and Night of the Comet. It’s an entertaining movie and Cornish obviously wants his audience to have fun watching it.

In a nutshell, Attack the Block is about a South London gang who have to fight off an alien invasion. Cornish wastes no time in getting the action started. Within the first five minutes, a group of five kids mug a young nurse (Jodie Whittaker) in the middle of a street. Just at the moment that the knife-point tension peaks, a massive fireball explodes from the sky and punches through a parked Volvo. The nurse runs away, and the leader of the group, Moses (John Boyega), investigates the car to find out what happened. He comes face to face with one of the aliens and, from there, the film becomes complete madness. (Don’t worry, I promise not to give anything else away.) 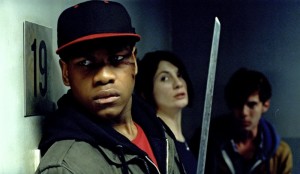 Since the film was made on such a small budget, Cornish takes on a less-is-more tactic, which adds to the feel of the film. Surprisingly, there is very little violence shown in the film, with the exception of a few rather graphic scenes. A lot of action takes place just off camera and all we can see are other characters’ reactions of the horrific things happening around them, or we can hear what is happening, like the growling of the creatures. Cornish and his cinematographer, Thomas Townend, play with a lot of carefully applied darkness and smoke. There are many scenes of characters peeking around corners or stranded in dark hallways, just waiting and listening for what will happen next. One scene involves the entire group of survivors blindly walking through a smoke-filled corridor, after one of the boys throws a firecracker down the hallway. It reminded me of scenes from movies where the protagonists are trying to find their way through the dark, knowing that at any moment something could jump out and grab them.

Attack the Block has it all: horror, sci-fi, comedy, and action. The characters are first class, and the lead teen actors have outstanding support from the likes of Nick Frost, Luke Treadaway, and a group of teenage girls who kick some serious alien ass. If this movie does not make it’s way to your city, be sure to grab the DVD (available just in time for Halloween).

And here’s what some Swedish reviewers had to say (in Swedish): DN, Smålandsposten, Kulturnytt (SR), Arbetaren Zenit.