Documenting Post-Millennial Teens: All This Panic 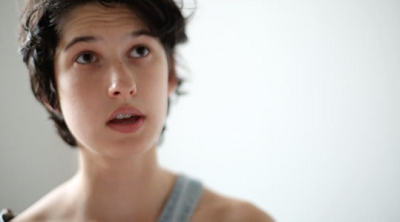 With an artful lens, All This Panic captures the awkward and fleeting stage of teenagers on the cusp of young adulthood. Over the course of three years, Brooklyn-based wife and husband art photographers, Jenny Gage and Tom Betterton, follow seven high school girls who attend the La Guardia High School for the Performing Arts. With fly on the wall camera-style, we see these teens during their leisure time: hanging out, putting on make-up, having parties, and confiding in each other about their likes and dislikes, love lives, and futures.

In contrast to the 2003 semi-autobiographical drama Thirteen (directed by Catherine Hardwicke and co-written by Nikki Reed), which first exposed the hidden life of pre-teen girls doing drugs, having sex, shoplifting, and behaving in out of control ways, this 2016 documentary is far tamer. While these urban girls also dabble in drugs and sexual encounters, as well as lying and stealing from their parents, they appear self-conscious of their actions, home lives, and friendships.

These post-millennials are almost too aware of themselves, and of the camera recording their lives. After all, they represent the new generation of teens who cannot imagine life without Instagrams and selfies. The title comes from an early episode when protagonists Delia and Dusty are looking at Instagram postings of what girls will be wearing the first day of classes. Delia is horrified and astonished by “all this panic.” This debut documentary manages to capture this brief period of adolescent anxiety marked by conflicting desires to stay young and grow up fast.

Lena M stands out as the main protagonist, as she reflects on the transformations in her teen life spanning high school through several years of college. We first meet her sporting braces and cropped hair as Lena explains to her high school friends that her parents had casually announced they are getting divorced. She spends subsequent years grappling with two acrimonious parents who both lose their jobs and apartments, as well as a mentally depressed younger brother.

Surprisingly, Lena navigates her family’s problems and earns a scholarship to attend Sarah Lawrence College. Not all the girls are as fortunate regarding their future after high school. Ginger, her best friend, didn’t do well enough in high school to go to college, despite the fact that she has an intact family life. Ginger ends up auditioning for potential acting jobs, while remaining in the throes of figuring out her life. 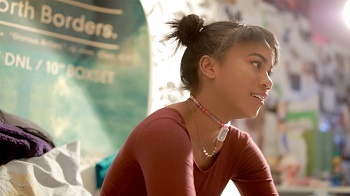 Another memorable protagonist is Sage, the only teen of color in the film. She apparently attends the same diverse high school as the other girls, though she’s not filmed interacting with them. Her strict, widowed mother from Jamaica has Sage running errands and doing chores in her free time. Sage is irritated but compliant. By the film’s end, Sage has won a scholarship to Howard University and thoughtfully reveals to the camera how excited she is to be going to an all-black college.

What sets All This Panic apart from other teen films is the intriguing cinematography. By using one hand-held camera with a shallow depth of field, DP Betterton has subjects perpetually going in and out of focus. This stylistic choice mirrors the inner life of these teens as they express both clarity and confusion in their coming into adulthood.

After cinéma vérité, its variants, fictional lookalikes, and reality television, All this Panic at first looks like faux vérité with its direct address to the camera and the extreme awareness of its protagonists. However, precisely because it captures how heavily these teens rely on their on-line lives, which can plunge them into panic or boost their confidence, All This Panic is potentially a new kind of “documentary.”

While giving discreet glimpses of these teens’ experiences and thoughts, All This Panic manages to go to the heart of a transitory time. With a unique poetical style, we witness again the resilience of youth as it struggles to grow up with dysfunctional families and equivocal landscapes.

Kate Hearst is working on a book, The Cinema of Barbara Kopple: American Activist. She earned her PhD and MFA in Film at Columbia University and has been teaching film history since 2011.