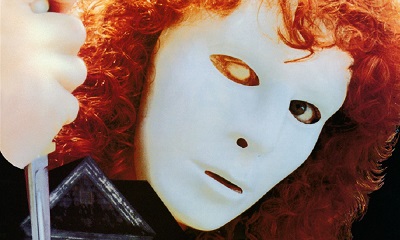 One month after releasing 1998’s Edge of the Axe on Blu-ray, Arrow Video returns to the José Ramón Larraz well with Deadly Manor, another of the late Spanish director’s three career-twilight reciprocations to the slasher trend. The 1990 film stakes another claim on his CV, being his final foray into horror.

Deadly Manor finds Larraz attempting to make something as commercially American as the Bob’s Big Boy statue being hauled in the opening scene. Out of the truck hops Jack (Clark Tufts, Voodoo), your basic brooding criminal on the lam. Soon he’s hitching a ride with three requisite college couples lost en route to their weekend wilderness getaway. Jack makes no effort to get to know them, and neither should viewers; as so many young actors before them, each represents a stereotype without fully embodying it: Preppy Hunk, Funny Fat Guy, Hot Blonde, Not-Quite-as-Hot Brunette and so on. So stock are these characters in such a stock situation, one of them actually says, “It’s getting dark, cold and it’s gonna rain.” 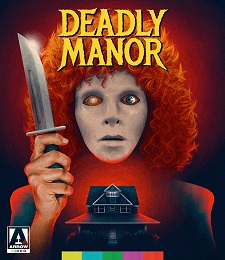 Arriving at the titular manse just in time, the group finds it supposedly abandoned, despite signs pointing otherwise; if it’s not yesterday’s newspaper, it’s the his-and-her coffins in the basement or the closet of jarred scalps. And, hey, what’s with the naked lady (Jennifer Delora of Frank Henenlotter’s Frankenhooker) who pops up wearing only a Phantom of the Opera-inspired face mask? Is she the same woman whose nude photos adorn nearly every wall of this abode? Is she a centerfold or succubus?

After such a protracted buildup, the answers arrive substandard – a remodeling nightmare in the final scene notwithstanding (and one spoiled in the disc’s trailer, so viewer beware). With each thunderclap, we increasingly gain evidence that Larraz is simply going through the motions and ticking boxes off his checklist as he goes; his lack of enthusiasm surrounding the material is infectious.

Only in a fairly explicit sex scene between the mystery woman and this film’s ersatz Johnny Depp (Greg Rhodes of Umberto Lenzi’s Ghosthouse) does Larraz seem engaged enough to weave his special spell of perversity: a swirl of eroticism and horror that’s tough to define, easy to detect and as proprietary as the Colonel’s blend of 11 herbs and spices. On the Blu-ray’s half-hour interview with Delora, the actress has nothing but pleasant memories and kind words for her director … and the polar opposite for Rhodes and his unprofessional antics during their simulated romp. She lays into him so hard, her words create sparks, of which Deadly Manor possesses a deficit.