Skip to content
Festival Reports
May 23, 2013
Posted by Film International

The 15th Udine Far East Film Festival opened on April 19 and ran through April 27, with a great lineup of films from East Asia. Located in a small town in Italy near the Austrian border, and simply known as the Udine Festival for short, the event consistently provides audiences the largest portal of films from East Asia found in Europe and typically screens entries from Japan, China, Hong Kong, Macau, Taiwan, Singapore, South Korea, Thailand, Indonesia, and the Philippines. Last year, a film from Mongolia was screened for the first time and this year marked the first screening from North Korea. Director Kim Gwang Hun and producer Ryom Mi Hwa traveled to the festival from Pyongyang, the capital city of the People’s Republic of Korea, to present their fairytale entitled Comrade Kim Goes Flying. Meanwhile, many of the other films come directly from premieres in their respective countries or make their international debut at Udine. 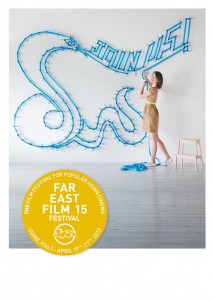 The Autumn 2012 edition of the highly regarded Oxford journal Screen wrote about the Udine recipe for success in “Counter Programming and the Udine Far East Film Festival.” The authors affirm Udine as a high quality festival that showcases the best of Asian cinema. The authors go on to claim that although a film from Asia might be presented at A-list festivals, such as Berlin, Cannes or Venice, it garners attention primarily because it comes from Asia, not because the film is popular and given critical attention in its own country. The article also emphasizes that vendors at A-list festival markets are not as informed about the DVDs or screeners shown in the Asian market as the Udine festival organizers.

Udine’s special talent, as noted in Screen, is selecting members for their programming committee that specialize in a particular country in East Asia. Udine selects its films after the South Korean Busan Festival in October, and in the interim between Cannes and Venice, through special contacts within their festival committee. This makes Udine a special niche market for new Asian films. Udine also has a partnership with the Venice Film Festival and the Busan Festival, which helps them with the depth of their film choices. However, many films screened at Udine have not been shown before on the festival circuit. Directors often come with their films to Udine, and in the past the festival has made the likes of John Woo, Johnnie To, Tsui Hark, Takashi Miike, and Takeshi Kitano known in Europe.

Each year there is a special retrospective of historical films, and for the 2013 lineup two classics of King Hu were screened – the martial arts masterpiece Touch of Zen (1971) , which heavily influenced the wuxia films of Ang Lee and Zhang Yimou, and Raining in the Mountain (1979). Udine audiences have become experts on Asian cinema and relish these old revivals, as well as a DVD and book market that feature the work of Asian auteurs from previous festival years. Overall, the festival catalog is an accomplished and prestigious document that scrutinizes the current Asian film market. In fact, Udine catalogs should be considered collector’s items, since they do not just catalog the films but audience tastes and trends as well.

One of the most anticipated films to screen this year was the European premiere of Ip Man: The Final Fight, which closely followed its theatrical release in Hong Kong on March 28. Set in postwar Hong Kong, the film follows the story of Wing Chun Grandmaster Ip Man, most famously known as the man who trained Bruce Lee, who is challenged by rival kung fu masters for the claim of martial arts greatness. Anthony Wong Chau-Sang plays Ip Man and the film is directed by Herman Yau, who also directed The Legend is Born: Ip Man (2010).

The 2013 festival year also showcased three world premieres from Japan: Maruyama, The Middle Schooler, directed by Kudo Kankuro; Angel Home, directed by Tsutsumi Yukihiko; and It’s Me, It’s Me directed by by Miki Satoshi, who visited the festival with the film’s super pop idol Kamenashi Kazuya, also known at Kame, a 27 year old dancer, singer, actor, television personality, and radio host. Other highlights included A Story of Yonosuke by Japanese director Okita Shuichi, who previously made the brilliant The Woodsman and the Rain (2011) about a film crew and young director who must ask a woodman to stop sawing down trees so they can finish their shoot; The Bullet Vanishes by Lo Chi-leung, a Chinese detective story set in the late nineteenth century featuring Lau Ching Wan and Nicholas Tse; the Hong Kong action film Cold War, directed by Longman Leung and Sunny Luk; and Lost In Thailand by actor/director Xu Zheng, which currently holds the box office record for mainland China.

As far as awards are concerned, the Golden Mulberry for Lifetime Achievement went to the South Korean director of the Busan Film Festival Kim Dong-ho. Kim distinguishes himself by running a festival known among many as the “Cannes of the East.” The audience award went to the South Korean comedy How To Use Guys With Secret Tips! by Lee Won-suk. The comedy is exceptionally clever, starring Lee Si-young in the lead who is an amateur boxer in real life. In the film, she is given a DVD by a streets salesman that will change her life and turn around her constant rejection in the job market.

The second place audience award was given to the Thai debut Countdown by Nattawut Poonpiriya. The film is set in New York, where three Thai flatmates piece together a phone number from different business cards and call Jesus—who turns out to be a Thai drug dealer. Coming in third place was Ip Man: The Final Fight, which was quite a feather in Udine’s cap, showing the film in Italy before any festival outside of Asia got the chance. Finally, the critics prize of the festival, known as the Dragon Award, and The Black Mulberry went to the Taiwanese drama Touch of the Light by Chang Jung-chi.

It is useful to point out that the films shown at the festival are incredibly popular in their own countries, commanding attention at the box office. The Udine audiences are seasoned veterans of Asian films, they come every year, and there is always an exciting atmosphere inside the packed theaters (especially since many directors and actors are in attendance from East Asia). Udine has therefore provided an excellent platform for cultural exchange between Europe and Asia. At Udine, Asian films are in a class as opposed to festivals that try to feature world cinema from every corner of the continent, without specialization. There are 48 Asian countries and it is the largest continent in the world. Udine concentrates on “Far East Asia,” hence the title of the festival, and this specialization gives merit to Udine’s grand event.

Moira Sullivan has covered the Far East Film Festival and the Venice Film Festival since 2004. She is a member of FIPRESCI with a doctorate in cinema studies from Stockholm University and graduate studies in film at San Francisco State University.