Beyond the Dream Life: Fantastic Planet on Criterion 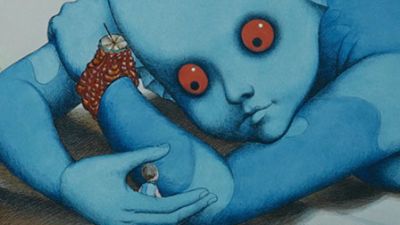 I can’t remember exactly how old I was when I first stumbled upon René Laloux’s surreal animated French language sci-fi film, Fantastic Planet (1973). I assume I was old enough to read subtitles, but I’m not 100% sure because the visuals are engaging and unusual enough to hold the attention of anyone, regardless of language comprehension. I believe it was broadcast on television in the mid 1980s, which means I would have been between 7 and 10 years of age. I must have been by myself because for years after, when I attempted to describe what I saw, I received only blank looks. After a while, I began to wonder if I had, in fact, dreamed it. The film certainly possesses a dreamlike quality. But sadly, my dreams are not quite so brilliant. Finally, in my early twenties, I stumbled upon a movie poster in an independent video store and my fuzzy memories were validated.

With the 2016 release of the Criterion edition, it’s clear that La Planète Sauvage (the original title) has staying power that reaches beyond the basement-dwelling 80s child demographic. After re-watching it, this is hardly surprising. The 1973 film is a piece of art that transcends time and space. The paper cutout animation brings Terry Gilliam’s Flying Circus segments to a new level, seamlessly blending moving pieces with the background to create a fluid visual. I’d call it a lost art; only graphic designer Roland Topor is peerless in his skill and vision. His images are mesmerizing and all encompassing. It’s a trip that you can take without the need for mind-altering drugs or a rocket ship. 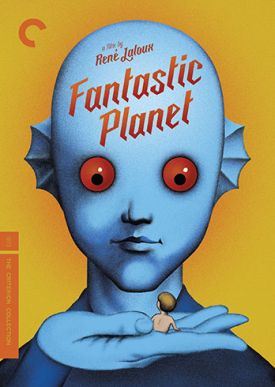 But pretty pictures aren’t much without substance and Laloux delivers here too. The story is set on a dystopian planet called Ygar, where the ruling species are the Draag – lithe humanoids with blue skin, red eyes, and fin-like ears. They reside in a state of peace and enlightenment thanks to regular transcendental meditation. There are humans on this planet as well, but to the Draag, they are tiny and vastly inferior. At best, the humans, known as Oms, are a curiosity to study or beloved household pets. At worst, they are pests to exterminate. Laloux and Topor based the script on the 1957 novel by Stefan Wul, Oms en Serie – Oms being a phonetic play on “hommes,” French for men.

The plot concerns one Om in particular, dubbed “Terr” by his Draag master, and adopted at infancy after thoughtless Draag children kill his mother. Terr’s master is a young girl called Tiwa, who dresses him in silly outfits and alternates between cuddling and tormenting him. She also keeps him with her during her lessons. This is the image that most resonated with me during my childhood viewing: Draag children learn through laurel wreath shaped headphones, which implant knowledge directly into their brains. Terr picks up some of these lessons too and gradually learns enough to understand both his plight as captive, and the mindset of his captors. One day, he seizes the opportunity to escape, taking the headset with him. He takes up with a group of “wild” Oms and soon the knowledge he has acquired catches like wildfire. Terr utilizes his skills to intercept a plan to eradicate the Oms, who have, according to the Draags, become overpopulated and outlived their usefulness. As a matter of survival, the Oms begin to stage an uprising, against seemingly insurmountable odds.

I would say, “They don’t make ‘em like this anymore,” but honestly, they never did. For the most part, Laloux and Topor drop us onto Ygar and leave us to fend for ourselves, much like the Draags did to the Oms. Exposition is kept to a minimum, doled out in fits and starts through what Tiwa, Terr, and the other Oms learn from the headset sessions. When the Oms venture beyond their prison walls to the wilds of Ygar, they are met with dangers they neither expect nor understand. They are but ants to nearly every creature they encounter, constantly evading (or succumbing to) death by all manner of carnivorous plant or animal. There is no telling how many generations of Oms have existed on the planet because they experience time differently – their entire lives are but a season to a Draag. 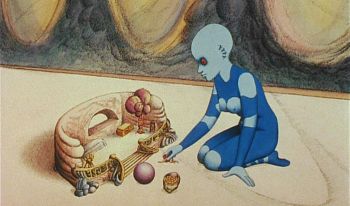 Ygar is more than just a well-realized and wholly alien land. Laloux’s film is rife with allegory, touching on such subjects as racism, animal rights, genocide, arms races, and colonization, as well as the much broader theme regarding what it means to be alive. The notion of good and evil doesn’t exist here. We spend as much time with the Draags as we do with the Oms, getting to know each species as sentient beings. Both creatures have an equal drive for prosperity.

Science fiction films often feel dated decades later, falling victim to the limitations of production in their era. But Laloux’s masterpiece is so otherworldly that it remains fresh and timeless. The DVD insert includes an essay by Michael Brooke, and asserts that at the time of its release, the film was meant as a direct allegory about the Soviet occupation of then Czechoslovakia. But it could also fit any number of genocidal besmirchments throughout history. When the Draags attempt to exterminate the Oms, they use gas pellets, large vacuums, and a sort of rolling flypaper. The human bodies pile up. (It gives one pause to hear a “superior race” talk about humans the way we speak of so-called lower life forms, debating whether or not learning and adaptation is indicative of intelligence or merely base survival instinct). Tiwa’s father alternates between sympathy for the Oms, as he attempts to teach her respect for life, and annoyance at the responsibility of caring for Terr as well as how it “distracts” her from her studies.This imagery stays with you. If nothing else, it will certainly make you think twice before stepping on an insect.

Alain Goraguer’s singular score is categorized as psychedelic jazz and has some recognizable funk tones. It’s a bit Bowie, a bit Gainsbourgh, with sinister flutes and the occasional human sigh. But for the most part, it transcends all known Earth music. The synth-heavy and discordant measures sound dangerous and utterly unpredictable.

The Criterion edition presents a new 2K digital restoration of the film, shown in its original 1.66:1 aspect ratio. The soundtrack has been remastered from the original 35 mm tracks. Special features include an alternate English-language soundtrack, two of Laloux’s early shorts – Les Temps Morts (1965) and Les Escargots (1966); a 2009 documentary on Laloux; an episode of the French TV show Italiques about Topor’s work; an interview with Topor from 1973 and the theatrical trailer. There is also a full color poster and the aforementioned Brooke essay, which also details the fascinating origins of the filmmakers, and the film’s place in the zeitgeist.

For over a decade, Jessica Baxter has provided her solicited opinion on films for the likes of Film Threat, ReelTime Blog, and Hammer to Nail. She is thrilled to continue her work with Film International, where she also serves as Image Editor for the journal. She also wrote and directed the award-winning short films, Snow Day, Bloody Snow Day (2005) and Love & 145 Watts (2004) and worked on two critically acclaimed music documentaries for King of Hearts Productions – Tad: Busted Circuits & Ringing Ears (2008) and Mudhoney: I’m Now (2012). She resides in Seattle, Washington, USA where she keeps and cares for two small humans.