Hard Truths: An Interview with Marcio Reolon and Filipe Matzembacher on Tinta Bruta 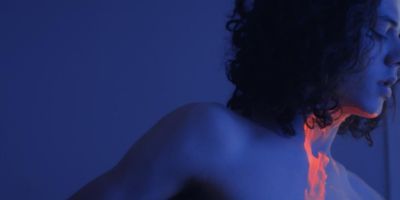 Shot in the southern Brazilian city Porto Alegre and directed by the duo Filipe Matzembacher and Mario Reolon, Tinta Bruta is a gentle portrait about Pedro, a young man who earns his living by performing on gay-oriented streaming platforms, and a city from which young people depart in waves. Uncomfortable in face-to-face social interaction and constantly bullied for his queerness, Pedro prefers transforming himself into his online persona NeonBoy in front of the webcam and sensually gliding his fingers across his naked body with neon paints, as his trademark performance. When his sister moves to the other side of the country and he encounters his copycat, he starts to take a different view on his body, on how he lives his life and how he interacts with the world. The film beautifully alternates between neon colors in night shots and grey tone during daytime, with electrifying performance from the leads. In the backdrop of an increasingly conservative society and tumultuous political situation in Brazil, Tinta Bruta is a timely dedication to the young queers in search of themselves and a better place to live. It won the Best Feature Film of the Teddy Award at the Berlinale 2018.

How did you start the Project and what attracted you to the story?

Mario Reolon (MR): The initial idea came from a short film directed by Filipe in 2013, called Empty Room (Quarto Vazio), about this character Pedro whose beloved sister moves away. From that film a bigger story was developed. We wanted to speak about the feelings of abandonment, which we feel in our hometown, Porto Alegre. I think a lot of people from medium-sized cities also feel the same. It seems that once people pass their adolescence, the city feels small to them, so they move into bigger cities or abroad. At the time when we were writing the script, among our ten closest friends, six or seven have left the city. We also wanted to talk about the virtual communication between people and the social network phenomenon. That’s how we came across this website where people could create their profiles and perform online in front of their webcam. Very often people create this idealized version of themselves virtually. That’s what our character Pedro does. He is a very shy, elusive guy, and has no friends, but when he goes online, he becomes this colorful, vibrant young man under the nickname “NeonBoy”, loved by people around the world.

Filipe Matzembacher (FM): We spent years writing this script. During the process we changed the film’s feelings too. In the beginning it was more about the idea of abandonment, and then we put more anger in it; anger with the society.

The setting of the film is where you both grew up and studied. The film also feels a bit like a love letter to the city. What do you think the space is doing to the character? 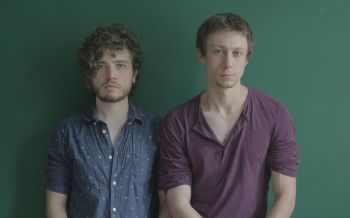 MR: We shot the film in Porto Alegre, which is the hometown where we were born and raised. It’s a city which we love and hate at the same time. For us the city itself is almost like a character in the film. It’s a hostile environment in some aspects, but it’s also a place where you can meet people and perhaps do something together in a collective way.

FM: We try to create the feelings of a conservative society in the film. For example, people stare at Pedro through the windows. It becomes the reason why Pedro prefers to stay in his own room rather than going outside.

MR: We really thought about bringing the city into the apartment and the bedroom, so the colors of his bedroom and apartment are the colors of the surrounding building, which you can see through Pedro’s windows. You can also hear sounds from outside such as cars’ noises all the time, so it feels like we are really sucked in into the city. Even though Pedro is trying hard to hide, he was still vulnerable there.

You mentioned Pedro’s anger. What do you think about that in terms of gender issues and sexuality in Brazil?

MR: Brazil is a very complicated country when it comes to LGBT rights or gender equality. Of course we deal with this feeling of anger every day. We feel fed up at some point and think that we have to react. This film to us is in a certain way a reaction. It’s an explosion of emotions that we feel at that time, and also a reaction to the political situation in the country. It’s especially about how the society is accepting violence against queers too easily, like the way Pedro is bullied, but then the society gets really frustrated and puts Pedro to trial when he reacts to the violence. The scene of Pedro being on trial is how things are in Brazil – queer people are put to trial on a daily basis, so it is not by accident that we start the films with a trial.

FM: There is this conservative and misogynist culture. Queer people are immediately put aside and marginalized.

YC: How did you meet Shico Menegat and Bruno Fernandes to play the roles of Pedro and Leo?

MR: Bruno is a stage actor in Porto Alegre and a part of a really great theater group. We saw him playing there and was really impressed by his performance and energy, so we knew that we really wanted to work with him. For Pedro, it was a longer search. For quite some time, we were searching for an actor with a fragile appearance, but also with intensity and aggression deep inside him. Someone that could make us believe that at certain moments, this person would commit a violent act. One day we were in a party and met Shico by chance, and thought that he has such qualities. Yet he has not acted before. For seven months we were rehearsing. Shico and Bruno really gave themselves in their performance.

Where did the idea of neon colors come from?

MR: Neon colors have several meanings for us. They represent something vibrant that Pedro would like to be but was not regarded by the society. Neon colors are also queer, something that stands out from the ordinary, but aggressive and hostile at the same time.

FM: These aspects are also included in our title. The idea of something solid (bruta) and the idea of something more liquid and shining like the paint (tinta).
YC: How did you get on with the research about the online community and the streaming culture?

MR: Definitely. Dancing is like a trauma to Pedro because it would expose himself. For a long time, I was terrified of dancing in public, so I could relate to that. When he is in his bedroom and with the help of neon paints and the nickname of NeonBoy, he feels that the viewers care about him and want to see him, which is different from the feelings that he has when he is outside with a crowd.

FM: For us the dancing part of the movie is very important. The important theme in the film is the body. We talked a lot about that in the shooting process. How do we shoot the body and how should the body be placed? Dance is actually the way you express yourself 100% just with the body language.

How was the process of working together?

MR: For us it is pretty natural. We have very similar backgrounds. We were both actors before becoming directors. We have similar tastes and interests in terms of what we want to explore in films. It’s easier for us and we complement each other. We do everything together. We don’t split the tasks at all, so we tend to do the entire process from writing to preparation, rehearsal, and then to the shooting all together.

FM: What is important for us is also to spend a lot of time during pre-production to talk about what the movie is. Once we decide this is the movie that we want to do, we go to the set with similar ideas of how to shoot and how the actors should act.

Berlin is the “elsewhere” in your film, where Bruno goes to study dance in the end. Now that you are in Berlin, how do you feel?

MR: That’s a really nice coincidence and we spoke a lot about this. We chose Berlin as Bruno’s destination because we did research on important cities in the world for dance studies. And, it would be a place which makes it difficult for Leo and Pedro to see each other again. It’s nice to be back in the Berlinale, where we premiered our first film Beira-Mar (2015) in the forum and we are very happy to be in Panorama this year.

Can you talk about your choice of the last song and the soundtrack?

FM: The soundtrack is very important to us. During the stage of writing, we were already choosing some music to work with the mood. Most of the songs have been decided before the shooting. Most of the artists are queer or work on themes related to queer. We like the idea of soundtrack having the feelings of melancholia, but at the same time something which we could use on a dance floor. Anohni’s Drone Bomb gave a lot of emotions to the final scene. When we were shooting Pedro dancing to these huge sound stereos, it was very emotional to everyone and Shico ended up crying after shooting.

Yun-hua Chen is an independent film scholar who contributes regularly to Film International, Exberliner, the website of Goethe Institut, as well as other academic journals. Her monograph on mosaic space and mosaic auteurs is funded by Geschwister Boehringer Ingelheim Stiftung für Geisteswissenschaften and was published by Neofelis Verlag in 2016.