Skip to content
Review
May 7, 2013
Posted by Jacob Mertens 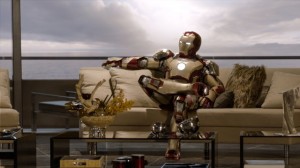 Many hinge the success and failure of a superhero film on whether villains can entice and excite the audience, or whether heroes can effectively transcend their humanity and conquer the odds. These are irrelevant concerns when placed next to the crucial component of all great action films: vulnerability. Without vulnerability, there can be no threat to the hero and no great stake in the action, and while many superhero films build in some kind of crutch to their protagonist, a lack of balance between action and threat often results from the need to construct a superior being. Take the iconic Superman, for example. The Kryptonian can be thrown through buildings, shot repeatedly, and he will always walk away unscathed. However, the minute Lex Luther drops by, adorned with a stylish chain of kryptonite, Superman devolves into an insufferable puddle of a man. The action must then take one extreme or the other: Superman is impervious or Superman is whiny little girl.

So, why take the time to examine the character of Superman in an Iron Man 3 review? Simple, the example better clarifies what director Shane Black does right with his iteration of the ‘invincible’ Iron Man. Iron Man 3 continues the saga of Tony Stark (Robert Downey Jr.), billionaire weapons manufacturer turned superhero philanthropist, who begins investigating the terrorist activities of the Mandarin (Ben Kingsley) after a friend nearly dies during one of his professed attacks. However, not all is as it seems in the film, and Stark must soon grapple with superhuman soldiers and the scientist-turned-psychopath Dr. Aldrich Killian (Guy Pearce) as well.

What pushes the film towards greatness, though it may never reach it, is the constant impermanence of Iron Man’s suit of armor. Throughout the film, Stark is constantly having to operate the suit while it malfunctions or is torn to pieces, and because of this he constantly puts himself at risk. In fact, one sequence finds Stark leaving his malfunctioning suit to recharge on a car’s battery, raiding a hardware store for supplies, and then using these domestic supplies to invent several modestly destructive weapons. He then mounts an assault on the Mandarin’s mansion cloaked only in a hoodie. The sequence works for two reasons, it reaffirms Stark as a brilliant scientific mind and it instills genuine concern for his safety. And frankly, when Stark kills a terrorist with a Christmas ornament that explodes into shrapnel, it just feels more satisfying.

The film also benefits from a strong script, which learns the lessons of past Marvel and DC machinations that overwhelmed the screen with too many villains. Instead, Iron Man 3 creates a fascinating turn in the second act that subverts audience expectations and refocuses all of Iron Man’s ire on Killian. While giving details would ruin the shift, I must at least say that comic book purists should be grateful that Black’s film can take chances with the source material and create something new and intriguing. As far as the rest of the film goes, Downey Jr.’s charismatic turn as the Iron Man continues to take advantage of sharply written dialogue, and the action agreeably builds to an inevitable climax with all the brilliant pomp of a comic book film. 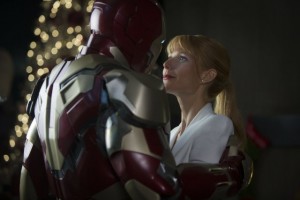 If Iron Man 3 has one aspect that holds it back from greatness, it is that the film does not effectively delve into Dr. Killian’s motives as a villain. True, all the groundwork has been laid: a cripple who now seeks the feeling of power and superiority that always eluded him, and so on. That said, Pierce’s character leaves the audience little to remember of him as a man, and so the villainous role feels shallow. Even so, Killian provides excellent fodder for Tony Stark’s maturation as a character, and it is Stark’s beating heart, still surrounded by shrapnel, that drives the film. Viewers who go to Iron Man 3 expecting the relentless barrage of The Avengers (2012) may walk away disappointed, but those who can appreciate the thin-skinned humanity of a superhero will find more than enough here to sate them.