A Book Review by Tony Williams.

“I hate Spielberg, because none of his movies are honest…He is fascist, because America is the centre of his world. If I can kill Spielberg, I will kill Spielberg…I think Spielberg is the son from whom Walt Disney fucked Minnie Mouse.” (1)

Despite denials to the contrary, the condemnation of post-1977 Hollywood due to dominance of the “Lucas-Spielberg syndrome” as defined by Robin Wood and Andrew Britton remains as true today as when they first diagnosed the disease. Mainstream film production now globally offers a mindless formalism and tedious uniformity that makes it difficult to convince people that things were very different decades ago, both in the commercial and independent sector. Thus it is pleasurable to see the production of a monograph devoted to a key film by one of the most iconoclastic directors of the late twentieth century who is still with us today and actively engaged in film making among his many other creative pursuits. Allesandra Santos’ The Holy Mountain (2017) is a recent addition to the Cultographies monograph series launched by Wallflower/Columbia University Press. As its name suggests, the series is devoted to films such as Deep Red, They Live, This is Spinal Tap, Bring Me the Head of Alfredo Garcia, Blade Runner, and Donnie Darko, all of which have different claims to this category. Apart from writing a blurb for D. Harlan Wilson’s They Live, I have had no further contact with this series until now, but I can definitely affirm that University of British Columbia, Vancouver Professor Allessandra Santos has written an equally informative contribution to this series that, hopefully, will not go the way of other monograph projects initiated by I.B. Tauris, Hong Kong University Press, and others. The BFI series is mixed dependent on who they allow into their hallowed realm to receive their equivalent of the “glittering prizes” akin to Royal recognition – “Arise, Sir Mick”! At least, the late John Lennon returned his award while the least should also be said of Sir Paul McCartney, co-composer of The Liverpool Oratorio. (2) 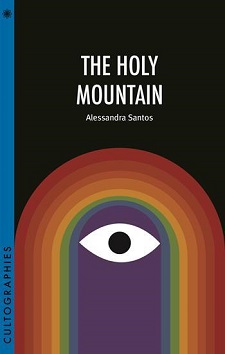 Containing text, notes, bibliography, and index, this 136-page monograph provides a concise introduction to one of the works of a challenging filmmaker who engages in provocative cinematic assault and battery on the jaded sensibilities of those who consume mainstream cinema like junk-food addicts as well as making much needed statements such as the one quoted above and whose recent work is significantly aided by today’s Kickstarter process. Those who have witnessed the documentary about his failed attempt to make Dune that resulted in that miserable 1984 version directed by David Lynch will understand how important this iconoclastic talent is to us today in our mediocre world of high concept, non-creative, big budget cinema. A monograph devoted to a film that should be constantly shown in any college class which claims to feature experimental and independent film is a necessity in an era now witnessing a twenty-first century version of Joseph Conrad’s “The Heart of Darkness” both culturally and historically.

Following an introduction, “`But is this life reality? No, it’s a film: The Holy Mountain and Me” in which Santos provides a revealing and welcome prologue concerning her changing personal perspective to the film is one of those rare instances of critical interaction with a text on all levels. Her four main chapters outline her own personal journey towards enlightenment, one less dangerous than that facing the various pilgrim’s in a director’s version of a 60s countercultural Pilgrim’s Progress. They are “Enlightenment for Sale: Production, Promotion, Initial Reception”; “The Secret of Immortality: Afterlife”; “Sacred Excrement: Reading The Holy Mountain”; and “`Real Life Awaits Us’: Placing The Holy Mountain.” All these contain concise critical perspectives involving key factors of production, distribution, historical contextualization, differing modes of temporal reception, and the diverse nature of interpreting a film that lends itself to so many meanings in past, present, and future aspects. Overall, this is a very good introductory guide to approaching a complex film whose type is, aside from Jodorowsky’s recent work, now virtually unknown today.

The first chapter explores the diverse theatrical techniques employed by Jodorowsky on his actors very much aligned with those of Antonin Artaud later adapted by Jerzi Grotowski as well as Zen practices utilized throughout the filming (28-29). The second chapter involves the film’s relationship to the contemporary counterculture and how it was taken up by succeeding avant-garde movements in different ways despite official institutional miscomprehension (46-47). Coverage of Jodorowsky, both from the time of the film’s appearance until today, also receives a good critical survey while the third chapter is a deep critical examination of the text showing how the film “transposes stage and street theatre techniques to the silver screen” (67) also noticing its satirical perspective (75-77, 82-83) that operates in many diverse ways. Jodorowsky is certainly aware of Mexico’s dark history such as the contemporary massacre of student demonstrators referred to in the film and the complicity of America in this process (87-89), aspects of which he treats in his ruthless surrealistic manner. Each time I visit my local supermarket seeing miniature trolleys for “trainee customers,” Jodorowsky’s relevance remains in his caustic view of the indoctrination of the young into consumer culture, critique of the arms industry, and the commodification of the counterculture in the Sel sequence (92-93).

The presence of Santa Claus further associates the commercialism of Christmas with the market geared towards consumption. When combined with the ideological component, this is a humorous but powerful critique of the networks of indoctrination involved in the war industry. (93)

No wonder the director hates Spielberg, whom he sees as Disney’s heir, Uncle Walt being a “monster” and “perverter of children.” (95) (3)

Another relevant aspect noted by Santos is the real estate development in the Lut segment:

The oppression of physical structures and everyday life politics and the disdain for the marginalized are succinctly and hilariously presented. The Holy Mountain offers a constant reflection of how capitalism emphasizes individualism over collectivism and how collectivism is presented as a tool of control. (95)

The film’s climax is often regarded as controversial especially by the actors who participated in it but Santos sees its Brechtian background and this may also be related to the Buddhist tradition. Did not Gautama once tell his followers that he could not lead them to enlightenment but only show them a direction that they had to follow themselves? So did Dziga Vertov in his provocative Kino-Eye period when cinematic experimentation was still allowed in Russia. Likewise, Jodorowsky provides his own version of “Kino Shock” in a different cultural and historical era. The film also has connections with Debord’s The Society of the Spectacle (1973) and Santos sees the film as “firmly situated in the early 1970s global context of the Cold War, of an international war in Vietnam, and of the countercultural movement” (106). Although one could associate The Holy Mountain with films described as “the ultimate trip,” such as Kubrick’s 2001: A Space Odyssey (1968, as MGM’s revamped 1969 ad campaign stated), Cammell and Roeg’s Performance (1968), Roger Corman’s The Trip (1967) or Dennis Hopper’s The Last Movie (1971), The Holy Mountain has a much more serious mission and cannot be dismissed as an indulgent product of a director basking in the countercultural glory of El Topo (1970). (4)

Although rooted in a particular historical era, the film really offers a model that future generations can take, adapt, or reject in terms of confronting the new situations of their own eras by attempting to follow diverse paths towards enlightenment, whether cultural, historical, personal, or political in terms of whatever opposes the status quo, whether it be in cinema, culture, or society. Despite the fact that the film has become a cult object and Jodorowsky himself regarded as a guru (108), this may also represent one of the insidious ways co-optation operates in society to “inoculate” any type of alternative that threatens the status quo, as Roland Barthes stated in Mythologies (1957), a work that also became absorbed into bourgeois culture. Yet in the case of The Holy Mountain and the director’s other work, this has occurred with “The Singer, not the Song” – to refer to that other 1961 film directed by Roy Baker starring Dirk Bogarde that later became a cult object in its own way. By contrast, the artistic experimentation and final message of The Holy Mountain remains immune to such appropriation. The role of character assassination has long remained a dubious tactic to undermine the radical nature of any work and alternative forms of political expression or dissent that attracts the undermining attention of internet trolls, and this ultimately is little better than an irritating distraction. As Santos states in her concluding sentence, “The real message of The Holy Mountain is a call to action to live in love and to change the world in doing so” (114) – a message more relevant today than it was at the time of the film’s production.

Tony Williams is Professor and Film Studies in the Department of English, Southern Illinois University at Carbondale, an institution threatened with the abolition of all departments by a new Chancellor and the imposition of new Schools of Public Safety (aka Police Academy) and Homeland Security. He is also Contributing Editor to Film international and takes the message of The Holy Mountain very seriously.

One thought on “Viva Jodorowsky!: The Holy Mountain by Allesandra Santos”