Oz the Great and Powerful 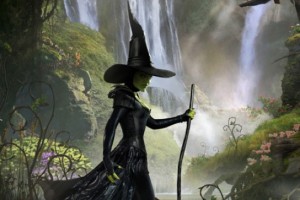 Several films have attempted to revisit Frank L. Baum’s magical land of Oz, since Judy Garland first walked the yellow brick road over seventy years ago. So, considering such efforts as the dubious Michael Jackson / Diana Ross vehicle The Wiz (1978) and a Muppet television version in 2005, you could be forgiven for believing that any normal filmmaker concerned with his reputation would think twice before attempting a project involving Baum’s iconic creations. However, Sam Raimi the director of Oz the Great and Powerful (2013), is no normal filmmaker, and his film starring James Franco, Mila Kunis, Rachel Weisz, Michelle Williams and Zach Braff, is not an attempt to rework or re-imagine the MGM classic, but rather pay homage to it whilst bringing a new dimension to the legend.

Long before Dorothy was whisked from Kansas to the magical land of Oz, a conman named Oscar (Franco) finds himself transported to the same kingdom and into a battle between three witches, Glinda (Williams), Theodora (Kunis) and Evanora (Weisz). With the help of a talking monkey called Finley (voiced by Braff), and a tiny girl made from china (voiced by Joey King), can Oscar alter the fate of the citizens of Oz and in the process discover the man he was truly destined to be?

When you consider MGM’s masterpiece The Wizard of Oz (1939), the film which set the benchmark by which all celluloid fantasy has been judged since, it is likely that the names of the stars in front of the camera are those which immediately spring to mind. Though countless technical artists including director Victor Fleming (along with several other uncredited directors), legendary costume designer Adrian and revered art director Cedric Gibbons left their indelible mark on the film, it is its stars Judy Garland, Frank Morgan, Billie Burke and Margaret Hamilton, that the public remembers.

Strange then that, having watched Oz the Great and Powerful, it is the indelible mark of its director Raimi which permeates every aspect of the film. Raimi is the perfect example of the Hollywood dream – proof that imagination, determination and genuine talent can still count in a business that largely relies on who you know not what you know. He has come a long way since he wrote and directed the cult horror The Evil Dead (1981), and the influences of his largely fantasy-based film repertoire are clearly felt in his latest production. His experience in the genre did not however make it any easier for him to tackle a film based on a subject matter held in such high esteem by so many film lovers. Raimi has admitted himself that it took him some time to agree to make what he refers to as his ‘love poem’ to the 1939 favorite. 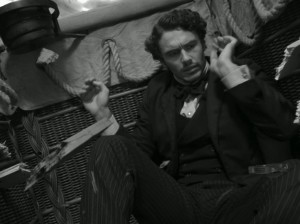 His respect is clear in the subtle references that pepper the new story, yet never to the extent that you feel he is mocking the earlier film. Part of the fun is watching out for these nods, as in the change from the black and white opening scenes to those in glorious neon when Oscar lands in Oz, or when the witch Evanora stands in the tower of her castle exhorting her army of winged baboons to “fly, fly, fly” on a deadly mission against her foes. 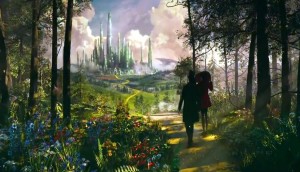 Occasionally the film is in danger of becoming unhinged due to an overt ‘fakeness’ that intermittently threatens to overwhelm proceedings. However, as with the MGM movie, it is its air of surrealism that adds a sense of magical believability to Oz – the land is after all intended to be bizarre and beyond our imagination. This is also overcome with the potentially hazardous use of 3D, a process which is now in danger of dulling its impact through overfamiliarity in modern, family-friendly extravaganzas. Here Raimi has used it as a tool to bring depth to the land of Oz as opposed to simply making things jump from the screen for shock effect, adding a new aspect to an environment which could otherwise have appeared overtly plastic.

Though the cast are without doubt marvelous, it is a point in the film’s favor that no one individual appears stronger in detriment to the others. Franco, Weisz, and Williams are all suitably convincing in their individual roles, whilst Braff provides the obligatory comic relief in Finley, and Kunis is genuinely unsettling as Theodora. It is undoubtedly, however, as Raimi is quoted as saying, the land of Oz which is the film’s real star, giving Oz the Great and Powerful a timelessness and magic all of its own.