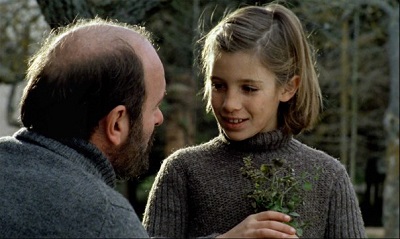 Writer-director Víctor Erice can be forgiven if he speaks of El Sur (newly released by the Criterion Collection) with more than a tinge of regret. This 1983 feature, only his second from 1973 to today (his sparse filmography largely consists of shorts and documentaries), wasn’t just released in a form contrary to what he envisioned, but he was never actually able to complete the film as originally intended. With some thirty-odd days left of shooting, and essentially a whole second half of the story to be told, production was shut down. Producer Elías Querejeta deemed the picture to that point satisfactory and entered Erice’s sophomore effort in the Cannes Film Festival. A staggered global release followed, where El Sur, despite this slapdash process, gradually established itself as one of the greatest Spanish films ever made.

Based on a 47-page short story by Adelaida García Morales, El Sur begins in the autumn of 1957. In a room elegantly struck by increasing early morning light, the camera holds on the face of 15-year-old Estrella (Icíar Bollaín) as she lies in her bed. The footsteps of her frantic mother, Julia (Lola Cardona), are heard scrambling about the house. The family dog barks persistently. Estrella’s father, it seems, is nowhere to be found. This isn’t the first time Agustín Arenas (Omero Antonutti) has abruptly left the house, but when Estrella discovers his prized pendulum under her pillow, the girl rightly surmises that it will be the last. Flashing back about seven years, the voiceover of adult Estrella (María Massip) notes that her family had frequently moved around so Agustín could find work, but aside from being a loosely stated doctor, the exact nature of that profession is left indefinite. Agustín apparently conducts “experiments” in the locked attic of their rustic home, a remote county residence in the north of Spain dubbed “The Seagul” for its garnishing weather vane. But that chatter may just be a mother’s exaggeration, a reason to keep the now eight-year-old Estrella (Sonsoles Aranguren) quietly placated and in her place. 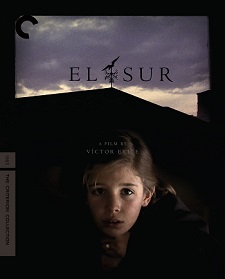 To the curious child, who firmly believes her father has some sort of magical prowess, all she sees is the way people call on him as an accomplished water diviner, employing his mystical pendulum in the process; what others view as his supposed miracles, she perceives to be perfectly natural. Much else is left unknown in El Sur, or at the very least, partly implied. Why, for instance, does Agustín so regularly set off on his own? And what happened when he was a young man in the south? What political rift permanently disconnected him from his father following the Spanish Civil War? The ambiguity of Agustín, so perplexing for young Estrella and so fascinating for the viewer of El Sur, is in no small part encouraged by the enigmatic performance of Antonutti. The Italian actor barely spoke Spanish and was given relatively little to say, but his resulting demeanor – gentle, cautious, thoughtful – speaks volumes and yet reveals so little. There is clearly something unsettled in his past, and his current state is likewise far from content. The mysteries of his actions are readily acknowledged by his family and the mysteries of El Sur itself linger to the end.

Enhancing this uncertainty is the fact that so much of what flows into El Sur is effectively the remembrance of pre-teen Estrella, who openly admits the impracticality of her recollections; her first memory, she says, is an image she made up, of her father bending over her pregnant mother predicting (correctly) the sex of their child, also using his pendulum. The whole of the film balances on the precipice of emphatic invention, from obvious sequences of fantasy to the way even more practical scenes are lit and composed. And some of what is seen would have been impossible for Estrella to have witnessed anyway, so the vantage point of the film is repeatedly detached from its ostensible guide. Be they moments of concrete reality, though, or those of evident reverie, Erice engenders a delicate depiction of this father and daughter, kindred spirits dancing together after her first communion, an intimate reprieve from an event neither appeared too thrilled about, or taking a spin on his derelict motorcycle, as she prods Agustín to go faster and faster. And when Estrella protests the “unpleasant atmosphere” of their home and hides under her bed, prepared to never come out again, the willful seclusion recalls her father’s own penchant for solitary escapism. Given its subjective nature, the perception of this coming-of-age advancement, and how it parallels the unstated internal troubles of Agustín, is bound to be skewed. But in tandem with Antonutti, the conviction of young Aranguren imparts substantial authenticity. Somewhat older than her former schoolmate Ana Torrent, the wide-eyed child star of Erice’s The Spirit of the Beehive (1973), Aranguren is more overtly expressive than her predecessor, whose talent had rested in her awestruck reserve. Aranguren, on the other hand, is animated and impulsive, and while Bollaín does a fine job as the teen Estrella, coming back in with just under a half-hour to go in the film, the change in temperament is notably pallid by comparison.

Incidents in El Sur occur in an unprocessed stream of episodes, with no inflated sense of pivotal transition. At one point, Doña Rosario (Germaine Montero), Agustin’s ailing mother, and Milagros (Rafaela Aparicio), the family caregiver, arrive for Estrella’s first communion, but more important than their presence as such, their appearance serves to shed still muted light on whatever it was that drove mild mannered Agustín away from his home. Hinting at the political root of his departure, and of El Sur generally, Milagros pragmatically observes that “good guys” and “bad guys” are just “words and more words,” their definitions dependent on whoever is winning. The one key revelation in the film, at least for Estrella, is when she discovers her father’s fondness for another woman, an actress he had once known. But to what extent that figures into her father’s crisis, which steadily and pensively progresses to an inauspicious conclusion, is hard to ascertain; he is clearly haunted by this lost love, but one also senses a more obscure torment. Partly the result of El Sur’s mid-production stoppage, there is no grand finale in the picture, and the end that is there was added only after the rest of the film had wrapped. The final, tantalizing inclusion is a long-distance phone call Agustín makes to the south the night before tragedy strikes. Speculation about who he called is left open-ended, but the possibilities are intriguing either way.

Erice had proven himself to be of tremendous visual discernment with The Spirit of the Beehive, but El Sur takes the pleasingly controlled form of that film to another level of vivid fertility. With cinematographer José Luis Alcaine, a prolific cameraman who has more recently done excellent work with Pedro Almodóvar, Erice casts scenes in methodically permeating shafts of light, infusing the picture with painterly illumination and an evocative atmosphere where each frame soaks up the climate, the seasonal shifts in radiance and texture (Alcaine likens the photography to something by Griffith, Sternberg, or Murnau, and argues that the latter half of the picture, in the south, would have had a less gloomy ambiance). Among the supplements on the Criterion Collection Blu-ray of El Sur is an episode of ¡Qué grande es el cine! from 1996, featuring film critics Miguel Marías (who claims to have seen El Sur 14 times), Miguel Rubio, and Juan Cobos. Host José Luis Garci declares El Sur to have the “most beautiful light in Spanish cinema,” while similar sentiments are echoed by his guests: Rubio says the film “burns with its own special glow” and speaks of Erice’s “enchantment of images,” while Cobos contends Erice “films the air itself.” Even if there weren’t a good deal more to admire about El Sur, the sensual, tactile imagery of the film, especially in this 2K digital restoration, would be enough to warrant attention and appreciation.

In addition to an essay by novelist and critic Elvira Lindo and a new edition of the 1985 García Morales novella, the Criterion disc also features a 2003 interview with Erice and a 2012 program on the making of El Sur with Antonutti, Aranguren, Bollaín, Alcaine, and camera operator Alfredo Mayo. The recurring topic of discussion is, not surprisingly, the incomplete state of the picture. But while the complement of Estrella’s trip to the south would have been favorable (she discovers a long-lost step-brother and embarks on a sort of reconciliation with her father’s cryptic past), as it is now, with the symbolic homecoming left unseen, the suggestion is subsequently more provocative and works just as well, even it isn’t exactly what Erice wanted. He once told Geoff Andrew, “many critics applauded the fact that the south…was never actually seen. My taste’s a little more commonplace: I wanted to show it….It was a metaphor for the divisions that became apparent in the Civil War and also for the divisions in an individual who can’t reconcile two aspects of his own being.” Although the final few pages of the novella detail how the film could have ended, that printed rendering pales next to what could have likely been Erice’s interpretation. El Sur is commonly compared to other incomplete masterworks like Stroheim’s Greed (1925) or Peckinpah’s Major Dundee (1965), but more than these earlier instances of imperfect accomplishment, had one never known of its narrative deficit, there would be no indication to say otherwise. Consequently, though it’s instructive to be aware of how El Sur’s production played out, it’s equally beneficial to not let that insight influence one’s assessment of the final film. Whatever may have happened – a lack of funding, a change of management, or what Alcaine says was a “personality clash” with Querejeta – the end result is gorgeous, touching, and entirely satisfying.

Beyond the Surface: Cinema’s Baroque Flesh by Saige Walton