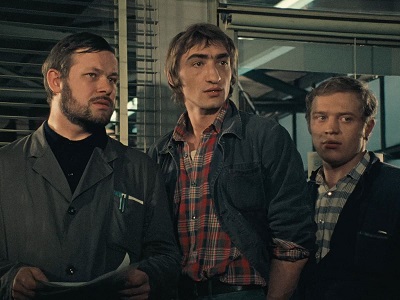 In her essay for the Criterion Collection release of Eight Hours Don’t Make a Day, Moira Weigel opens with a roll call of the assorted characters who have appeared in the films of Rainer Werner Fassbinder:

There is the cruel friend from Berlin Alexanderplatz, carrying himself like a German Mick Jagger, all lankness and swagger until he breaks a smile, and then he smiles fast. There is Maria Braun, slapping a vending machine. There is Ali, across a factory floor, polishing something; there is the Merchant of Four Seasons, and there is his wife, typing with only slightly more haughtiness, and less repressed rage, than she did in The Bitter Tears of Petra von Kant.

Weigel then cites philosopher Stanley Cavell, who wrote, “Not to remember the name of a traditional Hollywood bit player is possible. Not to remember their faces and temperaments is unthinkable.” This same sentiment, she adds, could be easily applied to the “loyal troupe of performers that director Rainer Werner Fassbinder assembled.”

It’s true. Aside from the formal variance of Fassbinder’s eclectic, abbreviated filmography, and the acute, sometimes disconcerting insights gleaned from his sundry stories and situations, the characters who populate a Fassbinder film – the primary players as well as those who function in a more peripheral, nonetheless noteworthy role – are routinely idiosyncratic, dysfunctional, and they nearly always evoke some deep-seeded representation of the complex human psyche. They don’t have to say or do much, though many do. Existing on screen is enough to make an impression. In Eight Hours Don’t Make a Day (which I reviewed for the recent theatrical restoration), Fassbinder convenes one of his largest casts of uniquely functional, distinctly representative types; the characters are relatable, genuine, and, at the same time, signify a particular behavioral or cultural category. There is, most prominently, grandmother Oma and her newfound “lover” Gregor; her daughter Kathe and Kathe’s husband Wolf; their children Jochen and Monika; Jochen’s girlfriend, Marion; Monika’s husband, Harald; and their young daughter, Sylvia. And among those in these and other parts are a directory of recognizable Fassbinder faces, including Luise Ullrich, Gottfried John, Kurt Raab, Hans Hirschmüller, Irm Hermann, Margit Carstensen, Brigitte Mira, and Ulli Lommel. 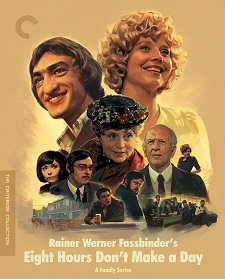 Broadcast in five episodes, from Oct. 29, 1972 through March of 1973, this Westdeutscher Rundfunk miniseries, branded “A Family Series,” is a multifaceted chronicle taking place over a combined 495 minutes. Ensuing drama impacts the film’s central family unit alongside a sizable sampling of their secondary associates, mainly coworkers who overlap with the ancestral cluster. Encompassing all ages, from the youngest of children to the oldest of its senior members, this ample assembly partakes in a regular succession of amusements and arguments, everyday occurrences that are variously negligible or significant, typically resulting in allied involvement either way, bonding fellow characters and the engaged audience. While the recreational times are associated with celebrations and alcohol-fueled socializing, the quarrels are born from contentions between those rare few who are conniving and patently cruel and those who are incessantly and enthusiastically amiable. Such blanket vehemence is infrequent, though, for what contributes to the accessible appeal of Eight Hours Don’t Make a Day are the common quibbles of having to share a bathroom, of arriving for a meal on time and staying for its duration, of contending with irate in-laws, and of balancing responsibility with inevitable adaptation, as when Jochen discovers Marion has a kid brother and must accept the fact and adjust his life – and their love life – accordingly.

Innate prejudices arise, primarily based on class or moral fitness, but these are contrasted with the hearty progressive process of forgiving and excusing, making jokes about the more trivial hostilities, and mocking, subsequently diminishing, moments of mounting tension. Adept at lessening pressure through her properly proportionate response (or lack of), Oma is especially good at this, aided by the confidence and perspective of her age. Save for the relatively limited incidents of profound discrepancy (the vicious build up to Monika and Harald’s divorce), these trifling tiffs otherwise leave no lasting memory, at least not for those involved – they have quite the opposite effect on the viewer. Issues arise, are easily forgotten, and life goes on, but in his extended portrayal of an unremarkable blue-collar livelihood, Fassbinder allocates concern within an appropriately regulated context, and emboldens significance no matter the banality of a given situation.

The development of Eight Hours’ diverse types, and their essentially positive relationships, do stand out from some of the more acerbic interactions seen in Fassbinder’s filmography. It’s not quite the case, however, as Jane Shattuc contends in an interview on the Criterion disc, that the prolific writer-director is now being exceptionally kind to his characters. While there are undoubtedly those in his films who are malicious and bitter and disturbed in one way or another, that plainly negative perception is generally realized through other characters interacting with said antagonist or by the viewer’s channeled opinion of his or her behavior. Seldom does Fassbinder’s literal treatment of a character encourage an unambiguously uncaring assessment. If anything, his recurrent depiction of troubled and troubling individuals seems to advocate a meaningful fascination or empathy with their controversial disposition. Nevertheless, there are not many such examples in Eight Hours Don’t Make a Day anyway. Irmgard’s derisive contempt for a mere worker is ultimately assuaged, and the ire raised when Jochen’s handiwork results in the revocation of economic windfalls is summarily tempered; only Harald is unfailingly meanspirited and even he acquiesces in the end. The pettiness of Jochen’s coworkers, a grouping with joys and tensions analogous to that of his family, is directed toward the new foreman, but that only occurs because of unfulfilled individual betterment, and eventually, they too surpass preconceived judgments of professional hierarchy, achieving a kind rapport and affirming the non-judgmental slant seen frequently in Fassbinder’s work. 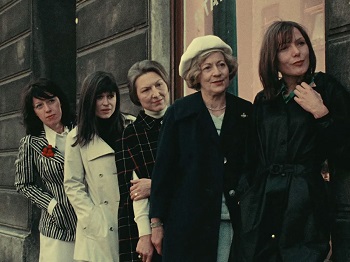 Shattuc also discusses the prominence of television in German culture and in the artistic foundation of the New German Cinema. Unique to Eight Hours Don’t Make a Day, as she observes, is its representation of the working class. This includes outwardly cold workplace anxieties, like the pressures of sustaining production quotas and the unification of labor, topics apparently slated for more divisive development in the series’ unrealized latter episodes (the program was abruptly cancelled before Fassbinder could continue). But it also includes the sequences away from work, the scenes that charm the universal heart of the picture. Early in the film, Jochen draws up a new tool, a bending mechanism to aid in the production at his factory. His best friend, Manfred, decries the extra effort, almost imperceptibly underlining the theme of the picture: “I amuse myself with them eight hours a day. That’s more than enough.” For all of its emphasis on Jochen’s career, and that material is arguably the more politically prescient, the enduring potency of Eight Hours lays elsewhere. Time has worn on these workplace sequences and their occupational objectives, objectives that were dismissed by some at the time as “utopian” but now appear rather conservative. The main thing, as implied but the film’s title and in Manfred’s throwaway musing, is that those eight hours at work aren’t nearly as consequential as what’s on either side of them.

The finest flashes of life in Eight Hours Don’t Make a Day are the touching instances of understated contact, fulfilled by Fassbinder’s perceptive direction. The initial courtship between Jochen and Marion, for example, their idle chit-chat, their talking in circles, their juggling of meaningless snags (pickles stuck a vending machine) and awkward assumptions (she’s getting pickles, she must be pregnant) are paralleled in the seasoned engagement of laugh-out-loud Oma and Gregor, who bear no affectation because experience has provided them with the foresight of maturity and an honest, unabashed spirit. These are, in other words, regular people, enhanced by naturalistic appearances and performances. As Shattuc also points out, though, Fassbinder’s use of swish pans and zooms strike a decidedly melodramatic visual chord, which carries over to the limited instances of melodramatic action: In perhaps the most quixotically romantic moment in the film, Jochen and Marion stop traffic to kiss in the street and casually brush off the correction of a passing police office. Contained within the stages of happiness and sadness, the fluctuating degrees of contentment and resentment, there is crude lunchtime banter, blatant racism, drunken ramblings, and instances of, in Weigel’s word, “absurdity,” like when a recent widower discloses his enthusiastic desire to raise chickens, or when Oma places a classified ad for a substitute grandma, hoping to appease Wolf who, now that she has moved out, has no one to bicker with. In much of this, one can’t ignore Fassbinder’s underappreciated comic timing, particularly his editing cues, arranged on precise beats of dialogue delivery, and his integration of music and camera movement to underscore a punchline.

With a fortunate roster of gifted actors, practiced at handling anything he threw at them, Fassbinder had the luxury of time to develop Eight Hours Don’t Make a Day, cultivating the spaces in which his performers reside. The interiors of this series display with informal efficiency the lived-in details of a rich domestic tapestry, steadily acquainting these packed homes in packed frames, in compositions that are abundant and whole. And as usual in any discussion of Fassbinder (for good reason), Weigel notes the obvious Douglas Sirk influence. “Mirrors and gauze and flowers fragment and obstruct our view,” she writes, “our heroes appear behind looming roses, yellow bells, and carnations, in rooms with patterned wallpaper and chintzy oil paintings and the occasional piece of taxidermy.” Working with longtime cinematographer Dietrich Lohmann, Fassbinder presents a vivid, fulsome environment, and while there is some geographic uncertainty concerning where these places are in relation to each other, with few scenes of characters going from place to place (Jochen is at one point positioned against Cologne’s colorless industrialization), most simply arrive and settle in, where the compelling ensemble is served multiple meals and multiple rounds of beer, their sweaty faces often suggesting too much of each. When Eight Hours reaches the after-party following Jochen and Marion’s wedding, Fassbinder distributes characters into rooms of isolated exchange, with each shifting layout revealing supplemental traits in the privacy of intimate interaction. Although, as Shattuc observes, these arrangements can become “claustrophobic,” they are also welcoming, warm, and increasingly familiar.

In Eight Hours Don’t Make a Day: A Series Becomes a Family Reunion, Juliane Lorenz’s 2017 documentary included on the Criterion disc, Hanna Schygulla speaks of her and Fassbinder’s generation, and their collective questioning of pre-war values and social norms. In that same program, Hans Hirschmüller states his belief, at least when the series aired, that a program like Eight Hours Don’t Make a Day could affect actual change with its sociopolitical content, encouraging cultural solidarity and the strength of pervasive unity. Whether this radical approach was or remains effective is up for debate: Is it idealistic or simply naïve? Is it antiquated or is there still a contemporary relevance? Whatever the case, Fassbinder presents a cause worth rallying behind. Clearing the divisions of a bland, bourgeois establishment, he opens us up to a comforting and commendable circle of friends and family, embodied by the young director’s own filmmaking cadre. It is a stirring and sensitive film, lacking much of Fassbinder’s erstwhile cynicism and acidity. Particularly in the actions of Oma and Jochen, who exemplify the ability to rise above society’s injustices, Eight Hours Don’t Make a Day is reassuring and optimistic, believing, as these characters do, that the world is one that can be changed, from challenging exorbitant tram fares and wage inequity, to getting neighborhood children off the streets and into a kindergarten. It’s not simply a world that is and must continue as is. There are enough hours in the day to make a difference.