The Real Bad Santas: Monstrous St. Nicks from Around the Globe

When we hear “Christmas films” we usually think of family-themed movies, comedies or even rom-coms, but the last thing that comes in mind is horror. Many horror films are based on holiday themes to attract audience members that are cranky about this jolly season. Black Christmas (1974 and 2006), Gremlins (1984), Silent Night, Deadly Night (1984) and the recent film Krampus (2015) channel the joys of Christmas to redirect them to feelings of terror. Some horror films from around the globe go one step further and use the archetypal form of Santa Claus – aka Saint Nicholas, Saint Nick, Father Christmas, and Kris Kringle – as a representation of evil.

This film, a loose remake of Silent Night, Deadly Night, is a textbook contemporary slasher film. It has all the characteristics of the subgenre, from the fearless Final Girl to the several nubile female victims and the punishment of free sexuality. The story is about a murderous Santa Claus who terrorizes a small town on Christmas Eve and the efforts of deputy Aubrey (Jaime King) to track and arrest him. Aubrey burns Santa with a flamethrower to become a new take on the Final Girl.

Even if he is not the “real” one, this Santa Claus takes his job very seriously and tries to kill only the naughty persons, while letting the good ones live. Above all, he is not dealing mainly with kids – even if one victim is a pre-teen girl – but with adults showing dubious moral behavior. He slaughters the population using a wide array of weaponry including an ax, a cattle prod, a flamethrower and a wood chipper. Some weapons are advanced for a slasher film, since the subgenre uses mostly pre-technological ways of killing. This representation of Santa is based on an ethical code (common for a slasher film), which dictates that every person who breaks the rules will be murdered by the one who usually just checks for those who are naughty or nice. 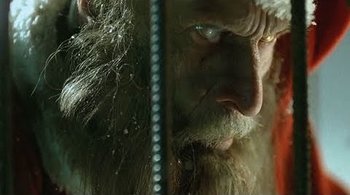 This Finnish horror film not only asserts to kids that Santa Claus is real, but shows him punishing the naughty. The story is about a group of local reindeer herders that have their Christmas disturbed by excavations on the Korvatunturi mountain. A scientist has ordered a team of workers to uncover what is referred to as a “sacred grave.” However, the occupant of the grave is still alive and is the real, though evil, Santa. When an elderly man is caught in a trap, he turns out to be one of the elves who lure and trap the naughty children for the actual Santa, who remains in the grave.

In this film, we have an elf that looks a lot like the archetypical figure of Santa, a fact that misleads viewers. But the structural representation of Santa as the Other of the community remains the same – though unseen, he remains a menacing threat. Of course, the difference between Silent Night and Rare Exports is that, in this case, Santa seeks to punish only naughty youth.

The last example is a Dutch horror/comedy film that explores the legend of Saint Niklas. In the Netherlands, Sinterklaas is celebrated annually with the giving of gifts on 5 December, the night before Saint Nicholas Day. This figure is the equivalent to Santa Claus in English-speaking countries: an elderly man with white hair and a long, full beard, wearing a long red cape over a traditional white bishop’s alb. In this film, on 5 December 1492, a team led by mad bishop Niklas is killed by villagers who refuse to put up with Niklas’ looting and killing any longer. So, on Sinterklass in following years, Niklas’ gang returns as vengeful ghosts.

This “Santa” also kills naughty persons, but he does not stop there. He is the embodiment of pure evil that hunts and kills every person in its way. The narrative is largely inspired by slasher film conventions – there is a group of teenagers to become Niklas’ victims, while a person of this group manages to stand out and be the final survivor of the film. Here a male police officer in 2010, whose family was massacred by Niklas in 1968, takes the place of the Final Girl as he helps to successfully break the curse and save the town.

Sotiris Petridis is a Ph.D. Candidate in Film Studies at Aristotle University of Thessaloniki, Greece, and has been awarded a scholarship from Onassis Foundation for his doctoral studies. He holds a bachelor’s degree in Film Studies (Aristotle University) and a master’s degree in Art, Law and Economy (International Hellenic University). He is currently teaching Film Theory and Film History at the Institute of Vocational Training in Thessaloniki. Contact: sotospetridis@yahoo.gr.