The Grays of the IMAX Oz 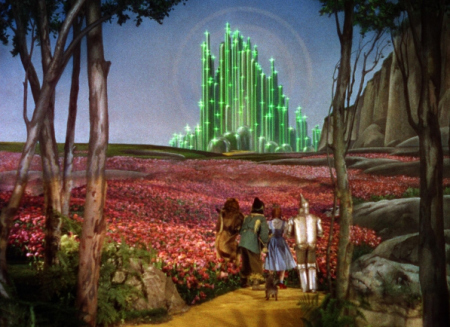 While viewing the new 3D IMAX version of The Wizard of Oz, I didn’t notice anything different in the film’s central color portion. The hues are warm, just like the experience of viewing among first timers who are lucky enough to see it on the big screen. The differences were in the opening and closing monochrome portions.

The opening scenes, of Dorothy innocently causing a stir around the farm, have a depth of field greater than in earlier versions. While the painted background is more visible, its texture is vivid, leaving us to yearn for 3D backgrounds of The Bride of Frankenstein and other Hollywood expressionist works. The set design, especially of the natural elements, shows expert construction (and how much would we love to see The Night of the Hunter‘s brilliantly bizarre river banks thus?). Oz appeared when monochrome cinematography made major steps, and the new format lends more verity in its framing portions than in the “payoff” middle section.

All these benefits bolster the closing scene’s theme, which is run-of-the-mill classical Hollywood conservatism. When Dorothy awakes and overjoys at having returned home, she’s framed by all the town folk who had become different characters. The stuff of her dreams was already with her, they suggest, and provincial life is best. The window above her, and the expanse of space it reveals, implies little chance for escape. With the minimal opening locking her in, the viewer is urged to commit to the film’s ideology. Appearing at the end of the Great Depression, we can regard the sentiment as a safety measure, and once again, the film offers little insight beyond its nostalgia.

Matthew Sorrento teaches film at Rutgers University in Camden, NJ. He is the author of The New American Crime Film (McFarland, 2012) and a contributor to the forthcoming Wiley-Blackwell Companion to the War Film.

2 thoughts on “The Grays of the IMAX Oz”