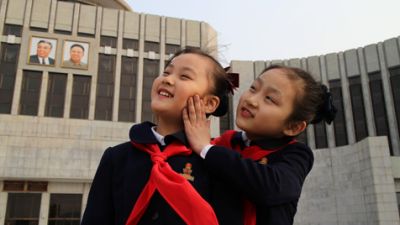 Under the Sun, a documentary by Soviet-born and -raised director Vitaly Mansky, starts off like an slice of life type of cinéma vérité, filmed in the winter dawn hours in downtown Pyongyang. The city looks grey and run-down, and the streets between the aging apartment blocks are covered with slush and ice, while speakers blare the party slogans of the day, then continue to extol people to join the official morning gymnastics. Some folks actually follow the instructions, doing their routine morning workouts as the speaker voice demands before heading off to work or school.

The film introduces the viewer to 8-year-old Lee Zin-mi, the main character in the documentary. Zin-mi and her best friend arrive early to school, where the two girls can be seen enthusiastically polishing their classroom tables while singing a song that praises North Korea as the most beautiful country in the world. Their class begins and the teacher tells a story, also printed in the official school textbook, on how a young Kim Il-sung, later the founder and leader of North Korea, threw a boulder at Japanese colonizers and their Korean allies, vowing to kick out all Japanese and their Korean feudal lords. It’s a pure indoctrination session. The students have to repeat and memorize every word of the textbook: the Japanese are bad, and their collaborators (especially the United States) are their puppets.

At dinner time at Lee Zin-mi’s home, father, mother and daughter sit at a table sumptuously laden with traditional Korean food: rice, kimchi, various meats and a plethora of side dishes. The dialogue between daughter and father is about the kimchi, the traditional spicy Korean pickled cabbage, claimed to be an especially healthy food not only in North Korea but in the South as well. While the scenes taking place early in the morning include a bespectacled older official, shouting “Move!” or “Action!”, the dinner scene makes clear who that official actually is: a North Korean “co-director” of the film, whom Mansky undermines.

The dinner scene and its dialogue are repeated over and over again and we always see the North Korean director on screen giving instructions to Zin-mi and her parents on how to act. He tells them to “act naturally, like you do at home” (implying that the home on view is not their real home), he tells them to repeat their little kimchi dialogue over and over again until he thinks it has been carried out enthusiastically enough. This scene, starting about 20 minutes into the movie, makes it absolutely clear what is actually going on: this film was supposed to be a scripted fake documentary serving as an international Pyongyang propaganda tool, extolling to the world about the happy lives more or less ordinary Pyongyang residents lead under the leadership of their trusted leader Kim Jong-un. Mansky’s role in the game was to act as a supposedly neutral mouthpiece. 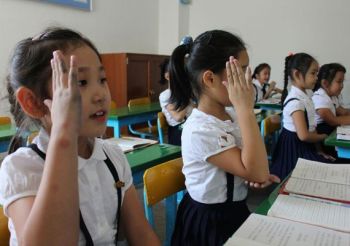 Mansky had to turn in all filmed material every night to the North Korean censors and they decided what he could keep and use while even the most slightly objectionable scenes were deleted, leaving him only with material fitting Pyongyang’s purposes. But Mansky managed to subvert the intentions of the North Korean propaganda masters: he used a digital movie camera that held two memory cards. One card captured only the scenes Mansky intended to give to the North Koreans for checking, while the other card recorded the complete shooting process, all the breaks, rehearsals, all interruptions by the North Korean staff. The North Koreans never found out about that secret material being shot until the completed documentary hit the international film festival circuit. It was too late by then.

North Korea had been successful before with the same scheme: the documentary A State of Mind (2004) by British director Daniel Gordon immediately springs to mind. Produced on a grander scale than Mansky’s movie, A State of Mind followed two young girls, filmed living with their parents in “ordinary” but actually very luxurious Pyongyang households while preparing to participate in the Arirang Mass Games. They work hard, they cry at times, but they absolutely want to show leader Kim Jong-il how well they can perform their dance moves in the mass games, hoping the Dear Leader would attend their performance. Hailed by the Western press at the time as an astonishing insight in real life in Pyongyang, the film claimed to have been made with “unparalleled cooperation from the authorities who … neither interfered nor sought to censor any of the material.” The film’s voice-over even stated that “For the first time ever, North Korea would reveal itself to outsiders.”

Nothing could have been further from the truth. That many scenes of the film were obviously staged was clear to anyone watching when it hit the festivals as a new production. But those were the days of the Sunshine Policy of friendly relations with North Korea and therefore most critics accepted the “documentary” at face value. Mansky’s film, however, finally reveals the extreme extent to which officially North Korean documentaries co-produced by the West have been staged by North Korea: only images absolutely supporting the official party line were permitted.

In an on-screen note Mansky states that, “The script of this film was assigned to us by the North Korean side.” The “North Korean side” meaning the Korea Film Export & Import Corporation in Pyongyang, the government agency in charge of all international film trade and co-production. Mansky later said that he had sought to contact North Korea first and that he had in the beginning a hard time getting through with his efforts but that eventually the North Koreans agreed on a film project. On their terms, of course. The North Koreans decided on the script, the locations, and it was them who introduced Lee Zin-mi and her parents to the project. Never mind that they changed the professions of the parents in the process of filming. The father (a newspaper journalist) became an engineer in an exemplary garment factory, the mother, a cafeteria worker, became a heroic soy milk factory worker.

Mansky’s secret recording of the staged scenes leads to a quite few hilarious scenes. In one take, for example, a garment factory worker (in fact, a garment workshop leader, she is being corrected to say by the North Korean co-director) gushes that the workshop had fulfilled the government quota by 150%. In the next take of the same scene, she ratchets the number up to 200%. No objections from the co-director this time.

Mansky may well have killed a whole “documentary” sub-genre with his movie: the subgenre of the well-meaning naïve co-productions by blue-eyed foreigners falling for the bait-and-switch game of North Korean promises of “unfettered” and “exclusive” access to the country. It was about time that someone finally slaughtered that deceptive beast.

Johannes Schönherr is the author of North Korean Cinema – A History (McFarland, 2012).