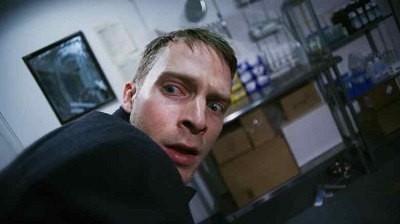 Larry Fessenden has plenty of fans. A versatile producer, director, writer, editor, cinematographer, and actor in dozens of low-budget flicks, he’s left his mark for more than two decades on the horror genre. Since he’s heavily influenced by the classic Universal monsters, it is not surprising that his latest entry, Depraved, is a soulful, Brooklyn-based retelling of the Frankenstein legend, some 200-plus years after Mary Shelley birthed the beast and many dozens of films after Thomas Edison unleashed his version in 1910.

But first, briefly get acquainted with the 20-something web-designer Alex Clerval (Owen Campbell), a sweet, dorky, sorry-to-disappoint guy on the verge of moving in with his girlfriend, Lucy (Chloë Levine), who is constantly expecting more from him. After leaving her place in a state of emotional discontent, he doesn’t get far before being brutally, and most fatally, stabbed.

Fessenden, feeding on that bloody event with a constant array of phantasmagorical images, begins a psychedelic march into hell for Alex, who awakens with one milky eye, a totally new look, and an assortment of new body parts (yet, seemingly perfect vision). Still, something else is off – his memory. Covered in nasty scars and incision splices, nothing is familiar. We know, of course, because this is a mad scientist movie and, doh, his brain’s been transplanted. But for the “infant,” he initially just goes along for a drug-induced lethargic ride. He accepts his new name, Adam (quaint!) when instructed. In his first steps, it’s obvious that Mr. Breaux is portraying a monster in training, but one who will steady himself as the film progresses. Man, is he bald-headed ugly! But, oh, is that makeup so cool!

As for the good, young doctor who created him, that’s Henry (David Call), a surgeon who’s had too many visits to the Mideast war circus and suffers a untreated case of PTSD. Wait, where is that huge electric storm and chain trolley atop of the old European fortress we remember from the 1931 Frankenstein? Well, the big shock of rebirth in Depraved is that the budget, apparently, didn’t allow for such pyrotechnics, so you’ll just have envision that on your own. Instead, Fessenden flavors his film with plenty of frightening, multiple-exposure montages, fractral designs, and fractured memories (the better to show off his editing skills), including brief thoughts of Lucy. There’s a sprinkling of Lovecraft in the script (by Fessenden, who also did producing, directing, and editing).

Poor Adam is just a misunderstood newborn, who has to rejuvenate his life and social skills. He’s a very quick learner, courtesy of the medicinal regimen centered on a big red pill called RapidX concocted by Henry and his benefactor. That would be Henry’s uncle (Joshua Leonard). In a nod to 19th-century author John William Polidori (famous for this story “The Vampyre”), this relative carries that writer’s name and a boatload of predatory characteristics, as well as a greedy, big business appetite for blood-and-guts bucks in the re-animation market. (Be assured that no vampires were harmed in the making of this film.) Greed consumes Polidori’s character in his entrepreneurship run amok scenario. Think King Kong, with Polidori being a crazed variant of Carl Denham. All he sees are dollar – not stop – signs. The show must go on.

Fessenden fashions his character-driven film in segments. The first half hour showcases the monster’s arrival, healing (his hair grows, his bad eye clears), and education. That’s followed by the man-child’s coming-of-age awareness of the avaricious world that has created him, thanks to the all-too-avaricious Polidori. Whiskey, cocaine, and sex clubs are part of Polidori’s too playful introduction to the darker side of life – and you’d think the businessman would want to be a little more protective of his pet project. Inhibitions be damned as this chapter moves forward. At the hour mark, the one-month-old Alex learns his origin, becomes an amateur detective, and turns tormented man-on-the-streets. He also remembers more about Lucy, from artifacts that should have long been discarded by his mentors (but which allow the holes in the screenplay to be plugged). The last 40 minutes are part mass cover-up and some earth-turning, out-in-the-remote woodsy suburb surprises. And it wouldn’t be such a deliriously bloody ending without a well-worn thunderstorm.

Fessenden has a good cast to play with, particularly Breaux, who shows a distinct fierceness in how he portrays the “monster.” At moments his character’s brooding pot-about-to-boil personality seems like a young Christian Bale, on the verge of some outrageous action. One scene that is particularly effective is when the fish-monster-out-of-water gets chummy with Shelley (another homage-to role, played nicely by Allison Timlin), a young woman in a local bar. Their brief friendship showcases some of Fessenden’s best writing as Shelley comforts his wounded soul and his awkward dialogue. This morphs into a strange re-imagining of both the little girl sequence of the James Whale Frankenstein and the hope of a monster’s bride-to-be.

It’s not a great film, but it is nice to see how Fessenden has put a nice off-kilter spin on a classic story.

Swimming in Poetry: The Shape of Water

On the Road to Nirvana: Jodorowsky’s Endless Poetry