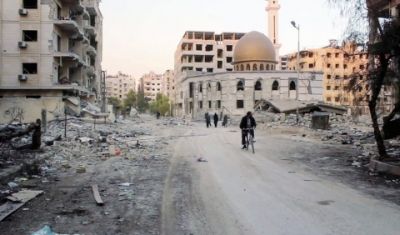 Mohammed Ali Atassi brought his second documentary, Our Terrible Country, co-directed with Ziad Homsi, to the Viennale 2014. The film follows the perilous journey of the Syrian intellectual Yassin al-Haj Saleh, at a time the country has been torn apart by the ongoing war. This road trip turns out to be a journey shared between Yassin and Ziad through the desert to Yassin’s native town, Raqqa in Northeast Syria. Before they reached Raqqa, the town had become mostly under control of the Islamic State in Iraq and Levant (ISIS). Yassin later left for Istanbul, and Ziad joined him after being released from ISIS’s prison. Up until the day of interview, there is no news about Yassin’s wife, the human right activist Samira Khalil, and his two brothers, who have been kidnapped by ISIS. This is a lucid picture of war and its omnipresent impact, intentionally infused with very little portrayal of any fighting. Posing questions instead of providing answers, Our Terrible Country reflects upon alternatives of representing Syria and documents Yassin’s journey and exile in its full complexity and with a lot of tenderness.

In conversation with Film International‘s Yun-hua Chen, Mohammed Ali Atassi elaborates on his choice of images and the role of intellectuals in a country in crisis.

What was the starting point of this project? How did you meet these people and how did you come up with this idea? 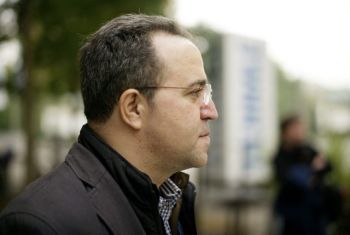 When there is such a huge crisis in a country like Syria, it becomes surrealistic to write a proposal, have a synopsis, prepare for the shooting or find a team to work with, all these classical ways of making a documentary. It’s not the case in this situation, but at the same time I didn’t want to look for an easy solution, such as shooting like a citizen journalist for lacking the means to do it differently. After discussion with other Syrian filmmakers, it was clear from the beginning that we wanted to talk about violence, and most importantly, without showing violence itself, in order to bring some dignity of the Syrians. We do not want to create an orgy of images in Syria, like what has been done a lot in mass media and social networks, YouTube in particular, and want to create another kind of images. Yassin has been a friend of mine for quite a long time, since he was released from jail after 16 years and before he became a very famous intellectual in Syria. I met Ziad Homsi when we worked together in a series of film projects called “Bidayyad”. Yassin was from the beginning of the uprising went into clandestinity in order to be able to write and to be more active and to feel free to write what he wants. I was able to communicate with him via social media and via skype. Later he decided to move from Damascus to the suburb city called Douba, we call it the liberated zone because it was under the control of Syria free army and not anymore the regular army of the regime. I felt the responsibility to do something or try to document his life there, in a very simple way. Later on when Ziad went for the road trip with Yassin to Rakka, it was a kind of cinéma d’urgence. We didn’t have any news from both for three weeks. Yassin was actually travelling with 3 or 4 batteries and a small camera, so he was forced to choose the moment of shooting on the spot. Ziad was on the road with Yassin not just for shooting, but because he wants to be with him. Between reality and film, it is sometimes blurred, which makes documentary very interesting as an experience. For me it was clear that now Ziad is not only cameraman or co-director, but he is also a character. Ziad later decided to go back to Douma after we moved from Rakka to Turkey, and there he was arrested by ISIS. He spent two months there. It was my duty to continue with the work, waiting for his return. I am happy that he came back, but later we knew that Yassin’s wife and her group of friends were kidnapped by ISIS. It’s difficult because the reality goes far beyond all kinds of documentaries. This is why we decided to keep the film open because we don’t have any kind of answer or ending to the film. It deals with life of real people, and this real life continues.

How did you decide to focus on the beginning of the story, and to keep a lot of ellipsis of time towards the end? In the beginning the time in the film was more real-time than in the end… 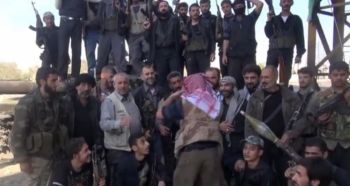 This goes with the development of the journey. In the beginning of the film it was more intense because of the reality, but later, when we went to Rakka, it was mostly under the control of ISIS. We were forced to stay behind four walls in an apartment and were unable to go to public space or to shoot. Yassin is again in clandestinity in his own city and we were stuck with him there, all the while hearing the sound of bombing. In Turkey the images are not only about the exile but also the loss. One of the image which I like very much but I don’t know if I succeed in transmitting the feeling is the first scene we did in Istanbul, when Yassin tried to go through a metro gate without knowing how. For me this is what it means to be in jail for 16 years; time stopped in jail but in reality time continues. In front of the metro gate he was like a child or an extraterrestrial being. So, whereas the first part is more about action and road movie, the second part is about the loss, the exile, the waiting, temporality and time.

You mentioned how western media was portraying the country and you want to do something different. Would you like to talk a bit more about how you deal with this in your film?

We are not doing any kind of news reportage. We are telling our own stories, our feelings and our ways of looking at the life. There is a certain universal value in this, which people from different parts of the world all share, such as friendship, separation from the beloved one, the role of intellectuals, the gap between idealism and reality etc. We want to show that Syrians are not just nameless people in military uniforms or crying face in front of camera. We work for one year to shoot, to go more deeply and to bring something more than what is shown everywhere. I don’t think that we succeeded but I am happy that we took the risk. I certainly hope to be able to show this to Syrian public.

I found it very impressive the way you were building up emotions and how you were portraying Yassin as someone so humane, with strength but also weakness, and I was wondering what cinematic decisions you made in this portrayal. 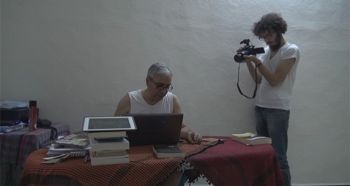 In Syria today we are showing heroes in a very Hollywoodian way and with a ‘macro’ view, but when you look at the ‘micro’, you see details and stories in all its complexity. When you deal with a very important intellectual, it’s interesting not to portray his talk or his way of thinking, but to show him as a human being behind this figure of intellectual. Imagine someone like Jean-Paul Sartre or Heidegger. We know their writings and bibliograpahy, but we don’t have the chance to feel how they live in their apartment. I think this is very important to bring different kinds of representation, including something more modest without big ambitions. At the same time that I portray Yassin and his relationship with Ziad, it’s also about myself, how I deal with the intellectual in myself. I am also trying to have this kind of objectivity to look at myself through portrayal of Yassin. Different layers work side by side with each other, but there is no answer.

It’s not an easy scene, but it says a lot about the clash between intellectuals, not only Yassin but also myself, and ordinary people, as well as between activists and the people whom activists want to liberate. We were not sensitive to people’s way of life and were very sure about ourselves. We asked questions and interfered in their life. We got what we deserve at the end. The scene was about this old man’s wisdom and how in simple words he summarised a number of issues in Syria and Syrian regime. This scene is more of a question about the role of intellectuals than an answer.

After completing her PhD in Film Studies at the University of St Andrews, Yun-hua Chen works as a film critic and writer for a number of on-line and print publications. She is currently based in Berlin.

One thought on “Different Faces of Syria: Director Mohammed Ali Atassi on Our Terrible Country (2014)”