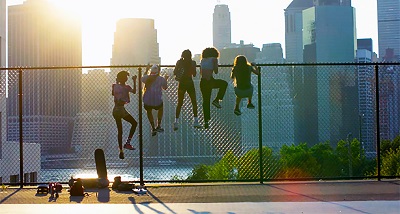 Skate Kitchen is director Crystal Moselle’s first narrative feature following her 2015 documentary The Wolfpack. I knew in the first five minutes that I was going to love this movie, and I absolutely did. Moselle has created a kind of lyrical poem, about New York, about skateboarding, about growing up, finding yourself. The film is naturalistic, feeling like the camera is simply following the real girls they ride their skateboards all over New York.

The film begins at a park with Long Islander Camille (Rachelle Vinberg) skating alone. She attempts a trick and fails, hurting herself badly. When her mom finds out, she freaks, and demands that Camille stop skateboarding. Luckily, Camille doesn’t listen. Instead, she sneaks out of her house to find The Skate Kitchen, an all girl skate crew that she follows on Instagram. She finds them one day in Manhattan and, just like that, she’s found her tribe. She doesn’t have to explain anything to them, they just accept her. Isn’t that what we’re all looking for? Being a teenager is hard enough. Finding acceptance, belonging, and friends who will stick by you? That’s just too much.

I try not to read too much about a film before I review it, but I had to know more about this story. How did Moselle find these girls – where did this story come from? Apparently, the filmmaker first came across the Skate Kitchen crew on the subway, she eavesdropped on their conversation, and then struck up a conversation with them (similar to how she discovered “the Wolfpack” to make her first film). The rest is history. 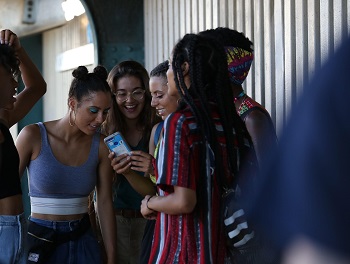 Moselle’s documentary skills make this film feel so real. Although the story was inspired by real life and every line of dialogue sounds improvised, it was indeed scripted. Moselle wanted the dialogue to be pulled from real conversations or at least sound like something the girls would actually say.

Instagram is also a big part of Skate Kitchen, since this is how Camille finds the crew and how one of those girls, Kurt (Nina Moran) recognizes and accepts Camille. Camille stays up at night, scrolling through the Skate Kitchen’s feed, laughing at their posts. There are plenty of scenes with kids looking at their phones, commenting on photos and videos. Teens just want to figure out who they are and are almost always fighting that sense of loneliness. Just wanting to belong and feel like a part of something bigger than yourself. Your parents not understanding what you love, even though later in life you realize they were probably just being protective. This film definitely made me nostalgic. While watching, I was completely enthralled, not taking my usual copious notes throughout. As far as coming of age stories, I think this one hits the nail on the head.

The style of the film puts the audience extremely close to its characters. Lots of tight shots, and sounds are all around you, as if you are in the room. The people look like people you pass on a daily basis. The camera is just an observer, passively capturing the New York that these kids live in. Then there are the scenes of the girls skating: the sounds of the wheels hitting the pavement, it just puts you there in that skate park. The wind blowing through their hair as they ride, like they don’t have a care in the world. These girls represent every girl who wants to just do her thing and not be judged or told they can’t because of their gender. This has mostly been seen as a boys game, but these girls come in and shred. Let’s please have more films like this!

I debated whether or not I should even bring up Larry Clark’s Kids, but I suppose I have to. Kids is a haunting film, shot in a similar style and following skaters in Manhattan. Both films use, for lack of a better term, real kids, which is why they work. The dialogue is believable and the actions make sense, because we as an audience can relate. We’ve all been that age. As much as Kids made an impression on me as a teen, Skate Kitchen holds a bit more weight. This story is very different and seeing these girls love something so passionately and have each other’s backs is just so amazing to see.

Thank goodness for Moselle’s curiosity. I’m so glad she approached these girls on the subway that day and that they developed a relationship that led to creating this film together. Go see it. See it with your girlfriends, daughters, mothers, everyone. Talk about it with each other. This is a beautiful film and one I hope to show my daughter one day. I hope she likes it and feels that she can relate to these girls.