An Invigorating Romp: Murray Pomerance’s A Dream of Hitchcock

The title of Murray Pomerance’s latest book on the films of Alfred Hitchcock, A Dream of Hitchcock (SUNY Press, 2018), refers to both the book’s content and its form. Pomerance means this book to be a study of the recurring motif of dreams in Hitchcock’s films, “dreamscapes, dream processes, the dream effect, the other worldly, the unknown and unknowable, the feelingfulness of experience, the nightmare of history” (1-2).

But the title refers also to Pomerance’s own stylistic approach to the films. Pomerance’s aim here is to dream before Hitchcock’s films, to approach the films in a spirit of openness and fancifulness that he hopes will open up new veins of criticism and steer him away from the numbingly familiar repetitions of Hitchcock scholarship. “As in dreams,” he warns us, “there may be passages on these pages that seem to wander in strange, circuitous paths,” but he hopes the book will have the effect of providing a model for readers of how “we can more patiently and dreamily watch and become absorbed in” Hitchcock’s films (3).

Pomerance makes it clear at the outset of the book that he does not aim to arrive at a final theory of dreams and dreaming in Hitchcock or a “watertight compendium of dream moments” in his films. The latter would hardly be possible, as Pomerance has limited himself, in this volume, to a rumination on six Hitchcock films (Strangers on the Train, Rear Window, Saboteur, Rebecca, To Catch a Thief and, Family Plot.) The book, in this sense, represents something of a companion piece to his earlier book on six other Hitchcock films, An Eye for Hitchcock (2004). 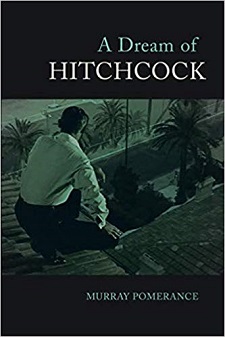 Richard Gilmore, in his blurb on the book’s back cover, describes the book as a “jazz riff on the six films under consideration” and that strikes me as an accurate description of Pomerance’s approach here. Pomerance takes a great deal of pleasure in bobbing and weaving his way through Hitchcock’s films, following trails as they appear, approaching the films in a spontaneous and playful manner that allows him to draw together a myriad of wide-ranging subjects and interests. Pomerance’s erudition is impressive and that erudition, coupled with the pleasure he takes in ranging freely within the wide environs of his knowledge, are the book’s greatest assets. The book has a lightsome feeling, as Pomerance travels, often at warp speed, from idea to idea. “Wrapped up in my commitment to responsiveness,” Pomerance writes, “I mean only to dance through the filmic structures in a respectfully musical way, echoing my curiosity and, I would hope, the structures Hitchcock has given us” (2). There is a lively play here between Hitchcock’s and Pomerance’s ideas, a good natured meeting of the minds, as Pomerance mines Hitchcock’s rich dreamscape for associations that excite him.

The pace and nature of Pomerance’s playful dance with Hitchcock can be dizzying. No one could accuse Pomerance of holding back in his display of interests. Strangers on a Train, for example, occasions reflections on late 19th-century amusements parks; Rear Window on the 18th-century and the invention of the microscope; Saboteur on the aircraft industry of Southern California in the early 1940s and Jean Paul Sartre’s “rejection of novel writing as surveillance.” The subject of greed in Family Plot leads to a digression on Ortega y Gasset and his reflections on Quattrocento painters and their fixation with the “things of this life.” A single page from Pomerance’s analysis of Saboteur (the subject is the scene in the blind man’s cabin) manages to draw into the conversation, Prospero and Caliban, Stanley Cavell, “Emersonian perfectionism,” William Rothman, Henry Nash Smith and the “Kantian realm of ends.” 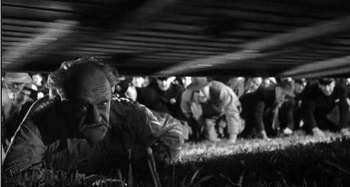 Needless to say, these kinds of intellectual pyrotechnics can, at times, wear on the reader, as Pomerance, himself, anticipates they might in his introduction. The “riffing” before the film leads, at times, to something that sounds like beat poetry cliché, as in his reflections on the small character of the carousel operator in Strangers on a Train, “the operator of a whirling universe, poised in the center of its mechanism or its spirit. Gears of the universe. Operator at the center. A stray bullet taking him out. Is this the death of God?” (53). Pomerance’s inventiveness also results in some purple prose, as in this analysis of the scream from the carnival love tunnel, in Strangers on a Train, that makes the audience wonder whether Bruno has murdered a young woman. “We easily imagine to ourselves that Bruno has done his deed inside the tube, a spermatozoon of evil conjoined with an ovum of innocence” (39). Some dreams are not meant to be shared.

And, at times, Pomerance is not entirely faithful to the goals he lays out at the outset of the book. Early on, he refers to the leaden plot summaries that have deadened so many Hitchcock studies, and yet his style of dreaming before the text means that he sometimes rolls out lengthy narrative sequences, commenting on them poetically along the way. He also writes that his “essays are written for any engaged and eager reader, and do not presume familiarity with any particular or analytical approach.”(3) But, then, what are we to make of directives like this one from his analysis of Rear Window: “On extractions and fields, read Roland Barthes, who in Camera Lucida frames the synecdochical problem as the relation of a punctum to a studium” (70). Eager reader needed, indeed.

Pomerance’s eschewing of the tedium of “close reading scholarship” also coincides with what might be termed errors in close reading. His summary of the characters from Rear Window, in particular, seem slapdash, for example this summary of Jeff’s (James Stewart) response to the newlywed neighbors and their constant lovemaking. “As Hitchcock arranges it,” Pomerance writes, “Jeff is bemused by the newlyweds, finds them adorably goofy, not prompted by them to rethink the so-called patterns of his own bachelor life” (75). But Hitchcock provides a host of reaction shots on Jeff’s part and snippets of dialogue that suggests Jeff’s reaction to the newlyweds is troubled and complex. Take, for example the moment when Jeff’s girlfriend, Lisa Fremont (Grace Kelly), points to the Newlywed window, with its closed shade, saying, “for all you know there is something sinister is going on behind that window,” and Jeff responds, with a smirk, “no comment.”

These criticisms aside, A Dream of Hitchcock represents an invigorating romp through Hitchcock’s work. As much as Pomerance enjoys his own ideas, he manages always to keep the focus on Hitchcock. The ideas arise organically out of the fruitful terrain of Hitchcock’s films. And the book is refreshingly void of the tired observations and clichés that are repeated ad nauseum in Hitchcock studies. Pomerance’s ideas are fresh, novel. His display of erudition is impressive, not only in its breadth and variety, but in the great pleasure he takes in it, the infectious enthusiasm with which he roots about in the dreamscape of Hitchcock’s films.

John W. Fawell is professor of humanities at Boston University. He is the author, most recently, of Ernst Lubitsch’s The Student Prince in Old Heidelberg (Lexington Books, 2018), along with Hitchcock’s Rear Window (Southern Illinois University Press, 2001, 2004), The Hidden Art of Hollywood (Praegar, 2008), The Essence of Chaplin (McFarland, 2014), and The Art of Sergio Leone’s Once Upon a Time in the West (McFarland, 2005).

What Shall Remain Unseen?: Hidden Hitchcock by D. A. Miller

In Defense of Hitchcock and Serious Criticism

Why the Neglect?: Lubitsch’s The Student Prince in Old Heidelberg (1927)

Filling a Gap: The Music of Charlie Chaplin by Jim Lochner

Still More to the Story: I Am a Fugitive from a Chain Gang! by Scott Allen Nollen and Paul Muni by Michael B. Druxman