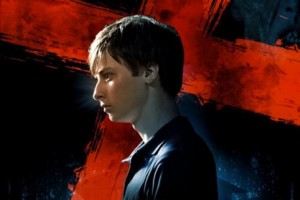 Camp Hell (2010) is not as the title may suggest an expose of the outer fringes of gay culture. What we have instead is something often anomalistic within the genre in which it comes – a horror film which attempts to be serious. Whether it succeeds or not is open to conjecture.

The story takes place at Camp Hope, a spiritual retreat run by a devout Catholic community, deep in the woods of urban New Jersey. At the end of each summer teenagers are sent to the camp by their parents to escape the evils and temptations of the outside world, and in the process be brought to a closer relationship with God. The camp is run by the puritanical priest Fr. Phineas McAllister (Bruce Davison), whose influence over the young people in his care is mirrored by the hold an evil spirit has on him. A spirit hellbent on the priest’s corruption and that of those he is seeking to save, especially Tommy (Will Denton), a boy who seems particularly susceptible to the ways of the flesh. 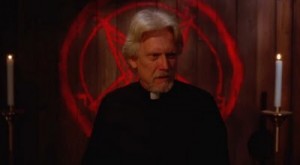 In recent years there has been a significant decrease in the number of films that could be said to fall inside a recognizable group within the field of horror. Until the 1980’s the religious horror film, though perhaps never a fully recognized entity in its own right, certainly had had enough entries to qualify it as a legitimate sub-genre in the wider spectrum of the macabre. From early studies of the occult, such as Danish director Benjamin Christensen’s documentary Häxan: Witchcraft Through the Ages (1922) through to Ken Russell’s notorious masterpiece The Devils (1971) and the archetypal good versus evil shocker The Omen (1976), filmmakers have found the age old battle between the church and the Devil a rich mine of inspiration.

However from the late 1970’s onwards the decline in this type of film could be seen as an indication of the church’s waning influence on secular society as a whole. Modern classics, such as John Carpenter’s revered Halloween (1978), which could be taken as heralding a new era in films that take a humanistic approach towards the sources of the evil found in everyday society, focus more on the human beings themselves as the source of evil, rather than any imagined battle between the Devil and God.

So has American-born director George VanBuskirk succeeded in reviving this long stagnant sub-genre, with his take on the summer camp horror film made popular in the 1980’s? Well, yes and no.

As an homage to the teenager-in-peril films, such as Friday the 13th (1980) and The Burning (1981) set in and around that staple of American childhood, Camp Hell does little to inject life into that particular neglected field. There is not much, if any, stalk and slash, with the evil spirit which haunts Fr. McAllister only manifesting itself as a hood shrouded monk-like creature at the climax. Apart from an effective mass possession scene in the girl campers’ cabin, there is little more than the standard rustling in the bushes to scare the viewer. 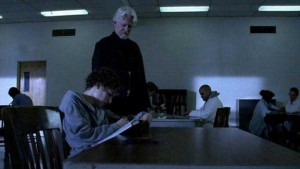 What is unsettling, however, and serves to redeem the film from what might otherwise be a straight to DVD release, is the way the influence of the Catholic church is depicted. The strangle-hold it has on young and impressionable teenagers, or adults too scared to search for the truth themselves in fear of the consequences they have been taught will be meted out to them if they fail to follow the strict guidelines set down by their priests, is truly disturbing. Fr. McAllister’s treatment of his young charges, with a particular emphasis on the suppression of teenage sexual urges, clearly results from his own failings and inadequacies in this area, something which may well be a reflection of the recent controversies surrounding the real life Catholic church. His hellfire and brimstone preaching, as he warns the youngsters what will happen if they stray from the straight path, certainly places him amongst the higher echelons of movie land’s mad men.

If taken on a deeper level, though Camp Hell may not necessarily deliver the kind of terror its poster and advertising campaign would first lead you to believe, it taps into a much darker vein of horror for the discerning student of sinister cinema.

Cleaver Patterson is a film critic and writer based in London.