Scripting for the “Old Hands”: An Interview with Charles Agron and Tobin Bell on Dark House

Victor Salva has long had a popular career in the horror genre with titles such as Clownhouse (1989) and the Jeepers Creepers franchise (beginning in 2001, with Part III in the works). His latest offering, Dark House, mines some known territory of the eternal (and essential) battle of good and evil. If you’ve seen the previews, you’ll notice many familiar conventions: the aforementioned old dark house, dramatic music cues, inserts of ventilation shafts that harbor dark forces, young people venturing into the woods at night, the old guy who works with some expository dialogue. You might be wondering, when does “familiar” descend into “shopworn?” Is Salva’s noted polish and assured pacing enough to make it worth your time? Debuting screenwriter/producer Charles Agron and actor Tobin Bell (Jigsaw from the Saw series) believe so and feel Dark House to be fresh enough to elevate it from the pack. Here, Film International talks with both about how Salva’s latest came to fruition.

Mr. Agron, I read you’ve had this story idea for Dark House for some time. What inspired it?

Charles Agron: Well, I’m a huge fan of The Twilight Zone, and Ilove stories involving fate. As a long-time horror fan, I thought the

idea of spinning fate was so interesting. What if we could change their fortune for the good, and put an evil spin on fate? That scary movie vibe, with a young man with a curse of a house he saw in his mind, is he the greater pawn of something? What reaction would people have to Nick and Eve, with Luke [Kleintank] and Alex [McKenna] drawing the viewers in? Will it unsettle the audience? Of course, you have to care about the people, you’re hard pressed to follow anything else if you don’t, but the actors did a great job giving it life.

How did the hook up begin with Victor Salva?

CA: It came through my friend, Don E. FauntLeroy [cinematographer]. He passed [the script] on to Victor Salva, and when he expressed interest in directing, I was very excited.

CA: Very much so. The man has set box-office records and is an established director. It was an exciting leap of faith, and working with [Salva] on the script was amazing. He appreciates good characters and a good story. He has taste and brought in such an atmosphere. He’s a professional and made everyone around him comfortable, and when you’re comfortable, it’s more believable. I just felt confident because he really was feeling connected with all the actors.

Is there anything you admire about the style of directing by Mr. Salva that you felt suited your screenplay well?

CA: As a director who has set box office records, I mean, it’s an exciting moment for me. It was a no-brainer; he’s the mind behind Jeepers Creepers — an artist who takes what he does very seriously.

And the moment you walked onto the set in Greenville, Mississippi and the excitement you felt seeing your screenplay come to life behind the camera?

CA: (Excited) Nothing can describe that feeling when the movie trucks are there and the craft and make-up people…I mean, to see all this when you walk on your first movie, it’s just indescribable excitement and you just can’t wait to see what the director brings up!

Will there be a Dark House 2?

CA: I’m very excited when I’ve been asked about a Dark House 2.

Tobin Bell: The backdrop is huge, it’s biblical, by that I mean the struggle that has gone on and continues to go on between good and 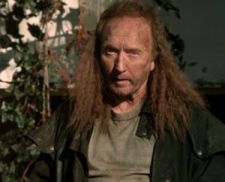 evil. You meet this guy [Seth] in the house, and you don’t know who he is and when you do, this flip takes place. The guy in the way in fact is not who you think he is, and there is an inversion in the way of innocence. The backdrop and landscape can continue this story and there’s lots of room for growth. You have a wide range of issues that work within the format of good versus evil, and it lays the groundwork for an expansion of themes and ideas. Seth [Bell’s Character] could take any number of any dimensions and shapes.

Victor Salva has referred to you as the Sir Alec Guinness or the Obi-Wan Kenobi of the cast, because you have had such a strong and prolific career as a character player (SAW, 24, Mississippi Burning). Do you feel that sense of at least light-hearted reverence from anyone when you’re set?

TB: (Laughs) Well, that’s flattering for him to say, but no, we all have mutual respect for each other, as it should be. Once those cameras rolled, these young actors were remarkably skilled and had training and they didn’t need me to school them on acting. We were all concentrated and focused, and Victor could work with any of us to come to an understanding.

How was it working with Salva? Does he have a style or technique that puts the set at ease? Does he give you room to try many things?

TB: He’s a very sensitive guy, and he likes young people and he’s particularly good with young actors. That sense of trust is important for the cast. He made this cast of young people very comfortable, he showed respect to all of us, and he’s always open to an idea.

Rumor has it that you’re not a fan of watching horror films. If that’s true, are you amused at the wonderful irony given your success in the genre?

TB: (Laughs) It’s true, I never liked horror films when I was kid growing up. I was the kid that hid my eyes from the screen if something scary was coming up, but as an actor, it’s about the work. Regardless of what genre you’re in, you’re just playing the role and focused on the inner life of the character you’re playing.

Michael T. Toole is a film journalist and filmmaker. He spent ten years writing for the Turner Classic Movies website and is currently working on a book on Harry Rapf. His short films can be seen here.