Still Powerful in the Political: Lucy Lawless on The Code 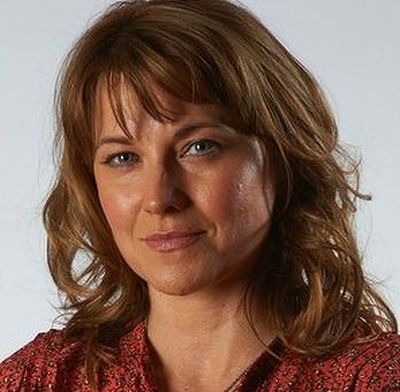 Lucy Lawless is no stranger to television. She has traversed time itself from swords and sandals (Xena: Warrior Princess, 1995-2001, filmed in her home country, New Zealand) and science-fiction (Battlestar Galactica, 2005-2009) to dramas down under in Jane Campion’s miniseries Top of the Lake (2013) and now Shelley Birse’s The Code (2014). The Code concerns a political cover-up involving aboriginal teens injured in a car crash. Offering an exploration into the cultural complexities of Australia, The Code connects to a piece Lawless penned for The New Zealand Herald on the “aboriginal handshake.”

Touching on the archetypal cornerstones of corruption and journalistic attempts to uncover the truth, The Code is the latest foreign import to fill BBC Four’s Saturday evening 9pm slot, diversifying British broadcast scheduling to showcase international television drama. Open to all UK viewers and therein void of an attempt to hold them to ransom (unlike its rival, the SKY Broadcasting Company), the BBC has branched out from European-based drama to take in a wider and valuable world perspective. 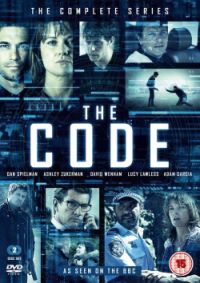 In conversation with Film International’s Paul Risker, Lawless revealed the importance of an early Disney animation in her journey to the screen; her initial impressions of The Code, and the opportunity it afforded her to play a character unique in contrast to all of her onscreen identities; as well as reflecting on The Code‘s place within modern storytelling and its pursuit to tell an honest story.

Why a career as an actress? Was there that one inspirational moment?

Yes! I don’t know how old I was when I went to see Snow White and the Seven Dwarfs (1937), maybe I was six or seven. But in one moment the back light came on, and all the paint on stage fluoresced. It was such an act of magic to my eyes that I just had to be there, and that was the beginning of everything.

The moment of realisation that films are created is an important moment in our relationship with films. Can you recall the point where you realised the experience films had on you were actually created by an entire team of people?

Oh, I totally remember. I was sitting watching television with my older brothers who were talking about how somebody gets paid a lot of money to do that, and I thought, oh my God, that’s a job! Anyway this is a very pedestrian example of what you are fishing for, but that’s what occurs to me when you mention it. There are whole crews; it’s not just the people who you see, and everybody can have a job in that world if they want one.

What was the appeal of the character and the story when you first read the script for The Code?

It was such terrific writing that I grabbed the role that was offered to me. I was actually the first one on the payroll because of how strong the writing was, and I didn’t want to wait around to see who else signed on in case somebody else took my role. Fortunately everyone else who came on board was incredibly brilliant, and it was just a fantastic coming together of talent; much credit goes to Australia and its industry.

As an actress can an interest in a project be pre-dominantly driven by story or must it always be a mix of character and story?

Ideally you want to weigh up the overall script with the character, along with what you think you can do with a character, which is married to high quality producers. This is really the difference, because rotten producers can ruin a great script. But in terms of The Code, I obviously relished the chance to do something that was not sword and sandals, and I feel that of all the roles I have played, Alex is the closest to me. So it was a lovely chance to not have to act.

Despite literally fitting into the character like a glove, I assume she still presented challenges, which required you to put your heart and soul into the performance?

You do, and I always worry about it. In this script there are no demon babies to worry about, and there are no centaurs that are going to run in and steal your children [laughs]. It has to be very real, and the moments that I look for are the surprises that occur for the characters as they discover things throughout the scene. It is there where the alchemy is, and you don’t necessarily plan it because it has to be organic. But you’ll mark out those moments and then it’ll just happen when you are opposite the other person. I was really proud of some of the scenes where she’s kind of interrogating the schoolboy about his girlfriend. I’m very proud to have been part of The Code; I’m proud of everybody as well as myself. 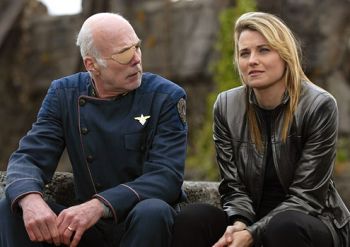 I would have to think on that a little bit, but it seems to me that what The Code does is it mimics the way that we digest data today. So you are experiencing it on three levels: an organic level, the characters and their relationships to one another, and then you are processing computer data on screen at the same time. Spartacus (2010-13) was similar in the way it was layered up, but obviously not with technology. You’d have the rich people and then the poor people, along with everything that was going on in which everybody is affected. It’s a zero-sum game in which when one person is up the other person is down. So the viewer is receiving several layers of information at all times. I think The Code is a little bit like that with technology being the added dimension. So you are doing a whole lot of triple thinking, and that’s what makes you feel smart, because it is smart.

With any story you want to engage the audience and pique their interest as it allows you to draw them in. The best storytelling whether in film, literature or theatre is an interactive experience.

You want some people in the room to be ahead, and some people to be saying, “Hang on, what? How did that work?” There needs to be a dynamic in the room. But it’s not all spoon fed and that’s what you are talking about. This is a new kind of and very complex impartation of information instead of dumb, dumb television, which is lovely and formulaic, but you know it is going to wind up after forty five minutes because it always does. The Code is beautiful and intelligent, and when I read it I thought or felt that it is going to be another Prime Suspect (1991-2006), but of our time. I am very happy to hear that it is being well received in the UK; it’s cool.

When you finally sat down in front of the completed product despite your knowledge and awareness did the show still have that impact?

Even more because of how the look of it was all conceived in the minds of the cinematographer and director. Shawn [Seet] directed every episode, and I don’t know how he did it. I have never seen one director direct six hours of TV before, and I have never seen anybody cope with that kind of information overload, especially when you are shooting out of order and with time cuts. It is unbelievable mental gymnastics that Sean was able to pull off with writer Shelley [Birse] on standby, and who also has a great mind.

I hope people in the UK don’t miss the cultural aspect of what it is like to be Aboriginal, and the white relations in Australia today; Aboriginal lawman versus his own community. There is a lot of stuff going on in the show that is extremely rich and powerful if you know what to look for. Being from New Zealand I had no awareness of the cultural issues except in very grave terms. It is a deep and profoundly thought out script.

Australia strikes me as a fascinating place, and a country still very much at conflict with its identity. One of the questions I was silently asking whilst watching it was how The Code would play to a European audience in contrast to an Australian audience.

I don’t know either because I am not an Australian, although when you meet an Australian and New Zealander we seem very similar, but the truth is that we are totally different because the encounters between the First Nations and the white settlers was completely different. I actually wrote a column about that for the New Zealand Herald. But I don’t know how that will be different either… But I guess that’s your job, hey?

Indeed. I’ve got to start writing about these points, and I’ll also have to look up your column which sounds an interesting read.

The New Zealand Herald about the Aboriginal handshake. However, the show is about the two brothers and how they move between the three worlds: the outback, Canberra, the halls of power and their own blogosphere. It’s interesting too that relationship between the brothers is one of love and affection with conflict. There are all kinds of things going on there, but it is brilliantly played out, and Dan [Spielman] is brilliant.

The series is laced with corruption and self-interest, which is offset by a great sense of optimism. Would you describe The Code as being neither optimistic nor cynical, but rather focused on the grey area between the two?

Well, I don’t think it is cynical in its approach, but I do think it is portraying something cynical and realistic, because in the town where we were filming we would see the aboriginal outreach station. I’m from New Zealand where in poor communities what we see most often are respiratory complaints from damp living and poor housing where it rains all the time etc. In the aboriginal community lead poisoning is the number one health issue, and not just for the aboriginal community but everyone in that area; especially poor kids and the aboriginals because the mines refuse to build roads around the town. They just want to drive right on through it and they are just spraying lead; all the kinds of stuff they use for Ethane and heavy metals. These kids have four, five or seven times the lead that is acceptable to the human body. So there are a lot of deeply cynical things going on in any major industry such as mining, and its effect on the poor populous. So that would be my answer. It is not cynical; rather it’s portraying something cynical and real.

THE CODE will be released on DVD and digital download on Monday, November 3rd.

2 thoughts on “Still Powerful in the Political: Lucy Lawless on The Code”