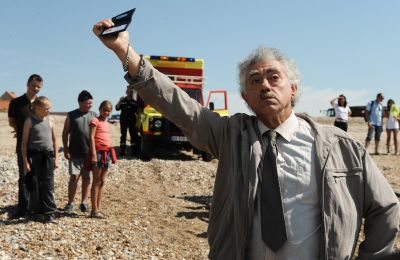 The European continent shares an intimate connection to the detective archetype. Nordic shows The Killing (2007-2012), The Bridge (2011-) and Wallander (2005-2013), alongside the French double bill of Braquo (2009-2014) and Spiral (2005-) as well as Italy’s Inspector Montalbano (1999-2013) have over the past decade or so forged an indelible connection between the detective and crime drama, and the identity of European narrative fiction. While an oversimplification for a continent with a rich and diverse artistic and cultural heritage, Nordic and European Noir, while commonplace on the continent, has captured the imaginations of British and American audience’s anew. This has served to shape the narrative identity of European fiction from the outside perspective.

Bruno Dumont’s vision of the detective presented in P’Tit Quinquin (2014) is a subversive addition to the genre. “Van Der Weyden is an agnostic of the detective genre” explains Dumont. “He does not believe in his work and does not achieve anything. He is an iconoclast within this tradition….” Equally its development as a a TV mini-series and subsequent theatrical release in the UK continues this subversive theme.

P’Tit Quinquin sees a return towards Dumont’s earlier detective and crime centred drama Humanité (1999), which won the Grand Prix at Cannes and was nominated for the Palme d’Or, while lead actor (Emmanuel Schotté) and lead actress (Séverine Caneele) were the recipients of acting honours. Humanité’s De Winter in contrast to P’Tit Quinquin’s Van der Weyden offers contrasts in which Dumont’s return to the genre seems to have evolved from humanist contemplation to comic surreality.

In conversation with Film International, Dumont reflected with a philosophical perspective on the identity and place of cinema, P’Tit Quinquin’s subversive place within the genre, and the role actors serve beyond performance, while offering a simple understanding of the connection between the narrative and its partial setting.

A filmmaker once told me: “Writing is like composing and directing is like conducting the orchestra.” As a writer/director how do you perceive the way in which these processes inform one another? 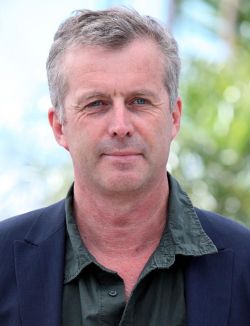 Cinema is – roughly speaking – a process of the annihilation of an idea, which in its final realization will have restored its formless and germinal mass. Cinema is a time machine. Script, direction and editing are the successive, continuous and chronological composition of this apotheosis.

The idea for a film comes first and is somewhat vague. It springs from the unknown. The film’s story – the seminal undertaking of the idea – is a construction that must obey some dramatic rules, and can also divert itself from it. Cinema is worth something if it experiments and attempts something new in the realm of the human, thus the starting idea must also be daring. The story will then be an attempt to realize the project in a simple and sensitive way. It is an authentic human and spiritual adventure, like any art form. The strength of cinema is that it is the art form in which the illusion of reality is the most powerful way to represent and cover the original spiritual momentum unique to each thing. Cinema, as such, is primitive.

Developed as a TV mini-series, here in the UK it is being released theatrically, which from my perspective forces it into a form that isn’t a natural fit. How do you perceive the way this will influence or impact the experience and reception of P’Tit Quinquin?

The auditorium is a spectacular place because the screen is larger than the spectator, and can therefore carry out the cinematographic process on him or her. TV is the opposite, with all the resulting consequences – notably that the spectator dominates the screen and is never at the height of what he or she sees.

Of course it could be argued that P’Tit Quinquin offers an opportunity for an interesting experiment with narrative form – the way it is both presented and watched.

Yes, cinematography must be in the auditorium, but first and foremost in the film itself…

While its premise is a crime story, P’Tit Quinquin is layered with an emphasis on comedy, while thematically it is juxtaposed with youth versus adulthood, the latter of which is comedic and a source of conflict. What were the motivations behind these choices, and what was the process of creating a complimentary balance between them to create an effective story? Is the crime story more of a core for everything else to revolve around or orbit?

The distortion of the real – in this instance the detective genre – is at play both in drama and comedy. If the real is reproduced as it is, then it is no longer saying anything. Drama and comedy are therefore forms of expression. With its innate sense of transgression, comedy is particularly explosive in expressing what we are. Burlesque is thus a real invention to represent us all, and it offers a particularly spectacular and clear understanding. Making something funny is a quasi-mystical form of imparting knowledge in the way it allows us to be revealed entirely, and as such it can be applied to everyday events that are turned upside down with banana skins.

Talking with Joe Dante recently about working with actors, he remarked: “If you cast it correctly you don’t even have to do a lot of directing, and that’s not to denigrate any of the other aspects of making a movie, which are all incredibly important. But the one element through the years that has made movies as popular as they are is the actors.” As a writer-director, how do you view the way in which the actors fit into the filmmaking and storytelling process? 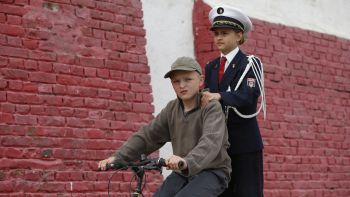 Actors are essential in the mise-en-scène because they are the ones that spectators will identify with, and experience the feelings and emotions they are going through. The way actors are filmed is important to express their experiences powerfully. ‘Good acting’ is as necessary as ‘good filming’ to reach the equilibrium and harmony of cinema itself; cinema blossoms in this happy whole that is made up of all its component parts (dialogues, editing, sound, actors, music and so on). All of this is therefore curiously essential in this composition that is cinema.

For the core of your cast P’Tit Quinquin is their first acting credit, which is a stark contrast to directing the venerable actress Juliette Binoche on your previous film Camille Claudel 1915 (2013), as well as working with her on your next feature film Slack Bay (2016). How does the youth or inexperience versus experience of an actor impact or influence the dynamic of the collaboration?

The interplay and clash of opposites is imperious to the expression of the natural mystery of things, because all these components form its very make-up. Cinema is the salutary place of this essential mix.

In P’Tit Quinquin, Bernard Pruvost turns in an inspired performance that almost seems to merge the physicality of performance with verbal performance, almost a mix of silent and sound cinema. Your thoughts on this reading and of the importance of Bernard’s performance?

I take Bernard as he is and shake him according to the fiction and the journey he goes through, of which he is the parsimonious interpreter.

Looking to literature the detective has a rich heritage beyond film, and European television in recent years have continued to add to this heritage. How do you perceive the way in which P’Tit Quinquin fits into this heritage, and in particular what does the story and the two characters of Van der Weyden and Carpentier contribute to the crime story?

Van Der Weyden is an agnostic of the detective genre: he does not believe in his work and does not achieve anything. He is an iconoclast within this tradition, a mystic who strides through or rises above this ‘stopgap’ that is human existence in general, and this police investigation in particular. He is a saint.

What does the small French town setting bring to P’Tit Quinquin and how much does the spatial setting influence and shape the feel of a story for the filmmakers and actors as well as for an audience?

One has to film somewhere, in a place full of character, where natural harmony and local habits are already established for cinema to be able to focus and start its undertaking there.

A filmmaker recently remarked that, as a director, you are not the same person as when you started. In some sense this is logical because experiences inherently change us. Would you agree, and how has P’Tit Quinquin informed your perspective of storytelling and filmmaking moving forward?

P’tit Quinquin is not so much an evolution of cinema as a deepening in which comedy is the new form, where once was drama and both are the expression of the same thing. Penetrating comedy is a deeper zone of exploration of the human magma, of which it captures more clearly, and in an adequate way the pit: a fatal farce. And hop là!

P’tit Quinquin is released theatrically in the UK on Friday the 10 July, courtesy of New Wave Films.