Not So Simple?: The Nasty Terrible T-Kid 170: Julius Cavero

Julius Cavero is a Bronx, NY graffiti artist who has been making art – both illegal and legal – since the 1970s and has made an international name for himself in the world of graffiti art. In 2006, he published an autobiography, The Nasty Terrible T-Kid 170 on the street art press From Here to Fame. Now, director Carly Starr Brullo Niles has released a documentary with almost the same title: The Nasty Terrible T-Kid 170: Julius Cavero. Cavero, the son of immigrants – Puerto Rican mother, Peruvian father – grew up running in the streets of the Bronx, immersed in the dance, music, and art of this urban culture and also the crime and drugs. He began his adventures on the playgrounds, doing tricks off of the swings, footage which Niles incorporates into her documentary. He also got into graffiti which led to his forced initiation into a street gang when he tagged on their turf. Whatever criminal activity he was involved in is mostly glossed over in the doc except for his near-death shooting, abandonment by fellow gang members, and his decision to leave the gang and devote himself, full-time, to graffiti.

Niles has access to an extraordinary amount of archival footage considering the pre-iPhone milieu of the now-middle-aged artist. We have a lot of images of Cavero’s younger days with many cuts to break dancers, graffiti artists, painted trains and walls, and artists working in train yards in the middle of the night, ducking under cars when trains pass, all amidst the urban blight of nearly-bankrupt mid-70s New York City. Niles, who also edited the film, nicely weaves together contemporary and historical grainy footage, smoothly splicing these non-linear images. In addition to the artist, Cavero’s work is contextualized, talking-head style, by other graffiti artists like Ivory tm7 and Goldie. 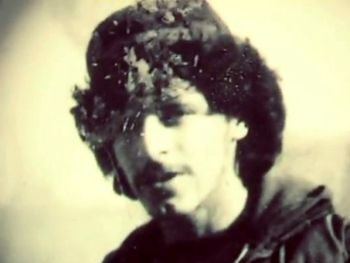 Niles asks Cavero, “What do you think about expressing  yourself on other people’s property?” The artist answers that he never spray painted people’s houses or cars, but only used public property surfaces – mailboxes, trucks, trains – because, as he says, “I am the public.” This is all well and good, but I wonder if the legitimacy of street art even needs to be argued post-Exit Through the Gift Shop (2010). We’re thirty years beyond the fame of Keith Haring and Jean-Michael Basquiat. The fact that Cavero is able to fly the world and support himself with his art is testament that he’s taken serious even if he’s not as famous as Haring and Basquiat (or Banksy or Shepard Fairey). Although the historical background concerning his early struggles is interesting, we get very little about why he’s an important artist now, just a lot of vague statements about the “flow style” and footage of Cavero writing big, bubbled letters. Watching the movie, I felt, sometimes, like I wasn’t a member of the intended audience despite my love for and existing knowledge about contemporary art. I felt a little bullied into accepting Cavero as a Great Artist, perhaps, because Niles gives him so much screen time and he projects the kind of macho bravado that gets tiring pretty quickly.

Considering that the film is directed and edited by a woman, three of the four producers are women, and the sound editor is a woman, I wonder why it didn’t occur to anyone to ask Cavero – or one of the other interviewees – what his opinion is about the fact that this art form is so male-dominated. (No women are interviewed in the film.) In Exit Through the Gift Shop, the only female artist to get any screen time is street artist Swoon and she gets less than five minutes. Surely, I’m not the only one to wonder about this male-dominated world. Or if that wasn’t interesting to Niles, maybe she could have asked Cavero why he thinks that, besides for Basquiat, mainstream success has mostly only come for white street artists. This film could have used a bit of an edge because, despite its gritty subject matter, it sometimes drags. At one point, Cavero brags about how the Bronx train yard where the city stored the subway cars when they weren’t in use was “his” yard and that he beat up artists who tried to paint the cars there. Great. That’s conflict. Get him to explore the ethics of that now, years later as a middle-aged man with a daughter or, better yet, find one of those artists to interview.

Cavero has some great stories about his youth. Many of us, if we were to meet him in a bar, would listen as long as he’d be willing to talk, and we’d be happy, probably, to buy him a beer. But who knows why he makes art? Who knows why he makes the kind of art he does, what he’s trying to say, what he thinks about the street art world, what he thinks about race and gender in the art world or being paid money for art? There are unfortunately no answers to any of those questions in the film. And that’s fine. But there’s also very little conflict which makes it a bit of a bland watch. Any interview – in film or on paper – is only as good as the questions being asked. As a viewer, I couldn’t help but wish that a whole lot of other questions had been asked.

John Duncan Talbird is the author of the limited edition book of stories, A Modicum of Mankind (Norte Maar) with images by artist Leslie Kerby. His fiction and essays have appeared in Ploughshares, Juked, The Literary Review, Amoskeag, Ambit and elsewhere. He is an English professor at Queensborough Community College.