The Good Life is director Jean Denizot’s feature film debut, and it proves to be a solid one. The film, based on actual events, follows a father, Yves (Nicholas Bouchaud), and his two teenage sons, 16-year-old Sylvain (Zacharie Chasseriaud) and 18-year-old Pierre (Jules Pelissier), as they live a nomadic life in the Pyrenees region of France. What viewers learn very quickly is that Yves has kidnapped his own children, more than 10 years earlier, when their mother was awarded custody. Unable to accept what has happened and risking a prison sentence, he scooped up his boys and decided to live a life on the run. For a decade, the family has been living the gypsy life, under assumed names, with no chance of settling down. 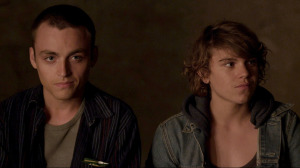 When we meet the family, they are living in a picturesque setting of green rolling mountains. The teens spend their days herding sheep, skinny-dipping in a nearby lake, and selling cheese at a local outdoor market, all set against a fun bluegrass soundtrack. Everything appears to be just fine. It’s not until you see the boys attempting to interact with kids their own age, that you realize just how sheltered their father has kept them. One day, missing children flyers appear in the village and the family realizes that they may have to flee, yet again. Chafing at this sheltered life, the older son Pierre escapes, leaving his younger brother behind.

This is really a coming of age story for young Sylvain. As a boy, he was happy to run away with his father. With his brother at his side, he trusted that what he was doing was right. When Pierre leaves, Sylvain meets Gilda (Solene Rigot), a young girl from the village. They become fast friends and Sylvain develops his first crush. Because of their fugitive lifestyle, the boys have been deprived of any teenage contact and, instead, spend their days in hard labor to eke out a life on the edge of society. When everyone around you is a possible threat, how can you let anyone in? This problem becomes most apparent when Pierre tries to talk to a cute girl in town, and when her angry boyfriend approaches, Pierre begins throwing punches.

Denizot and his cinematographer Elin Kirschfink have crafted a beautiful film. Set against a backdrop of fog drenched mountains and verdant hills, the film feels like a moving painting. Denizot shows us that, even in the chaos of these characters’ lives, the surrounding nature is static. Yves wants his sons to live a normal life, within their means. Money is not important to him. He wants the boys to have a simple life in a simple place, but The Good Life reminds us that nothing is ever that simple.