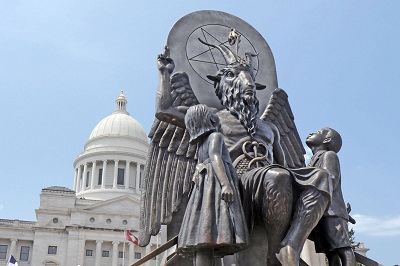 Never has a Penny Lane film been this funny. An academic-now-turned-full-professional-documentary-filmmaker, she has provided a window into the weird and wonderful for the last half-dozen or so years with her handful of features and several compelling shorts. She loves to take unusual relics of our planet and expose them in any variety of ways. Her debut feature, 2013’s found footage wonder Our Nixon (First Disclaimer: I was an associate producer) was fully compiled from archival 8mm home movies shot by three members of Tricky Dick’s White House staff. Three years later begat Nuts! (Second and Final Disclaimer: I was an executive producer), an animated, mostly-true documentary about the charlatan John Romulus Brinkley, a Kansas “doctor” who convinced folks a century ago that the best way to deal with erectile dysfunction was through a transplant involving goat testicles. Audacious and unbelievable. Last year’s The Pain of Others was comprised mostly of videos from three YouTube patrons who suffer from a creepy, is-that-even-a-real-disease called Morgellons and the strange solutions that seem to provide some relief.

So why not a film about Satanists?!

Working with her producer Gabriel Sedgwick, the pair toiled for two years on the feature. After gaining the trust of the principals behind The Satanic Temple (TST), a colorful and somewhat provocative religious movement, they collected some interviews, fly-on-the-wall material, and lots of news footage (local and national) about some of the group’s undertakings. The talking heads are lively and informative, with complementing and contrasting visuals in abundance, often to effective comic relief. Kudos to editors Amy Foote (Mavis) and Aaron Wickenden (Won’t You Be My Neighbor) for their wicked cuts. Add in whimsical original music by Brian McOmber, and you have a winner. 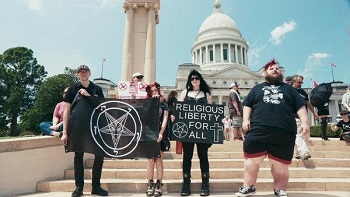 It’s important that you realize this international group of believers are not the Church of Satan established by the late occultist Anton LaVey, although there is a certain amount of shared showmanship between the two organizations. TST is a socially and politically active organization that fashions events that are “designed to preserve and advance secularism and individual liberties.”

And that’s where the film begins, with the temple’s inaugural rally (if you consider a half-dozen devotees a rally) of support for Florida Governor Rick Scott (then pushing for prayer in public school). Someone in the crowd yells to the leader, “Go to Hell,” which brings up the first of many comic retorts. The group’s spokesperson quickly responds, “I believe in it, and I’m very excited about it.” The press, eager to reveal the “truth,” think the whole thing is a hoax. Some of the original founders (in shadow to hide their features, although their noms-de-guerre are displayed as captions) do confirm it all was a stunt – the first of many that highlight the film. But, then it got real and co-founder “Lucien Greaves” reluctantly comes center stage for the group, suddenly and seriously.

Television journalists can’t seem to take this faction’s efforts seriously. Case in point: up against lightweight Megyn Kelly, wearing a confused smile, on Fox News, Greaves holds his own by commenting how TST provides “a need for a counterbalance against the dominant religious privilege in America today.”

The group’s growth is chronicled as new chapters come aboard and the national headquarters are set (naturally) in Salem. Roundtable discussions and stand alone moments offer up refreshing reasons for very divergent (and very reasonable) folks getting involved in the movement. The emphasis of the film is to shine light on the Satanists’ efforts to find religious pluralism in a Christian nation. The sad part is that the conservative religious right sees it as their duty to not separate church and state. TST is fighting back at that notion.

While the skits the group write seem like high school hijinks, they are anything but. They draw attention to the hypocrisy that surrounds the supposed separation of church and state. And that state is Oklahoma (and later, Arkansas), where the Satanists want to place a bronze statue of Baphomet on the state capitol grounds, next to a Ten Commandments monument. If it’s good enough for the Catholic Church, it should be good enough for any church. And, thankfully for the makers of this film, that allows for a lot of interesting news stories and often pointed on-air debates about allowing religion into the government sphere. When the Sooner State’s Supreme Court rules to remove the Ten Commandment marker (surprisingly modeled after a version shipped by Paramount Pictures in the 1950s to promote it’s eponymous bible movie), it’s a victory for logic. And TST. 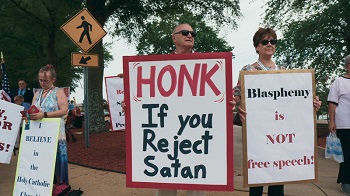 It’s not all fun and games. There are death threats. There are shots of very stupid people stating that the satanic assembly is a hate group. I suspect these are the misguided folks that helped elect our current president. They are certainly the same hate-filled masses that appear in the school meeting scene in Field of Dreams suggesting the banning of a classic novel by a pacifist. There’s also commentary about the silly, Catholic supported “Satanic panic” over the game Dungeons & Dragons and how heavy metal music caused devil worship. No concern over the 300-plus Catholic priests who have abused over a thousand children since 1947.

Hail Satan? is a terrific history lesson that dissects how the fantasies of the religious right have been created and ingrained in our society. The film exposes the little minds that thwart this country’s right to the separation of church and state. Take away the horns, colored contact lenses, tinted haired, and wardrobe, and TST is a group that promotes a progressive view. Their chapters collect socks for the homeless, clean up stretches of highway (with pitch forks), do blood drives (with needles), and provide other socially correct services for the community.

Hail Satan? offers up various Christian boogeymen who have been pushing their own theocracy on our government. This radical film is a credible and thoughtful public service announcement that provides a glimpse into how TST is fighting back. It’s a great step forward to understanding something that has been misunderstood for far too long.