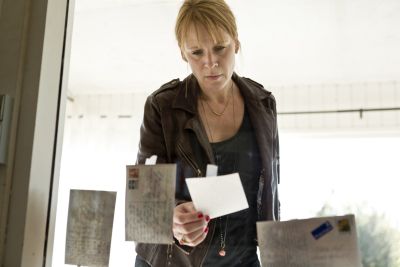 There is an ironic thread connecting the childhood of Danish actress Iben Hjejle to her adult self. Describing herself as having an obsession with death as a child, she now finds herself cast in the lead role in a crime series caught in death’s shadow.

Prior to Dicte – Crime Reporter (2012- ), Iben was one of the main cast in the Danish sitcom Klown (2005-2009), which was adapted into the feature film of the same name in 2010 by its writer/stars Frank Hvam and Casper Christensen, along side director Mikkel Nørgaard. But to English speaking audiences Hjejle is most well known for starring opposite John Cusack in Stephen Frears’ High Fidelity (2000), and opposite Daniel Craig in Edward Zwick’s World War II drama Defiance (2008).

In conversation with Film International, Hjejle reflected on her changing perspective of performance, and the place of instinct not only within performance, but also as an integral part of the actor’s identity. She also discussed how her experience of playing journalist Dicte Svendsen has revealed truths that have since reshaped her perspective, while in hindsight she has come to value comedy as a means for preparation.

Why a career acting? Was there an inspirational or defining moment?

I think in my case there wasn’t really much else to do, and also if you asked my parents they would say the same [laughs]. I was just sort of a late bloomer because I just kept imagining, and I have always lived as a child in a fantasy world. And so I think my parents looked at each other and looked at me and said: “That’s probably the path that she’s going to take.” Also they put me in private school, and in Denmark private schools are often creatively orientated. So I may have not always known that I was going to be an actor, but I’ve always acted. It wasn’t until when I was about eighteen or nineteen years old that somebody told me I should try applying to Danish theatre schools, and so I did.

Over the course of your career how have the various characters changed your perspective of performance?

If we refer to where I am today with Dicte and everything, then obviously there are things that you can do when you are younger that you can’t do when you are older. I’m forty-five now and there were characters and wonderful plays I was in that I wouldn’t be able to do now, just because of age. And there are things now that I could never have done as a twenty-five year old because you have no experience in life. So I feel very privileged that I have had the chance to play characters that were actually fitting for my age, and my capacity to do so in those different moments. I also feel very privileged having landed a character like Dicte, a title role in a series because it is not often that this happens for actors at the beginning to their mid-forties.

I’ve spoken with actors that have explained that even if you are playing a character far removed from yourself, you have to use your own life experiences to create a connection.

Exactly, and I guess you would always try to find something, even though you are playing a character that’s so far from yourself and your own life experiences. You would still try to find something that could be compared to your own life, and no matter what we’ve been through or what sort of experiences we have had ourselves, all human beings in the world have the same emotional register. It’s just a question of how it has been developed or which sides of it have you had the chance to develop. So it’s a question of diving into yourself and seeing what can you find in there to portray these different characters – what can you use from yourself. And that’s what I try to do.

Having spoken with filmmakers on the subject of honing one’s instincts within the filmmaking process, I’d be interested to hear your thoughts on the place of instinct within the mode of performance?

I would say that it’s everything, and actually the people that end up becoming actors and actresses at a very early age have maybe honed that instinct. I think it’s what we are capable of because we have that very, very highly developed instinct where we see things differently. I was one of those children with an almost gothic obsession of death. I always had my mother reading Grimm Fairy Tales to me because they were more evil than Hans Christian Andersen. So I just loved drama, which was such a big part of me. I loved going to churchyards and looking at the gravestones to see when people died and how old they were. So there was a big instinct for drama in my life since I was very young, and I think that actors and actresses very much from the beginning maybe have a little bit of a different view of the world.

To bring the conversation around to Dicte – Crime Reporter, what was the appeal of both the character and the story? 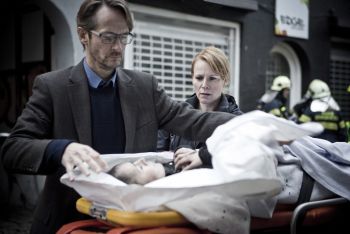 I thought it was wonderful that it had that combination because for quite some time we’ve had the new wave of Scandinavian crime – I believe you call it Scandi Noir. Reading the first script and the first season of Dicte, I think what I really enjoyed was how that Scandi Noir feeling was combined with a very light relationship drama. In some episodes it is almost bordering on comedy on top of the crime element, which is the driving force in the first season at least. So I found it very interesting how the stories of the episodes were a combination of that – how Dicte would deal with her daughter, friends, boyfriend, the other stories, and whether she was going to find her long lost baby boy that she had to adopt away when he was born? So it was that combination that I found very appealing.

Each story in the series is told over two forty-five minute episodes. A number of recent crime series’ seem to be moving away from the classic approach to a a single case occupying the entirety of  a single season. I imagine the approach of Dicte must have served you as an actress, wherein the change of cases helped to access the layers of the character with greater flexibility?

It’s a more classic way of telling the stories, but I don’t know because both are interesting. We hadn’t seen that much classical crime telling like Dicte in a long time. I believe most of the crime series that have come out of Scandinavia for let’s say the last five or six years have been one long story or case. I don’t know, I’ve never worked on any of the series and I really wouldn’t know the difference. I can perhaps try to compare it to when you do a play, and you have to reproduce yourself every single evening in that one long story, and the character develops during the course of the play. Working with Dicte in that type of production I’ve had to learn to work very fast because we don’t have much time or money, and it’s always like that on TV production in this country at least. I’ve actually had the pleasure, the privilege of being able to draw on some experiences that I’ve had from doing a lot of comedy, which sounds strange when you are doing a crime series. It’s like the quick changes that you have to make in your character, where one moment you are in a romantic situation with your boyfriend, and the next someone is threatening your child. It’s all about being prepared and I’ve had so much training from doing lots of comedy, and so it has just come to my aid in those situations.

As the experience of the series motivated a contemplation of the role of the journalist/reporter or the media in reporting crime stories, especially on the issue of privacy and discretion? I ask because this can be in conflict with investigators and the legal system where the media has to balance its obligations.

The only thing I couldn’t get my head around for this part was being a journalist, and for a week or so I went to work with a crime reporter for one of the few papers in Denmark that still published in print. She was working on the Anders Breivik trial at that time up in Oslo, Norway. She of course spoke with a lot of the parents of the poor children, and what was so interesting in that period was that she said: It’s wonderful how people like that always want to talk to the press. How they want to let the world know about the horrible feelings of revenge and those other feelings that you of course live through when someone takes the life of your child, but it’s not worth it. They all said: We’ve got to show the world that the only way is love, to show people love, respect and understanding, so that society will not produce any more of these horrible, horrible people. And that was completely new to me, that people in a situation like that would want to talk to the press. And it’s the same thing with criminals who have done horrible things. They would much rather talk to a journalist because they get to explain themselves in a different kind of way than they would to the police or in the courtroom. So that was very interesting. I think we tried to incorporate the elements of people – both the victims and the criminals – as to how you would be able to lure them into talking to you because you’d promise them protection and that they could stay anonymous. So that was a very interesting element and I learned something new.

German filmmaker Christoph Behl remarked to me: “You are evolving, and after the film you are not the same person as you were before.” Do you perceive there to be a transformative aspect to the creative process?

Very much so because I have lived with this character for five and a half years. We did three seasons and about the Dicte character I always say that she’s developed into something that’s like a older, smarter, braver sister to me. I just love having lived with this character for so long and she has taught me to at least try and become a braver person. And so yes, this has very much had an affect on me, and changed my views on different things. So I am very grateful.

Dicte – Crime Reporter, Season One is now available in the UK on DVD courtesy of RLJ Entertainment’s Acorn Label. Season Two will be available later this year, while the commission of a third season has been confirmed.

Paul Risker is an independent scholar and film critic who contributes regularly to Film International. He is an Editor for Mise-en-scène: The Journal of Film and Visual Narration, which will launch in Fall 2016.