Baby Driver: With Films Like This, Who Needs Drugs? 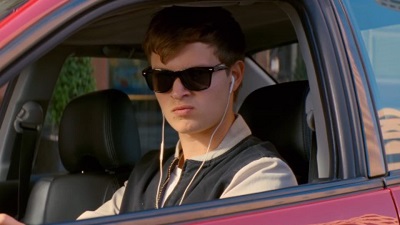 With an intensely supercharged soundtrack driving the frantic editing in this way-cool heist flick, there isn’t much fat left to gnaw off the bones by the time the action hits the curb in the final act. Wright is the British writer-director behind the gag-laden Three Flavours Cornetto trilogy of Shaun of the Dead (2004), hilariously putting the zom in the rom-com; Hot Fuzz (2007), another sampling of dry British wit meshed with a whacky, backwater action; and The World’s End (2013), in which a pub crawl begets an apocalyptic conspiracy. He was also responsible for the sadly underrated Scott Pilgrim vs. the World (2010), an insanely demented superpower comedy. Maybe you don’t always recall the songs Wright uses in his films, but there’s always an intense cadence that drives the editing, again handled by Wright regulars Paul Machliss and Jonathan Amos. They’ve put on racing gloves to put a song beat to every moving part (cars, guns, people walking and running) in their new assignment.

In Baby Driver, which elevates the heist film genre to incredibly entertaining new heights, Wright pushes the music to the forefront, using (mostly) classic iPod (i.e, the one with the wheel on the front) technology pumped into the head of a young getaway driver named Baby Driver. Ansel Elgort (The Fault in Our Stars and the Divergent trilogy), a mostly silent observer of the world around him, is a golden-hearted introvert with one amazing, titular talent. To pay off a debt to stone-faced mobster Doc (Kevin Spacey, in a role not too distant from his Frank Underwood on House of Cards), Baby is connected with a rotating group of eccentric and sadistic thugs – you spot them in various shapes and sizes in all of Wright’s movies – to enable eluding authorities following a series of robberies. Carnage is delivered in ample R-rated portions.

When not trying to avoid the gaze of the various bad-ass critters that make up the freelance, over-the-top gangster troupe, or the folks who might end up as poetic roadkill along his route, Baby sidesteps the antics of tough guy Griff Jon (The Walking Dead, Daredevil) Bernthal; the hard-boiled, drug-addled Buddy (Jon Hamm, reveling in take-no-prisoners nastiness); his crazed gf Darling (the shapely Eiza Gonzales); the grudge-fueled Bats (Jamie Foxx); and Flea (played by Lanny Joon, the bassist for The Red Hot Chili Peppers).

From the get go, Wright straps you in for a vroom-vroom-vroom ride-of-your-life. Astonishingly choreographed (as most of the film is), Baby Face has the audience immediately siding with the boyish Baby, armed only with sunglasses (numerous pairs) and earphones (which help insulate his mental state from the other psychos in the passenger and rear seats) and an incredible driving sense. In case you think this thrill ride might become a bit oversaturated with so much stunt work and camera movement, the script has been adequately sprinkled with well sculpted one-liners and darkly comic moments, including one involving Mike (vs. Michael) Myers Halloween masks. There also a nice romantic subplot between Baby and Debora (Lily James), a sweet diner waitress. 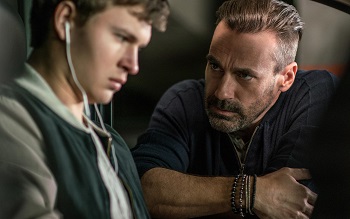 Not to harp too much on the great camera work by director of photography Bill Pope and his crew, but there was one scene that was just jaw-dropping, and it didn’t involve a single car (well, not one Baby was driving). In the lead-up to the meet-up of Baby and Debora early in the film, there is a bravura single-shot sequence as Baby, on an errand for barista blended coffee while listening to Harlem Shuffle by Bob and Earl, prances along the streets of Atlanta, the camera and character dancing about one another. That’s a scene breakdown I’d love to see.

In the subterfuge by Doc that brings Baby back along for one more drive, those that are close to Baby (well, there’s really only two people – Debora and Baby’s elderly deaf foster dad, Joseph) suffer in his race to freedom, hoping to cut the strings Doc is using to control the boy.

The soundtrack, with 30 (count ’em!) tracks, is on iTunes and you can watch the Chase Me music video by Danger Mouse featuring Run The Jewels and Big Boi here. The only song I thought would have been nice to have in the film is Steppenwolf’s Magic Carpet Ride. “I like to dream yes, yes, right between my sound machine. On a cloud of sound I drift in the night. Any place it goes is right. Goes far, flies near, to the stars away from here.”

A very minor oversight. Baby Driver pushes the pedal beyond the metal.

Elias Savada is a movie copyright researcher, critic, craft beer geek, and avid genealogist based in Bethesda, Maryland. He helps program the Spooky Movie International Movie Film Festival, and previously reviewed for Film Threat and Nitrate Online. He served as an executive producer on the 2015 horror film German Angst, Penny Lane’s award-winning documentary Nuts!, and the forthcoming supernatural thriller Ayla. He co-authored, with David J. Skal, Dark Carnival: the Secret World of Tod Browning (the revised edition will be published in 2017 by Centipede Press).