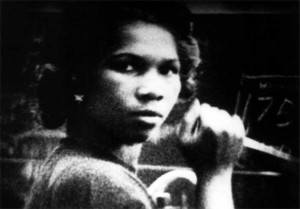 “If the young are not initiated into the village, they will burn it down just to feel its warmth.”

The recent urban unrest that shook the already shaky scaffoldings of English society – sugar-coated with viral advertising yet hardly reassuring – recurs at a significant time in film history: the 25th anniversary of Handsworth Songs by the Black Audio Film Collective. To watch again this remarkable piece of art today should not only be occasioned by its 25th birthday but also by the resurgence of unearthed supremacist feelings thought lost in the glare of consumer multiculturalism.

In fact, among the many effects the riots are having on the oldest parliamentary democracy in the world is the renowned racist need to demonstrate the superiority of English values culminating in the televised appearance of historian David Starkey on BBC Newsnight. Far from being the isolated remark of some rightwing lunatic, Professor Starkey’s position – exemplified in his “axiomatic” “the whites have become black” – represents a widely held, though accurately diluted view, which made its public reappearance with “the broom-wielding bourgeoisie of Clapham as they amassed for a bit of symbolic social cleansing” as Dr. Sofia Himmelblau puts it. Among medieval punishments for the rioters – six months imprisonment for having stolen two bottles of water to Nicholas Robinson while Perry Sutcliffe-Keenan was jailed for four years at Chester crown court for using Facebook to incite disorder, even though his actions did not cause rioting – eviction from council housing with the exclusive consultancy from “zero tolerance” super cop Bill Bratton from Los Angeles USA (of which England is the darling and obedient colony), her majesty’s kingdom seems busy bleaching the black stain of the riots.

Swept aside: “real Londoners” and BAFC

ck thirty years and the land of Hope & Glory is already ablaze. A collective of young undergraduate students is experimenting with the colonial images projected by society on the usual wall of silence and fear.

BAFC’s Afrodiasporic cineaesthetics affirmed a new subjectivity outside the ruling narrative, though opposing stereotypes they did not beg for recognition or acceptance, they took without asking the right to self-representation. Handsworth Songs entailed a process of specular enquiry fluctuating between textual analysis and historical delineation; the Signs of Empire were deconstructed. The revealing violence of the riots in Handsworth and the media circus around it was the occasion for a semiotic autopsy of the English carcass, embarrassed at having a (anti-)colonial war brought back home by a democratically deported labour force. Buried under the rubbles of post-industrial Britain the zombies of social unrest came out in forces on the streets of Handsworth terrorizing the cosy teapot of English hypocrisy.

A material ghost animated the afro-decentred struggle against what collective member Edward George called “the violent nonsensicality of race”, listening to the echoes of history they heard the intersecting lines of a complex unfolding story.

BAFC’s role as producers was not limited to images but aimed at the creation of an infrastructure (journals, seminars, film familiarisation courses, workshops, debates) not serving the community but articulating a coming one, voicing a potential rather than representing a branded minority.

The polysemic nature of Handsworth Songs undermined “the semantic closure to which realism often tend”; instead of battling the BBC on its favourite field BAFC opened another front catching off guard the strategists of pluralism. [1]

The scattered soundscape of the dub (in)version of Jerusalem by Mark Stewart (the Anglican hymn written in the 19th century by William Blake is about the bygone pastoral utopia of a pre-industrial England) gatecrashes the diegetic realm of the film during the slideshow of newspapers headlines, limning Handsworth as “the bleeding heart of England”. Here the song ceases to merely soundtrack the images to become a signifying frontrunner blanking out the demarcation line between content and form, poetics and aesthetics. This sequence represents in Handsworth Songs one of the most representative moments of the film and of BAFC practice, it problematizes the industrial influence on the social texture of England and with its cinematic self-consciousness demonstrates a conception of representation not as mimetic correspondence with the “real” but as a process of selection, combination, and articulation of signifying elements in sound and image.[2]

A Laughter Will Bury You All

Due to its deconstructed melody and rhythmic structure, Stewart’s version of Jerusalem simultaneously ratifies and reclaims [3] the failure of British society – that after having promised a new Jerusalem of hope & glory is now afraid of being swamped by its exploited workmanship – precariously standing at a socio-cultural crossroad. On the one side is the (il)liberal dream of a ‘tolerant’ England willing to accept a small minority and on the other, the insurgence of cross-pollinating experiences antagonistically forging a post-imperial language. Imperial past reverberates through the mix as the new form emerges, intermittently piercing the original text with convulsing shouts and breaks…the bass line guiding the melodic march towards a re-imagined place, simultaneously moving and being constrained.

The film highest achievement is in having managed to unhinge the rhetoric of civil disorder, to have refused the dichotomy condemning vs. absolving and having opted for the enlightening practice of comprehending. The riots are thus seen as a historical consequence rather than a senseless act of violence, as the epidemic rant of the underclass exiting the norm to flare up their multiple versions of the (hi)story.

Forward to 2011 and merry old England is burning down, again. This time outside the asphyxiating “public debate” balancing its pathetic act between outright fascism and pseudo-humanist calls for togetherness and understanding, there is no subversive self-entitlement. The so-called left asks the government to investigate the social causes of the riots (as if they were not clear enough!), urban artists tweet along the lines of governmental assistance for “the kids they grew up with”. NO ONE, denounces the intrinsic relation between the free market and violence, financial looting and poverty, a feudal class system and an abysmal cultural divide. Radical theorists are suddenly unable (afraid?) to offer valid analyses of what is happening, with the sole voices of critical dissent approaching retirement age (Tariq Ali, Darcus Howe). The hegemonic voice of British democracy has pre-emptively exhausted the scream of the burning neighbourhoods that to theses days remain voiceless.

The exciting art scene of the English capital stares from its lofty void at a situation in which it has no role, the commodity-spectacle has colonised the whole of society…only the “feral underclass” is left out:

Like the young delinquents of all the advanced countries, but more radically because they are part of a class without a future, a sector of the proletariat unable to believe in any significant chance of integration or promotion, the Los Angeles blacks take modern capitalist propaganda, its publicity of abundance, literally. They want to possess now all the objects shown and abstractly accessible, because they want to use them. In this way they are challenging their exchange-value, the commodity reality which molds them and marshals them to its own ends, and which has preselected everything. Through theft and gift they rediscover a use that immediately refutes the oppressive rationality of the commodity, revealing its relations and even its production to be arbitrary and unnecessary. The looting of the Watts district was the most direct realization of the distorted principle: “To each according to their false needs” — needs determined and produced by the economic system which the very act of looting rejects. But once the vaunted abundance is taken at face value and directly seized, instead of being eternally pursued in the rat-race of alienated labor and increasing unmet social needs, real desires begin to be expressed in festive celebration, in playful self-assertion, in the potlatch of destruction. People who destroy commodities show their human superiority over commodities. They stop submitting to the arbitrary forms that distortedly reflect their real needs.

Now that the third generation of expendable immigrant workforce has ushered a new cycle of consuming unemployment we shall wait for those ‘dream raiders’ from BAFC’s Memory Room 451 to body-snatch them and sell their dreams to ‘TV 3000’. From the graveyard of time where time-travelling is nothing but another form of exploitation the undead have reclaimed the streets, the creative class is barricaded in its ivory tower of past-time, the cognitariat feels more trapped than ever.

“The tradition of the oppressed teaches us that the ‘state of emergency’ in which we live is not the exception but the rule” said Walter Benjamin as the police raids council estates looking for looters to evict…Rotherham MP Denis MacShane who accurately remarked, “What the looters wanted was for a few minutes to enter the world of Sloane Street consumption.” claimed £5,900 for eight laptops. Of course, as an MP he obtained these laptops legally through his expenses. (Source: The Daily Telegraph).

The fumes of the riots still waft uneasy upon the mass-mediated debris of this “advanced civilization”…on its ashes we can count.

[3] John Akomfrah suggested to reformulate the filmic agenda, in which the strategy simultaneously undermines and inaugurates a new black cinema, in Reece Auguiste, ‘Handsworth Songs, some background notes’, in Framework no. 35, January 1988.

This article is protected at the request of the author under the Creative Commons Attribution-Noncommercial 3.0 United States licence.