Captain America: The Winter Soldier, or, Nothing You Believe is True

I’m teaching a class right now in comic book movies, partly to trace the history of the genre from the 1940s on – when they began as Saturday morning serials – and partly to discover, if I could, why these films have moved to the mainstream of cinematic discourse. There’s no question about it anymore; Comic-Con rules the multiplex, and for the most part, I’ve avoided these films like the plague.

I remember sitting through Christopher Nolan’s interminable and interminably boring Inception (2010) impatiently looking at my watch throughout the film; there was nothing in it even remotely original, and plenty that had been “borrowed” from Cocteau, Resnais, and others, and at the center, it really wasn’t about anything.

But at least the emptiness of that film was less offensive than the straight out class warfare of Nolan’s The Dark Knight Rises (2012), which Daniel Lindvall effectively eviscerated in the pages of Film International. And yet from the Iron Man films to Matthew Vaughn’s X-Men: First Class (2011), emptiness, coupled with over-the-top violence, is all that’s on display.

Here, we have something different. Directed by Anthony and Joe Russo, from a script by Christopher Markus and Stephen McFeely, Captain America: The Winter Soldier takes on the CIA, hypersurveillance systems, killer drones, and the Snowden affair, and comes down on the side of the average citizen for a change, rather than the ruling elite.

The special effects are absolutely non-stop, the violence is ramped up to hyperkinetic levels, with cutting to match, and the performances are all cardboard, but at the center of the film, giving one of his most effective performances in years, is none other than Robert Redford, who’s never done a comic book film before, superbly playing the villain of the piece.

Redford, of course, leans to the left with all of his film work, but too often, his films, or films that he supervises or champions through his Sundance Film operation, push much too hard to be effective, and are designed for consumption by smaller audiences. Here’s a big budget movie, in contrast, $170 million big, in which Redford’s participation will do more to advance his political beliefs than any directly agitprop film might do.

The plot is both simple and complex: Alexander Pierce (Redford), a senior official of the fictional law and order organization S.H.I.E.L.D., is in reality a double agent for Hydra, a Nazi-era originated plot for world domination, once under the direction of an arch criminal known as The Red Skull.

In Joe Johnston’s Captain America: The First Avenger (2011), part of the whole series of films that comprise the so-called “Marvel universe” – think of a low rent version of Wagner’s The Ring Cycle, and you’ve pretty much got it – Nazi super villain Johann Schmidt aka Red Skull (Hugo Weaving) and his scientist sidekick, Arnim Zola (Toby Jones), plan to take over the world – what, again? – with a fantastic device powered by a mysterious energy source.

The superhuman Captain America, Steve Rogers (played by Chris Evans in both that film, and the current offering) puts a stop to their plans, but is literally thrown into the deep freeze for his troubles, only to be thawed out some 50 years later to join The Avengers (no relation, sadly, to the Patrick Macnee/Diana Rigg teleseries) in their eternal fight against “the forces of evil.”

Johnston’s film, resolutely set in the 1940s, is a hyper stylized World War II buddy film, and despite the trappings never seems more than an exercise in style. Only the always reliable Stanley Tucci, in a small part as a scientist, Dr. Abraham Erskine, who has escaped from Hitler’s Germany, and develops the serum that turns Steve Rogers into a living superman, stands out in the film. When he dies in the first 30 minutes, all interest vanishes with him. In short, it might as well be a James Bond film, or any other diagrammatic superhero movie; there’s nothing going on but the rent.

In Captain America: The Winter Soldier, however, Pierce is intent on carrying out Hydra’s mission of world domination through the use of a group of killer surveillance drones, which will target and assassinate some 10,000,000 “troublemakers” around the globe, all in the name of preserving peace. At the same time, he has compiled a master database on the world’s entire population to identify these miscreants, which becomes another major theme of the film; data mining. In this, Pierce is guided by the computer-preserved consciousness of Nazi scientist Arnim Zola, who “lives on” in an underground bunker on antiquated computer equipment.

Zola, it seems, was one of the Nazis recruited by the United States at the end of World War II to make use of their abilities to create new weapons of war for the Allies. This, of course, really happened, in the infamous “Operation Paperclip”, which whitewashed top Nazi scientists if they proved willing to cooperate with the United States military. But in Captain America: The Winter Soldier, this plan has gone awry; Pierce and his minions have co-opted the US government itself from the inside out, and it’s rotten to the core as a result.

Cap, as Captain America is continually referred to, and his allies Natasha Romanoff, aka Black Widow (Scarlett Johansson), Sam Wilson, aka Falcon (Anthony Mackie), and the irascible Nick Fury (Samuel L. Jackson, devouring his role with customary relish), set out to foil Pierce’s plot, and naturally, they do so, but not before an intricate series of double-crosses, endless fist fights, secret plots, explosions and unremitting gunfire have advanced the narrative.

As action filmmaking, this is absolutely state of the art. It’s also curiously bloodless, in keeping with the PG-13 rating that the film adheres to, but still delivers plenty of punch for audiences in search of nothing more than thrills. If William Witney, who directed the best Republic serials during the Golden Era of the 1940s were still alive, he’d be making films like this; non-stop action, but unlike Witney’s straight ahead style, Captain America: The Winter Soldier has a genuine subtext.

Redford signed on because he was reportedly curious as to why comic book movies have taken such a hold on the public’s consciousness, and delivers such a smoothly effective performance that he slips effortlessly into the mix, giving a deftly understated portrait of high-echelon villainy. And though the film seemingly celebrates the military industrial complex in its opening sequences, complete with a trip to the Smithsonian Institution for a view of past military glory, it soon strips this away to reveal its true intent.

The film’s message is simple, and simply stated, over and over again, by one character after another: “trust no one.” In this film, that includes the government, law enforcement officials, the CIA, the FBI, senators, congressmen – comedian Garry Shandling has a nice cameo as Senator Stern, a corrupt government official working undercover for Hydra – in short, any figure of authority. 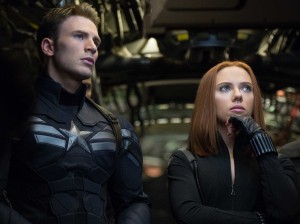 And none of this is an accident; it’s all intentional. As Anthony Russo, co-director of the film told interviewer Frank Lovece,

“it’s hard to make a political film that’s not topical. That’s what makes a political thriller different from just a thriller. And that’s what adds to the characters’ paranoia and the audience’s experience of that paranoia. But we’re also very pop-culture-obsessed and we love topicality, so we kept pushing to [have] scenes that, fortunately or unfortunately, played out [during the time that Edward] Snowden outed the NSA. That stuff was already in the zeitgeist. We were all reading the articles that were coming out questioning drone strikes, pre-emptive strikes, civil liberties – [Barack] Obama talking about who they would kill […] We wanted to put all of that into the film because it would be a contrast to [Captain America]’s greatest-generation [way of thinking].”

In World War II, the stakes were pretty clear, and Joe Johnston’s original Captain America outing reflected this, designed as a retro tribute to 1940s hyper patriotism, reflecting the all out war effort against the Nazi juggernaut. Now, the problem has become more interiorized. Thanks to the efforts of Pierce and his minions, S.H.I.E.L.D has been infiltrated by the agents of Hydra to the point where it’s been completely compromised as a law enforcement agency, and the only solution, effected in the final minutes of film, is to destroy S.H.I.E.L.D itself in order to ensure Hydra’s elimination. 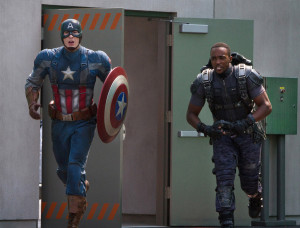 There are desultory, throwaway scenes tacked on at the very end to show that government law enforcement agencies are rebuilding, and that there are still some good people left, but that’s really a sop to the censors. And of course, there’s the inevitable and tiresome Stan Lee cameo, this time as a security guard at the Smithsonian. And there are a lot of lame jokes, enough bromance to make Judd Apatow blush, and plenty of equal-opportunity violence to make sure that the average viewer is satisfied. Yet Captain America: The Winter Soldier isn’t a “comfort” film – it exists in a world of perpetual paranoia, where only violence helps because only violence rules, and one must be perpetually distrustful of even one’s closest allies.

There are numerous subplots I’ve left out here, but they don’t really matter; I also haven’t discussed the truly extraordinary action directing that the Russos pull off, with a cut roughly every three seconds, if that, and a universe comprised almost entirely of CGI effects that create an oversize world that dwarfs all human concerns. I’d never heard of these two guys before, quite frankly, but with this film, they step up to the front rank of action directors; if they can keep making films like this, with popular appeal and genuine content, then they’ve got my vote.

As for the actors, Scarlett Johansson, who is everywhere these days, hits her marks and says her lines with professional aplomb, while Chris Evans is suitably straight arrow as Captain America, but it’s Redford who gives the film a real center – it’s sort of an updated version of Alan J. Pakula’s All The President’s Men (1976) rendered in broad strokes, using that most potent of genre weapons – get them into the theatre with the promise of pure escapist entertainment, and then slip in some genuine content, just as Roger Corman did with his best films in the 1960s.

As producer Kevin Feige told Joseph McCabe, “we really want[ed] to make a ’70s political thriller masquerading as a big superhero movie,” and that’s exactly what they’ve done. Subtle it isn’t. Loud and violent, yes. But at the center of the film is a populist if paranoid message that resonates long after the last frame has faded from the screen – nothing you believe is true. Trust no one.

9 thoughts on “Captain America: The Winter Soldier, or, Nothing You Believe is True”