The Liverpool Radical Film Festival ran from the 13th–16th November. As part of an emerging UK wide Radical Film Network the festival makes its contribution towards regaining access to the city through the creation of spaces in which explicitly left-wing radical film catalyses the emergence of political consciousness. It would not be possible to hold a non-profit festival of this nature without solidarity among sympathetic organisations that otherwise might have no interest in film. The festival therefore creates cinemas out of spaces that otherwise wouldn’t be. In the main it was held in The Well, situated in a back alley on Liverpool’s Roscoe Street. Operating predominantly as a bicycle workshop, one of the drives of its inhabitants is to simply retain the space. Any threat of closure is abated to some degree through mutual co-operation with organisations like the Liverpool Radical Film Festival, and, in this case, the drawing of an audience hungry for the political avant-garde.

The motive of retaining space was the inspiration behind the first screening of the festival, The Film That Buys The Cinema (The Cube, 2013, UK) a film created as part of a fundraising project by The Cube, Bristol, a non-profit cinema run for the past two decades by unpaid volunteers. Consisting of 70 one-minute filmic contributions from its affiliates, the film’s purpose is to help raise £185,000 in order to keep The Cube open. Their success has influenced a similar project in Liverpool that seeks to turn derelict offices into filmic exhibition space, “small cinema.” The post film discussion among the audience focused on making this new project work.

Friday night’s screenings coincided with Critical Mass, a bike riding protest around the city that takes place once a month. A series of short films that ran from local contributions to Mark Karlin’s Between Times (1993) also incorporated films that focus on the radical elements of cycling. This was followed by a social/networking event with food and drinks served by the festival. In the tradition of holding screenings in a variety of cultural and community venues, Saturday saw the festival branch out into two separate events at different locations. Cultures of Resistance (Lee, 2010, USA), a film that questions the uses and values of different forms of resistance to neo-liberalism in its various guises, was screened in the basement of Liverpool’s radical bookshop News From Nowhere.

Meanwhile a session on the battle for northern Syria saw a screening of The Silent Revolution (Meseguer, Garcia, 2013, Syria) followed by a discussion led by Kurdish activists Sema Yildiz and Berivan Naz. Focusing on the autonomous state being carved out by Kurdish fighters around the areas of Kobanî and Rojava (Western Kurdistan), they spoke about the emergence of democratic confederalism in the area and the misrepresentation of events in the mainstream media. As Sema pointed out “it’s not in the media because they don’t want you to know that there’s a stateless, ecological, gender equal, working alternative to this system. But there is, and it’s working in Rojava.”

Although the festival moved around the city to include a number of venues, its main venue, The Well, hosted an ongoing installation consisting of films by Maya Deren, whose life as a political activist and avant-garde filmmaker seemed apt for display at a festival that seeks to bridge the political and aesthetic avant-garde. On Sunday a group assembled in the space for a discussion on the installation. At the same time a child-friendly “mini-cinema” event saw Sita Sings the Blues (Paley, 2010, USA), a film released under a creative commons license so that it can be edited, copied and shared according to varied requirements, screened at Frederick’s Pillbox Cinema on Hope Street. 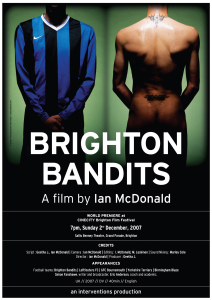 On early Sunday evening the festival returned to The Well for what was felt to be a much-needed session on homosexuality in football. Two films from director, Ian McDonald, Brighton Bandits (2007) and Justin (2011) highlighted the amount of progress that has been made on the issue of gay rights over the past fifteen years, resulting, to a large extent, from the activities of the gay football community.

The last session of the festival comprised a range of short films whose common purpose was the portrayal of victorious campaigns carried out by those in the fight back against austerity and global neo-liberalism. These were predominantly films made by non-professional filmmakers and/or activist groups. A positive evaluation of the Oakland California occupy movement was paired with a film about the recent victory of the Brighton, UK, hospitality workers union over bosses who refuse to pay a fair wage. Afterwards Shaun Dey of Reel News, the longest running radical newsreel in British history introduced two recent films, including Uprising in Burgos (Alekos, Spain, 2014), about how an astonishing uprising stopped the building of a luxury shopping mall in a working class district in Spain.

Closing in proper dialogical style, an audience discussion heralded the end of a well-attended and encouraging festival. One audience member, a worker in a pop-up bakery, pointed out how multifaceted resistance had become over the last few years (maybe it always has been), citing her own workplace as an example. How, she asked, had even the act of baking become infused with a political purpose? As Cuban filmmaker Jose Garcia Espinosa once said: “art will not disappear into everything, it will disappear into nothing.”

The Liverpool Radical Film Festival continues to run radical film events all over Merseyside throughout the year. For more information visit our site.