Seed Money evokes the era of sexual liberation, which was at its most heady in San Francisco, where Falcon Studios was located. Today, gay men often see porn as one-off clips on the Internet, but in his day, Holmes fostered a full-fledged studio that had a cohesive aesthetic. His actors could be seen out and about in the bars and clubs, and the Falcon look fanned out organically from the soundstage throughout the Castro. There was a time when any gay man could be shown the image of an adult model and know right away if he was a Falcon Man.  Stabile sets the tone for the era with rich archival footage of gay life from the 70s and beyond, not just the now-somewhat-comical early Falcon films with their corny dialog.

The Falcon man of the 80s perfectly captured the new era. Holmes had his models shaved smooth, with neatly styled hair. Chuck even used to demand that the bottom of the models’ feet had to be scrubbed clean — they were in the air enough during shooting. He also moved the action from places that seemed dangerous to far more glamorous locales: ski lodges, tennis clubs and palatial homes. In moving gay male fantasy into more upscale surroundings, Holmes widened the scope of gay fantasies. No longer were our porn fantasies confined to straight street trade looking to make a quick buck. The Falcon male was self-assured, led a glamorous life, and enjoyed male partners who desired him, too. It was the perfect companion to an era of Reagan and Dynasty. By moving gay sex into a glam locale, he made gay sex less dirty but perhaps less interesting.

Holmes appeared indifferent to AIDS until he himself and those around him became afflicted. His philanthropy was a sort of final-act conversion, perhaps with an eye towards securing his place in the gay community. But that late arrival doesn’t mean he didn’t help. Chuck Holmes was one of the most generous philanthropists in the gay community, due to the fortune he amassed selling men their fantasies. Some recipients of his largesse felt uncomfortable with where the money was coming from. “Many powerbrokers in the gay community were happy to get their share of Chuck’s money, but they never wanted to disclose where it came from,” Stabile says. Holmes’ millions went to groups like the HRC and the AIDS Memorial Grove, as well as politicians such as Bill Clinton, but it had to be downplayed for fear of the charge of accepting “dirty money.”

This contributed to Holmes’ ongoing sense of exclusion. “Even today, some of the icons of the gay rights movement have issues with gay pornography and view it as dirty. Many would only speak with me off camera,” Stabile reveals. “Even in liberal San Francisco, after Chuck passed away and left money for the Gay and Lesbian Center, many in the community were willing to take his money but wanted to distance themselves from Chuck.” The in-your-face gay male sexuality or male erotica did not fit neatly into the “virtually normal” narrative that mainstream gay rights organizations want to use to secure corporate sponsorships and White House access. But Holmes’ centrality to the gay community (and by extension, porn) is hard to deny when it was his money which allowed these groups to be founded. 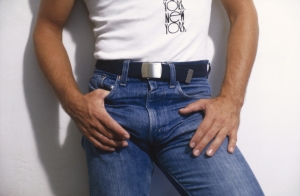 Mark James lives in San Francisco and is a frequent contributor to Film International.