The Past As It Is: Agnieszka Holland’s Burning Bush

Agnieszka Holland’s three part mini-series Burning Bush (2013) opens with a pictorial and musical energy that swings like a pendulum between freedom and oppression. Just as day and night are two fundamental ontological opposites, so too are these titanic forces.

Holland infuses the show’s title sequence with a youthful vitality that is mixed with the maturity of age. What else is this title sequence, with its montage of youngsters dancing intercut with the images of violent oppression – of tanks on the streets? What else is this title sequence that offsets the raucous freedom of life against the oppression of steel and machinery? The music echoes a sense of rhythmic doom, of uncertainty as the fractured beats disrupt the energised feeling, and allow the shadows of angst to creep up on us as the music fades to the hum of the machines of war and civil unrest.

Burning Bush tells the real life story of Jan Palach, a history student in the Soviet occupied Czechoslovakia who protested the 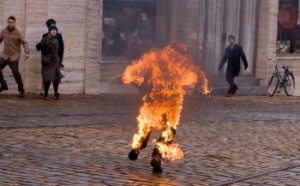 occupation of his native homeland by setting himself on fire in 1969. His character defamed by leading Communist Vilém Nový (Martin Huba), it falls to the charismatic and idealistic female lawyer Dagmar Buresová (Tatiana Pauhofová) to represent Palach’s family in their libel suit against Nový.

Holland, along with first time writer Stepan Hulik, walks a fine line with their cast of players. Seemingly Hulik and Holland are disinterested in creating a simpleminded cast of heroes versus villains. Rather their predominant interest lies in creating a sense of nuance through their human chess pieces involved in a legal game of cat and mouse. They do not resort to vilifying, as one might expect, and thereby sidestep creating a simple moral play of good versus evil.

Instead their interest lies in the shades of choices or manipulated choices, and the impact on our ideas of individual and social morality. We are invited to judge these characters, to even condemn them, but the invitation is played with an underhanded subtlety as we are eased into an uncomfortable understanding of why they make these indifferent or immoral choices. They do, however, still incorporate the heroes versus the villains of the piece – those who revel in their primordial survival instinct, whilst also painting in shades of grey those who are caught in the middle, and are not inclined to indifference to the injustice of the situation.

Burning Bush is a compelling moral meditation on a country or populous gripped by fear, whose moral compass is not so much crippled by fear as is their strength of resolve to confront evil. The conscious awareness of morality thrives, and instead their characters come to resemble children in the eyes of the regime, divided between those children who begrudgingly obey, and those who are sent to stand in the corner, as the old Victorian expression “Children should be seen and not heard” echoes loudly.

Within the discussion of an historical drama, it is not out of context to recall the explanation of one of my history teachers that we 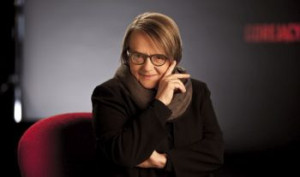 cannot judge how we would have acted in the past based on our present life experiences, which are out of time and out of context. Holland and Hulik not only realise this, but they embrace it and refrain from an exclusivity of judgement, to instead offer a complex and sympathetic view of the plight of the characters in their dramatization of a chapter in Czech history. Her maturity of age, her settled approach in bringing Hulik’s teleplay to the screen affords Burning Bush a mature complexity that stays away from hard-line idealism, romanticism and high drama.

“Man is really just an animal. He cares only for himself and his young. In the end he still does what he is told.” This single line spoken in the third episode reverberates both retrospectively and throughout the remainder of Burning Bush’s drama, connecting it to the ideology of the series and the confrontation at its heart.

Whilst there is the biblical and Shakespearean quote of the sins of the father being revisited upon his children, Burning Bush reflects on the sins or rather choices of the children being revisited upon their parents. Whilst the youth cloak themselves in impulsive idealism with a strong desire to change the world, their parent’s idealism is cautious and less impulsive.

But at its heart Burning Bush is a story of survival and self-preservation, of the convenience of morals and the compromising of such ideals in the great personal and individual conflict of who we are willing to betray to save another. From here stems the powerful study of human drama as we witness soldiers become injured comrades, and the impending sense of futility of our dreamlike manipulated expectations. Burning Bush is not a dream; it is a portrait of reality, of the personal in the microcosm of the national. Echoing loudly in Burning Bush are the words of Jeffrey Goines (Brad Pitt) in Terry Gilliam’s dystopian science-fiction drama Twelve Monkeys (1995): “There’s no right, there’s no wrong, there’s only popular opinion.”

To counter the popular opinion or will of governments and totalitarian regimes is the willingness of the individual to sacrifice oneself for an ideal, through both the physical and metaphorical death – surrendering one’s actual life or the surrendering of a lifestyle one has become accustomed to. But ironically this change emerges through defeat rather than victory, and from this emerges the commentary on the struggle to unite people; to rally them to a cause and embrace liberation from fear as a group who desire the most basic of human rights: freedom.

Running at nearly four hours Burning Bush is a well-paced and immersive drama, intelligent in its construction. The drama feels 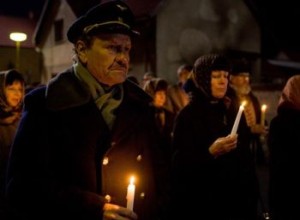 authentically real as opposed to a dramatization. Holland masterfully merges performance, image and sound to create aesthetically haunting moments with a precision of timing that touches our sensibilities and makes us feel for the characters. There are those moments viewing Burning Bush where one feels as though they are holding their breath, either hanging on to every word or sound or image. This strong sense of feeling, the fire that Holland ignites in us, tempered by an intelligent and less impulsive judgmental response, identifies her historical drama as a seminal work that touches the heart of the tragedy and triumph that it is to be human.

If filmmaking can stargaze to the future then it is equally interested in looking to the past, and reminds us of one fundamental truth, that the battle for total uncompromising freedom still rages. The reason to celebrate Burning Bush is not so much that it humanises other people as film, television and, more broadly, art has a propensity to do, but it humanises the past and reconnects it to the youthful present.