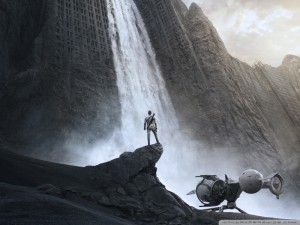 “What has been will be again, what has been done will be done again; there is nothing new under the sun.”

Ecclesiastes chapter 1, verse 9, describes succinctly the new Tom Cruise blockbuster. Oblivion (2013), the sci-fi extravaganza written, directed and produced by Joseph Kosinski and based on his comic-book of the same name, though visually arresting, offers little original beneath its glossy surface. 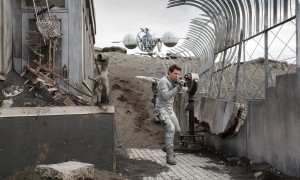 After the destruction of the Moon sixty years ago, Earth has been abandoned by humans who have left and set up a colony on Saturn’s moon Titan. Jack (Cruise) and Victoria (Andrea Riseborough) form a maintenance team, left behind to take care of the security drones that protect a series of giant Hydro-Rigs which extract what water is left from the husk of the slowly decaying Earth. Under the supervision of Sally (Melissa Leo), a military commander who controls operations from the safety of “The Tet,” a giant mothership hovering far above the Earth, Jack and Victoria repeat their daily rituals, putting in the time before they too can leave to start their new life on Titan. Until suddenly one day Jack’s routine patrol of the Earth’s surface is disrupted with the arrival of the mysterious Julia (Olga Kurylenko), whose appearance as if from nowhere has dramatic repercussions for them all. 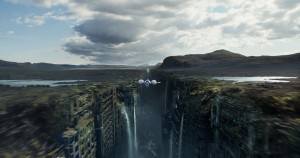 Oblivion looks stunning. Fortunately Kosinski and his team have eschewed the obvious temptation to make the film in 3D – refreshing considering the modern propensity for using the process in anything taking place beyond the bounds of our everyday experience. Earth (which, Oblivion being a Hollywood film, of course consists of what is left of New York) is a wonderfully realised landscape of arid plains pitted by massive craters, and half submerged architectural relics of a long lost human age. This endless vista of sand dunes and deep, shadowed gullies, contrasts starkly with the new world which sits above the clouds. Here Jack and Victoria live in a glass house that looks out on an interminable sea of blue, in a futuristic fantasy which provides the film with some of its most mesmeric images – such as the transparent lap pool suspended in space from the side of the house, in which the couple unwind each day after their evening meal.

However, beautiful though these visualisations of things to come are, they also reflect Oblivion’s shortfalls. The clinical sparseness of the cloud house and the soullessness of its environs in the outer stratosphere only serve to emphasise the lack of depth within any of the characters or, truth-be-told, the story itself. Who are Jack and Victoria and what is their real relationship? Why are they apparently the only human beings left taking care of the Hydro-Rigs? Though the film goes some way to explaining these factors, along with Jack’s connection with the enigmatic Julia who quite literally “falls” from the sky, the resulting reasoning often seems laboured and confusingly convoluted.

However the film’s biggest disappointment, and the thing which detracts most from its overall enjoyment, is its magpie-like approach of borrowing wholesale from every other major entry in the sci-fi genre over the last fifty years. The Statue of Liberty’s half extinguished flame rises from the sand as if lifted straight from Planet of the Apes (1968), whilst Jack’s climatic entry into “The Tet” is reminiscent of 2001: A Space Odyssey (1968). Add a selection of motley mercenaries left over from Mad Max Beyond Thunderdome (1985), along with so many oblique references to the original Star Wars trilogy that you loose count, and you can’t help feeling that you’ve seen it all before. 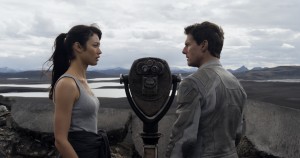 Where the acting is concerned you get what you’d expect. Cruise, as with everything he appears in, is the star around which his fellow cast members orbit. This is the kind of action yarn he could do with his eyes closed, his films becoming increasingly clone-like with simply a tweak in environment here or renaming of a character there to freshen things up. Of the support Kurylenko (who burst upon the cinema-going consciousness in 2008 as Daniel Craig’s love interest in Quantum of Solace) stands out, though even she is given little opportunity to shine spending most of her time looking perplexed, scared or a mixture of both.

Kosinski is quoted as saying that he wanted to pay homage to the science fiction films of the 1970’s. Unfortunately, with the summer season looming and so many new genre films flooding the market on an almost weekly basis, it takes filmmakers to look forward not back in order to create a lasting impression. Something which those behind Oblivion ultimately fail to do.