“Shift to Sincere”: A Gray State 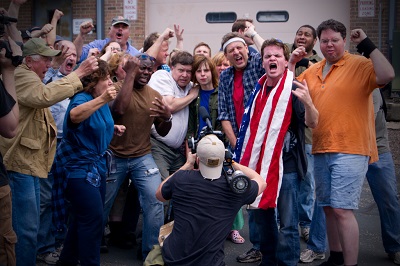 In January of 2015 screenwriter and aspiring filmmaker David Crowley was found dead along with his wife, Komel, and five-year-old daughter, Raniya, in their Apple Valley, MN suburban home. Crowley had self-funded a promotional video for a proposed film called Gray State, a dystopian vision of America in which protesting citizens are rounded up by soldiers and then summarily executed. (Judging by the “FEMA” emblazoned in white on these soldiers’ riot shields, they are part of the Federal Emergency Management Agency. Viewers of the film, I suppose, would find out when this agency got its own army.) There are also scenes of families being surveiled on hidden camera while they eat their dinners, children getting branded with some kind of scanable barcode-type thing, and a fellow in a Guy Fawkes’ mask executing people via guillotine. Much of it was shot with volunteer actors on a blank soundstage, the background all CGI, and it looks like it. Still, it was an impressive enough start to not only generate online fan interest and crowd-sourced funds to allow Crowley to write fulltime, but was optioned by a couple Hollywood producers. Before the film could be made, according to the official police report, Crowley killed his wife and child and then turned the gun on himself. But the story is not over. An underground movement of conspiracy theorists have been, and are still, in the process of spinning the tale that Crowley and his family were murdered by government forces, supposedly to prevent his film from being made. On the bloody page of a notebook, the words, “Submit to Allah NOW” were written. And on the wall of the living room, the words “Allahu akbar” (“God is great” in Arabic) were written in Komel Crowley’s blood.

This is the crime that Erik Nelson explores in his new documentary, A Gray State. Nelson is a frequent collaborator with Werner Herzog, acting as producer on several of Herzog’s documentaries ever since his 2005 masterpiece Grizzly Man (Herzog returns the favor and serves as Executive Producer for A Gray State) and occasionally directing (the 2008 Harlan Ellison documentary Dreams with Sharp Teeth). Nelson’s exploration of the sad, compelling story of David Crowley is fascinating, horrifying, and ultimately unresolvable. Like Timothy Treadwell in Grizzly Man, David Crowley left behind a detailed digital account of his life and the frayed psyche within that life so that we can watch all the moments leading up to his demise and the destruction of those close to him. Unlike Herzog’s film, Nelson doesn’t narrate, but lets his interview subjects tell their own stories, interspersing talking head interviews with voice-over recordings and self-made films of Crowley speaking and performing for posterity. 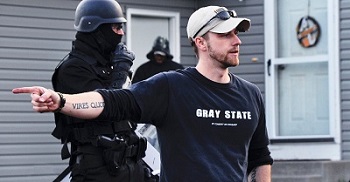 A Gray State opens on a black screen. We hear what we will come to learn is the voice of David Crowley speaking in rapid-fire, stream-of-consciousness flow: “Shitty pen, shitty pen… Gray State is all me…shift to sincere…” and so on. It’s an unnerving start and sets the tone for what will be a deep-dive into a mind in the process of breaking up. Like a lot of young men hungering for adventure, David Crowley joined the military and deployed to Iraq in 2006. After Iraq, he was stationed in Fort Hood, TX, and there met Komel. Not long after, he was stop-lossed, the controversial practice often used during the wars in Iraq and Afghanistan to forcibly extend soldiers’ enlistment past their active-duty agreements, and he was sent to Afghanistan. Whereas David seems to have had a relatively positive experience in the war in Iraq (despite seeing some grisly violence), he was bitter and angry about being stop-lossed and this, apparently, is what led to his interest in writing a film about a near-future dystopian government engaged in violent overreach.

We learn about the deaths, about Crowley’s life, early in the film, and so the majority of the documentary is essentially an examination of the evidence, sifting through it and viewing it from different perspectives. Nelson interviews the neighbors, including the one who discovered the bodies. He interviews the police, he interviews the Fox newscaster who reported on the murders and their aftermath. He interviews Komel’s friends, Crowley’s film collaborators, and his father and brother. He interviews a conspiracy theorist and sits in on a Skype conversation he has with another one as they bat around presumptions about how it’s obvious that the government murdered this mostly unknown filmmaker. Both Skypers are evidently convinced that there is no way the official version of events can be true. A Gray State is not a whodunit. We know the official story and the online conspiracy hordes, not generally interested in narratives that don’t gibe with their chosen ones, have urged their readers not to even see the film. It’s more of a Why-did-he-do-it? film.

Crowley obsessively filmed himself. When he was a teenager engaged in paintball competitions, he often brought along his father’s video camera to film himself and his friends in their fatigues with their fake guns. Apparently, he never outgrew it. There is a lot of embarrassing footage of Crowley in his garage in fatigues, grasping an automatic weapon, posing for the camera with heavy metal music blasting. Or running through the early morning mist like he’s on a mission. He films himself exercising and shouting at the camera. Some of the footage is of he and his family. There is one disturbing scene where he has a cheerful conversation about killing babies with his four-year-old daughter and another where she fantasizes about a bloody room and he eggs her on to elaborate on this grisly image. In another, he sneaks into a room where she is crying to film her unawares. In addition, Crowley clearly had delusions of grandeur, referring to his past life as “a soldier jumping through hoops for government” and his current one as “a warrior that is the artist.” Nelson replays the same recording from the opening of the film for the two producers, “the two Mikes” as Crowley referred to them. This is a recording Crowley made the morning he was going to meet them to finalize their agreement. After hearing it, they’re angry. They say that this was a Crowley they never knew. Whereas they believed they were going to collaborate with him, Crowley obviously saw their working relationship as adversarial, one in which only one side could win. Although he never uses the term, Crowley obviously viewed himself as and auteur, one who had, as he says more than once on his self-recordings, “complete control” over his project. As he became more assured of the rightness of his vision and the wrongness of anyone who disagreed with him, he edged his collaborators out of the project, stopped returning the calls of his producers. He and his wife cut out most of their connections including family. Komel disconnected her business from her partner’s. When Komel’s worried sister drove seventeen hours from Texas to see her, David wouldn’t let her in the front door.

One of the few flaws in the film is that not one of Komel’s family – not her father, sister or mother – were interviewed for the film. They are Pakistani Muslim immigrants and their silent presence on the fringes of the story is disturbing more about what it doesn’t tell us than what it does. David dominated Komel, made her move far away from her family, married her right before he was stop-lossed to Afghanistan as if to claim her before he left. He then kept her, and then their daughter after she was born, away from her family, classic abusive behavior. There is no statement made in the film regarding Komel’s family, no suggestion that her family was unwilling to be interviewed. And, in fact, Alec Wilkinson, the author of the article “Death of a Dystopian” in the April 10, 2017 issue of The New Yorker, managed to interview Komel’s entire family. It seems like a troubling omission in the film, especially considering Crowley’s celebration by anti-immigrant conspiracy theorist Alex Jones and others who argue for closed borders and flirt with white nationalism.

A Gray State is the poster boy for Occam’s razor. William of Ockham was a medieval friar who put forth the principle that the simplest answer is usually the right one. This is a theory that many conspiracy theorists – mostly white men who wouldn’t have had much of an audience before the invention of the internet – might want to read up on. The alternative to the official version of events is to believe that the government assassinated a filmmaker for a fictional film that would have gotten lost in all of the other recent films and TV shows that view the near-future US as a dystopia: The Hunger Games franchise (2012-2015), The Handmaid’s Tale (2017-present), Blade Runner 2049 (2017), The Man in the High Castle  (2015-present). And if you consider the B and C movies in just the last few years, which Gray State would more likely than not have been among, the list goes on and on way too long to list even in part here. It becomes fairly clear rather early in the film that the only alternative to the official version of events is the one pedaled by the two conspiracy theorists on Skype, the kind of people who think that Alex Jones and his Info Wars program is a reliable source. Unfortunately, this says a lot about the world we live in today, that probably many of those fans have been much more engaged with the conspiracy than they ever would have been by the actual film should Crowley have managed to make it. It says something very complex and disturbing about a segment of US culture right now, that there are people who so desperately need to believe in conspiracies which support their most paranoid visions of the world, to the point that they’re blind to real injustices, inequalities, and outrages in their midst.

John Duncan Talbird is the author of the limited edition book of stories, A Modicum of Mankind (Norte Maar) with images by artist Leslie Kerby. His fiction and essays have appeared in Ploughshares, Juked, The Literary Review, Amoskeag, Ambit, and elsewhere. He is an English professor at Queensborough Community College.